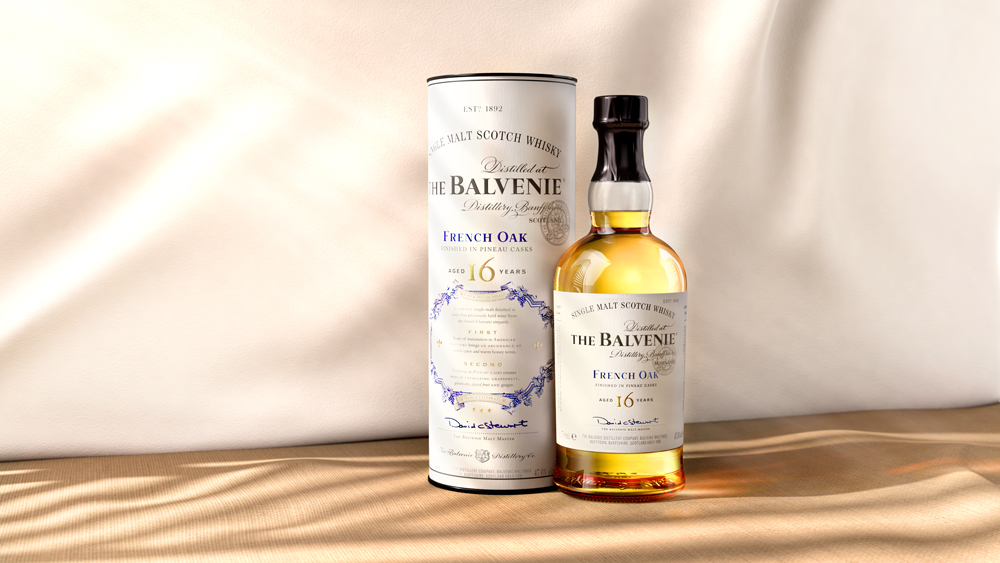 For the first time in nearly a decade, Scotland’s The Balvenie Distillery has added a whisky to its core lineup of cask-finished expressions. The newest member of the team is the premium Balvenie French Oak 16-Year-Old, which is now the second oldest off the bench.

The core Balvenie whiskies are all stellar examples of cask finishing in single malt scotch: DoubleWood 12-Year-Old (finished in sherry casks), Caribbean Cask 14-Year-Old (finished in rum casks) and Portwood 21-Year-Old (finished in port casks). The new French Oak follows suit, giving the whisky a secondary maturation period in Pineau French oak casks–a first for the distillery. Pineau des Charentes is a specific style of fortified wine from the Charentes region of France. It is made from unfermented grape juice to which cognac eau-de-vie is added before it is aged. The exact amount of time the whisky is finished is undisclosed, but it is non-chill filtered and no color is added.

According to Balvenie malt master David C. Stewart MBE, the use of these French wine casks gives the whisky a light, fresh finish. “Pineau des Charentes’ vibrant and distinct flavors, extracted from our signature double maturation process,” he said in a statement, “not only bring greater depth to our range but deliver an element of luxury and craft that is unmistakably The Balvenie.” Stewart is something of an expert in the art of cask finishing, having been one of the first to bring this technique to the world of scotch whisky nearly 40 years ago.

The Balvenie has not been holding back its whisky this year, and there have been several new launches already including the Rare Marriages series and a new 27-year-old with the whimsical name A Rare Discovery From Distant Shores. The new French Oak 16-Year-Old is not quite as expensive as the luxury Compendium series (which can fetch upwards of $100K for a set), so you should be able to find it at select retailers and online with a “comme ci, comme ça” SRP of $174.99.