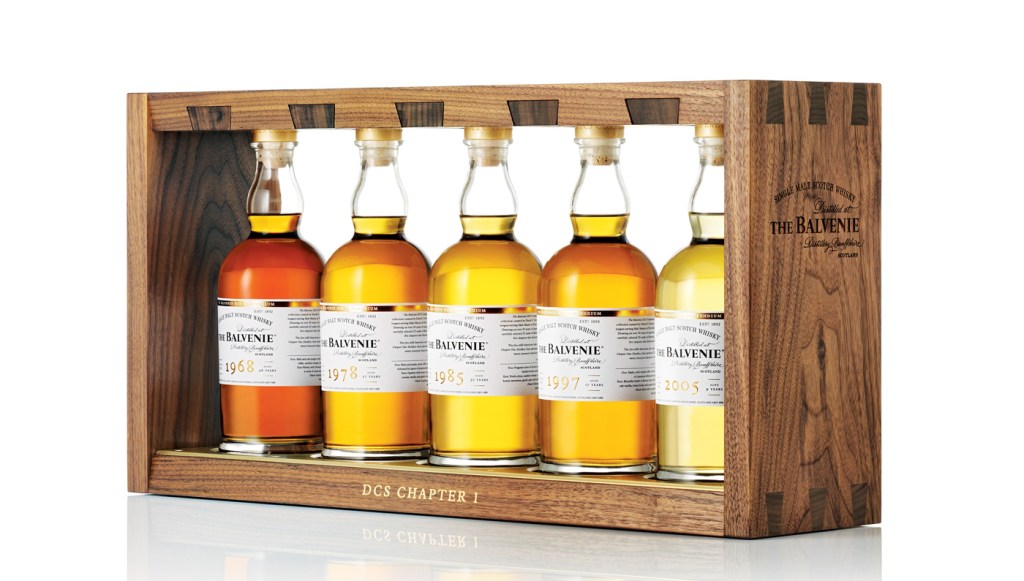 In one of the warehouses at the Balvenie in Scotland’s Speyside region, the distillery’s malt master, David Stewart, drops a metal bottle into an open cask of 14-year-old whisky and then, once it is filled, retrieves it with the attached metal chain. “Over time, whisky takes on more oak, and this can dominate, but I didn’t want that,” Stewart explains as he pours the whisky into a tasting glass and raises it to his nose. He estimates that he has “nosed” whisky from about 400,000 casks during a career that began in 1962, when he was 17. “It needs to keep the flavors [the Balvenie] is known for: honey, vanilla, butterscotch, and marzipan.”

These flavors are present in the Balvenie’s latest release: Distillery Style, a five-bottle collection of whiskies of various ages—from 10 to 47—all matured in American oak casks. It is, according to the company, the “first chapter” of the DCS (for David Charles Stewart) Compendium. Every January for the next four years, the Balvenie will release another five-bottle chapter in the DCS Compendium. This year’s release is priced at $45,000 and comes in a wood-and-brass presentation box. The bottles are accompanied by a book in which Stewart explains why he selected the DCS Compendium’s whiskies from the hundreds of thousands of casks in the Balvenie warehouses.

“I had a good idea which casks were destined for [the DCS Compendium],” Stewart says while sampling the Distillery Style whiskies, “but it was hard to narrow down.” He says it took him nine months to choose all the whiskies. They include the Distillery Style’s 2005 single malt, which is among the youngest Balvenie releases, and the third chapter’s 1961 whisky, which will be the oldest-ever offering from the distillery.

The Balvenie opened in 1892 and initially produced single-malt whiskies only as ingredients for the blended Scotch sold by its parent company, William Grant & Sons. Stewart assumed the role of malt master for the Balvenie, Glenfiddich (which is also owned by Grant), and Grant in the early 1970s. In the 1980s the Balvenie released the Balvenie Classic, which is considered the first “finished” whisky. Stewart is credited with inventing this now widely imitated technique of moving whisky from one type of cask to another toward the end of the aging process.

That experiment proved successful. The DCS Compendium’s final chapter, Malt Master’s Indulgence, will include some of Stewart’s other triumphs, such as his use of a Spanish fino-sherry cask. “It is almost always oloroso casks that are used, and the flavor comes more from the wood than the sherry,” he says. “But the fino is very different: More flavor comes from the sherry.”

“Some people will hold onto them,” Stewart says of the DCS Compendium’s whiskies, “but it’s my hope they actually drink them.”