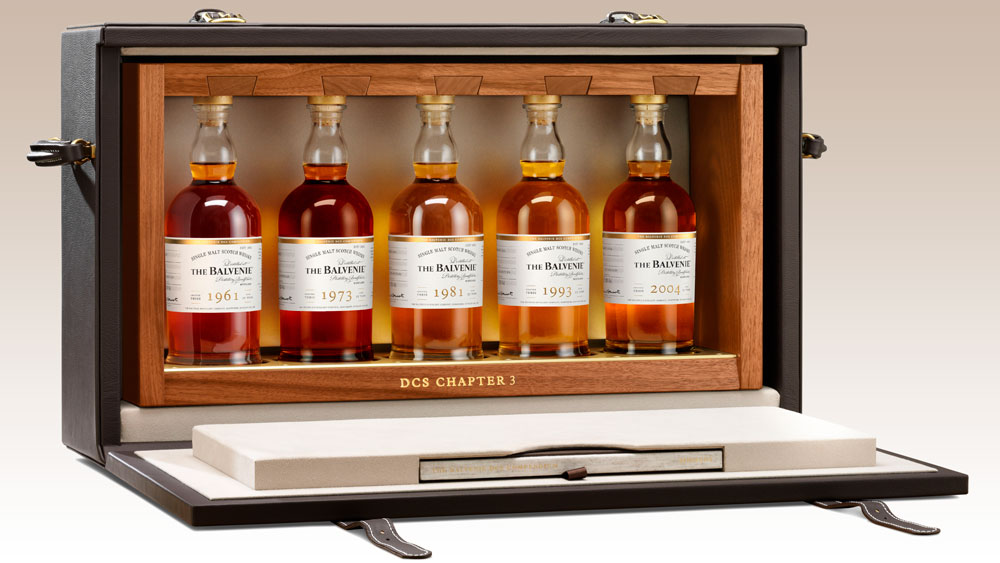 Perhaps no one person’s legacy is as entwined with that of a whisky distillery as David C. Stewart and the Balvenie. The distillery was founded in 1892 by William Grant, who a few years earlier had built the neighboring Glenfiddich distillery. But the Balvenie’s history as we know it really begins in 1962, when Stewart began his employment there. 55 years later, Stewart, known as malt master by the brand since 1974 and as MBE (Member of the British Empire) by the Queen since 2016, shows no signs of slowing down.

In recent years, however, he’s begun to consider his legacy. Rather than write an autobiography, he’s decided to curate his career through The DCS Compendium, a collection of 25 exclusive Balvenie whiskies divided into five “chapters,” each with its own theme. The Compendium launched in 2015, with a new chapter to be released each year through 2019.

The theme of the DCS Compendium Chapter Three ($60,000), “Secrets Of The Stock Model,” is described by the brand as “an explanation of the arcane decision-making processes of maturation and stock management.” It plays like a greatest hits collection, with a quintet of exclusive single cask bottlings from the 1960s to the 2000s, one per decade.

The most noteworthy whisky of the group is the oldest Balvenie ever released, a 55-year-old that was distilled in June, 1961 — a year before Stewart’s tenure began. Matured in ex-Oloroso sherry hogsheads, Stewart describes it as “representative of the whisky we distilled in those years.” It’s a little lighter, more floral, and maltier than the Balvenie we know today, a fascinating time capsule and a tremendous dram.

Drinking the Balvenie through the decades is a fascinating dive into the distillery’s history and the different techniques Stewart employs. The 1970s are represented by a 1973-vintage malt matured in Oloroso sherry butts, with deep notes of candied fruit and baking spices reminiscent of a Christmas fruitcake. An American oak-matured beauty dates from 1981, a down year for the industry during which the Balvenie produced little whisky, but the quality clearly didn’t suffer. The signature vanilla-and-honey notes are deepened and made richer by more than three decades in oak. The 1990s bottling dates from 1993, the year the Balvenie’s signature DoubleWood whisky was introduced. Matured in refill American oak hogsheads, it’s another quintessential Balvenie, with honey and vanilla balanced by dark fruits and a gentle spice. Lastly, a 2004 malt represents the 30th anniversary of Stewart’s being named malt master. Matured in Oloroso sherry butts, it’s rich and fruity, with the sherry butts imparting citrus and raisin notes.

Previous Compendiums have been available only as a set. This time, for those who miss out on the 50 sets available worldwide, there’s some consolation. The Balvenie 1973 Aged 43 Years ($15,000) is available individually in limited quantities. And for those who want to try before they buy, all five whiskies are available by the pour, either individually or as a flight ($5,000), at the Ty Bar at the Four Seasons Hotel in New York City.