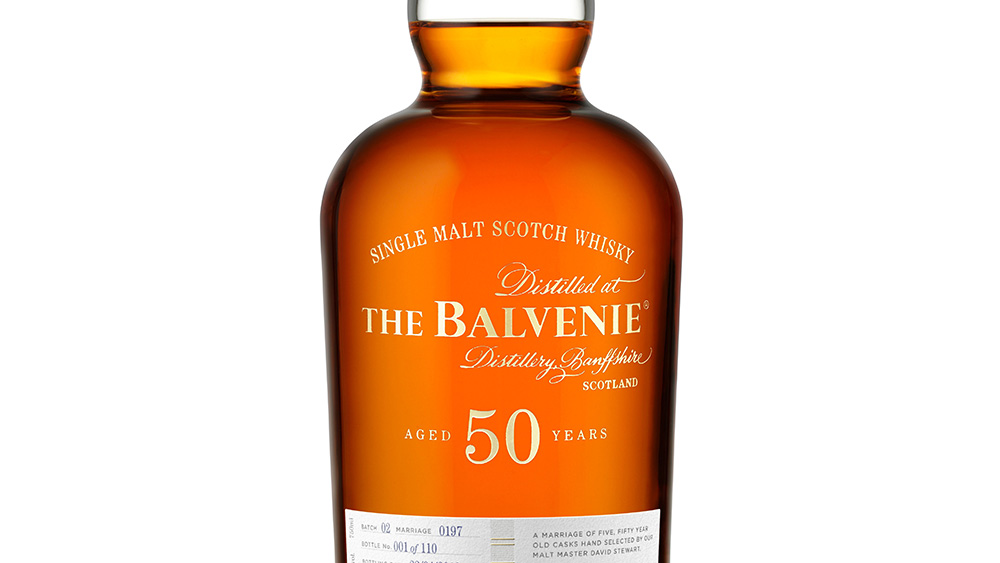 The Balvenie Single Malt Scotch’s malt master David Stewart has been making whisky for a very long time. Long, as in when Stewart was hired on at The Balvenie’s parent company William Grant & Sons, John F. Kennedy was still alive and the Beatles had yet to step foot in America. That long. Fifty-seven years, to be exact. So as you might imagine, Stewart, the elder statesman of malt masters, knows a thing or two about the craft. The amplitude of his mastery is manifest in the just-released The Balvenie Fifty: Marriage 0197, a mash-up of highly rare whiskies aged 50 years or more.

The Balvenie launched its “Marriage” series in 2018 with Marriage 0962, a blend drawn from four different casks, each one five decades old. Marriage 0197 is essentially the same recipe, with the juice from another 50-plus year-old barrel (#9920) added to the mix. The final liquid, bottled at 84 proof, is rich and deep on the nose with an abundance of oak tannins, dark fruits, bitter chocolate and intense spice.

A cynic might dismiss this new twist on an old recipe as nothing more than a dodgy means of making a buck, but it most assuredly is not — a buck, that is. Indeed, should you manage to locate a bottle of 0197, it’ll set you back $38,000. And pay the cynic no mind, because the truth is blending antiquated liquids is an extremely difficult task due to the variances of strength, depth and flavors that result from 50-plus years of wood influence.

“The difference between Marriage 0197 and 0962 is only one cask, yet there is an incredible distinction amongst the two expressions,” says Stewart. “The addition of cask 9920 has added an extra level of depth and intensity, with tobacco and sweet leather initially warming the palate, closely followed by rich, sweet, citrus oak. It has been a real joy to work with some of The Balvenie’s oldest stock once again and it’s an honor to be able to share such a unique whisky with the world.”

Of course, for 38 Gs, Marriage 0197 comes correct with some spiffy packaging. The hand-blown, crystal decanter is a sleek reinterpretation of the classic Balvenie bottle shape, which itself mirrors the silhouette of the copper stills at the distillery. Each bottling is housed in a walnut wooden tube adorned with brass, handcrafted by renowned Scottish craftsman, Sam Chinnery.