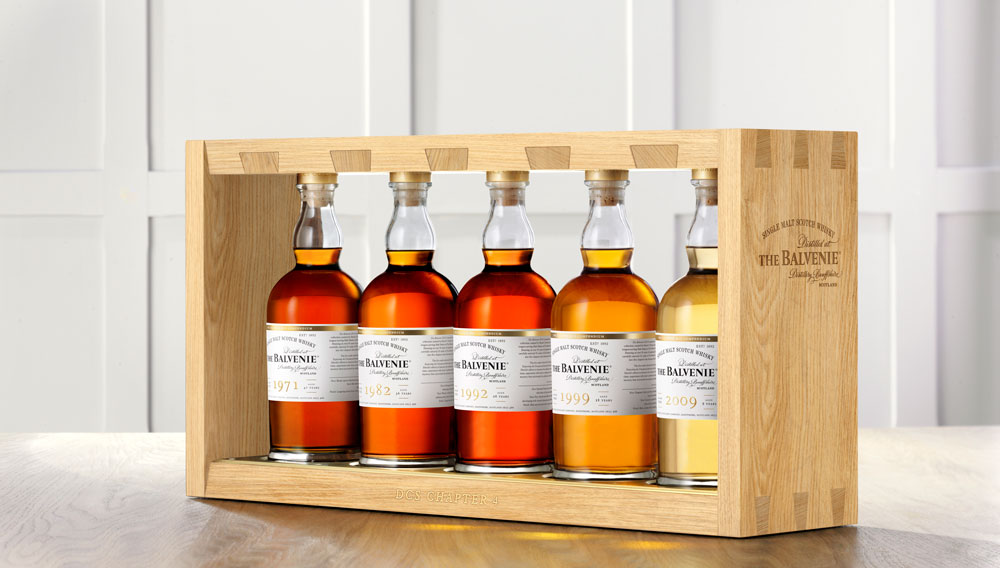 Dotted with dozens of distilleries, Scotland’s verdant, hilly countryside is a virtual mecca for whisky connoisseurs. This fall, Scottish distiller Balvenie is taking the distillery tour concept a step further by partnering with Christie’s Auction House to create an all-encompassing lot for whisky lovers. The curated collection includes Balvenie DCS Compendium Chapter 4 (a set of five rare whiskies valued at $40,000), a handcrafted Morgan Roadster with custom Balvenie interiors (valued at $80,000), and a trip to Scotland for a tour of the Balvenie distillery (we’ll say it: priceless).

Balvenie’s longtime malt master, David Stewart, oversaw the fourth chapter of the DCS Compendium collection. Each of the five single-cask malts are presented in a cherrywood-and-brass frame handcrafted by Scottish craftsman Sam Chinnery. And the two-seat Morgan Roadster—which features a V-8 engine, a cream-beige body color, and customized Balvenie branding on the headrest and interiors—serves as the ultimate road trip car for those who want to embark on a self-guided distillery tour (designated driver in tow).

To round out the package, the auction winner will also receive a trip to whisky country, where he or she can tour Balvenie’s distillery in Dufftown, Scotland (around three hours from Edinburgh). Distinguished for growing its own barley, using traditional floor maltings, and having coppersmiths on site, the distillery provides a firsthand look at how Balvenie’s distinctive whisky is made.

“We are honored to be working closely with the Balvenie and delighted to bring this unique lot to sale,” says Chris Munro, Christie’s head of Wine Department for the Americas. “It’s also an interesting lot for us, as it combines luxury, handcrafted goods with a one-of-a-kind experience.”

The items can be viewed by special appointment with Christie’s, and bids are accepted both in person and online (the lot will only be visible online starting September 25). Bidding will take place from September 25 to October 9. Estimated to be worth between $100,000 and $150,000, the whisky-centric offering is the highest-value lot ever to be offered in the category at an online sale.