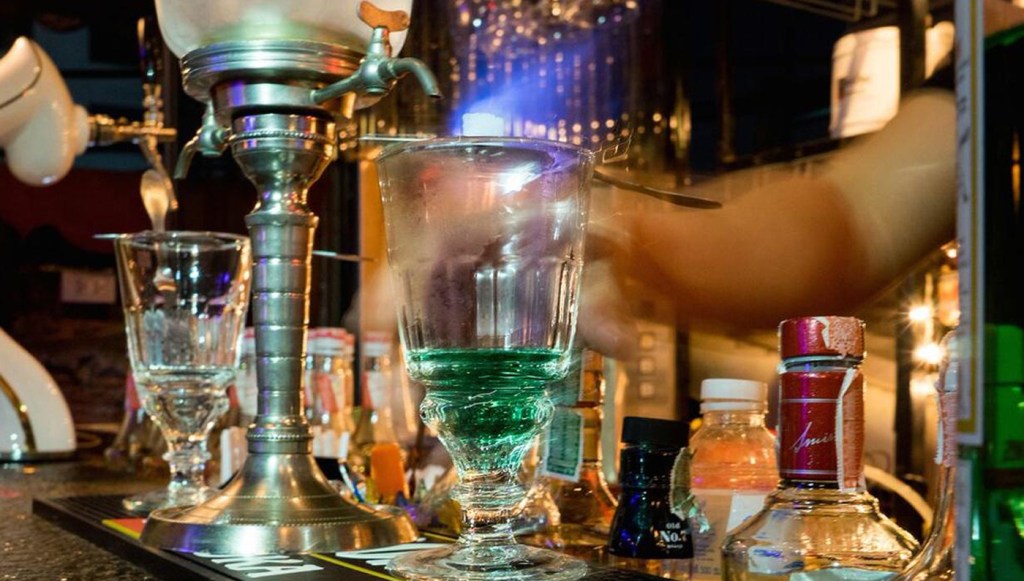 When one says absinthe, you’d probably think France. Maybe Switzerland, or even The Czech Republic. You should also be thinking Bangkok.

Tucked inside a funky, rather ancient-looking shop house in the city’s Sathorn neighborhood is a serious selection of the Green Fairy. “We usually carry six to 10 absinthes, according to availability,” says David Jacobson co-owner of Smalls. “They’re hard to keep stocked, because they’re very popular.” Inside Smalls, drinkers will also find an equally fine rare and premium spirits list, with Scotch single malts, Southern small-batch bourbons, and gins from around the globe.

You could put this bottle list in nearly any metropolitan bar and draw the attention of the educated drinkers in town, but the design of Smalls is a further enticement. You approach a three-level, wooden shophouse, with a tangle of electrical wires swooping across the front. A splash of faded yellow neon announces the bar’s name in lowercase letters above the door. Across the dim threshold, you a enter a glow of deep reds and greens; a microphone in a dark corner; a bartender setting sugar cubes on slotted spoons in front of a row of barstools. This front space is best for Wednesday nights, when Smalls plates up the city’s avant garde jazz musicians—the Dan Phillips Quartet and Space Trio+1. “There are many easy-listening cover bands in Bangkok, but at Smalls we have, without a doubt, the hardest-core jazz policy in the city,” says Jacobson.

Keep moving toward the staircase in the back. It winds up a dark and listing corridor, each step feeling more and more like Alice in Wonderland invited you to drink with her, if you’re just willing to go all the way. Along the walls, paintings, portraits, and photographs of every size loom haphazardly.

The second floor of Smalls is designed for conversations. A smattering of tiny tables and an eclectic mix of chairs flood out to the prime spot on this floor: the rickety balcony overlooking the street scene below.

“Both my partner Bruno and I were tired of soulless, commercial, corporate-looking bars,” says Jacobson. “You know, the bars with the same bottles lined up in a row, with “ye old fonts” as signage, white subway tile, and a bicycle suspended from the ceiling. We wanted a friendly, soulful, retro, somewhat French-y atmosphere that was handcrafted; where the colors and lighting were inviting. We wanted a conversation bar for adults that was innovative.”

You’re probably not drinking a glass of aged rum or esoteric absinthe in Bangkok right now. But maybe you should be. Life is short. Smalls is worth the flight.