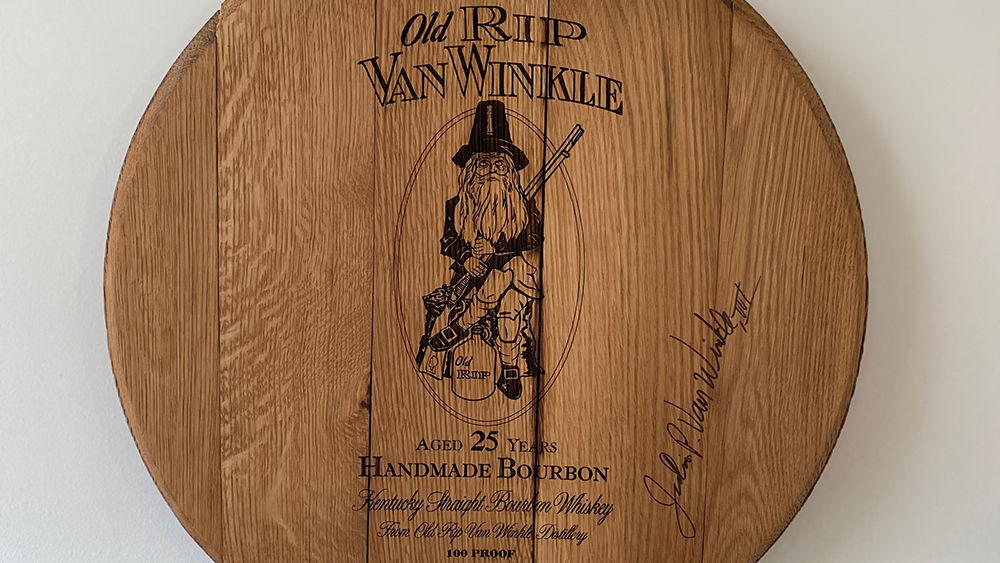 Back in 2017 Julian Van Winkle III, grandson of Julian “Pappy” Van Winkle, Sr., in conjunction with Buffalo Trace Distillery, released his family’s oldest bourbon ever, a 25 Year Old Rip Van Winkle—surpassing even the highly revered Pappy 23 in age and scarcity. Distilled in 1989, and put into 11 American oak barrels, the whiskey had lost quite a bit to the angel’s share of evaporation. Only enough of remained to fill 710 decanters, which were sold for $1,800 each.

This bourbon won Robb Report’s Best of Best award that year and completely sold out. Those bottles that were not consumed have since soared in value on the secondary market. But in the current economic downturn caused by Covid 19, one bottle was recently auctioned for $17,000 by a Florida restaurant, but fetched $40,000, thanks to an appreciative philanthropist-customer.

Rather than search for another five-figure decanter of that 25 Year Old Rip Van Winkle, you can bid to own one of the barrel heads that was used to age this scarce whiskey. There were originally 22 barrel heads (one for each end of the 11 casks) but six have been lost over the years. Barrel head no. 9 (out of the remaining 16) has been refurbished and embossed with the Old Rip Van Winkle logo. This is rare enough, but it has been made even more collectible with the addition of Julian Van Winkle III’s autograph.

As conceived by Carrie Greener, one of Julian’s daughters and a great-great granddaughter of “Pappy” and on behalf of the Van Winkle family, the Pappy & Company retail outlet, this special edition barrel head is being auctioned online today, with 100 percent of the proceeds going to benefitThe Lee Initiative Restaurant Workers Relief Program, started by James Beard award winning chef Edward Lee, creator of Louisville, Kentucky’s 601 Magnolia, Milkwood and Whiskey Dry restaurants. The initiative operates in 19 cities where specific restaurants have been designated as relief kitchens. Out-of-work or furloughed restaurant workers are given food, supplies and support through this organization, which also prepares hundreds of to-go meals for needy people.

The internet auction, currently underway for this special edition barrel head, will end today, April 29 at 11:30 pm EDT. Enter a bid here or choose the $20,000 “Buy Now” option if you can’t wait to acquire this one-of-a-kind barrel head and do a good deed at the same time.