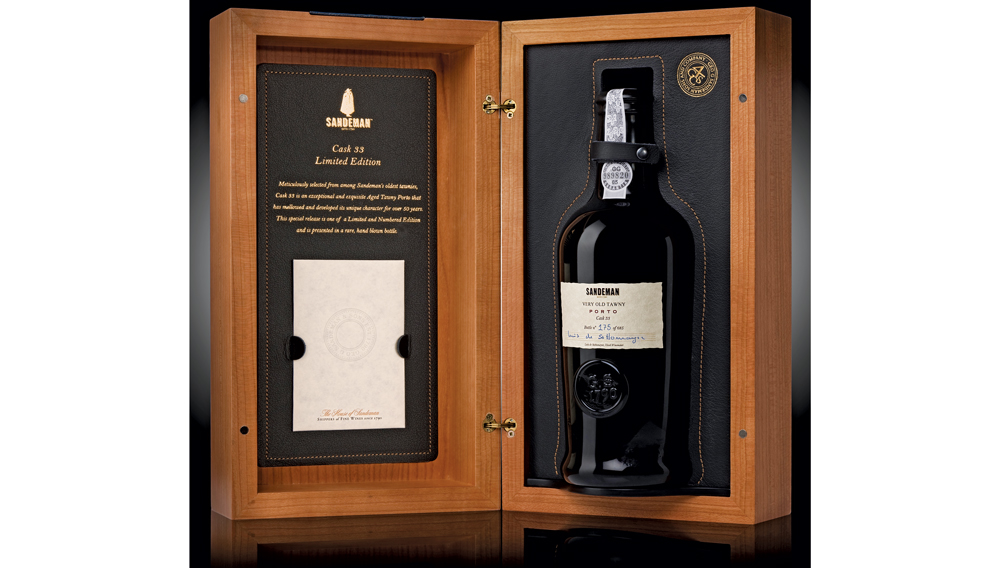 Sandeman extends its series of commemorative releases with a 50-year-old, single-cask port.

Tawny ports—traditionally designated as 10-, 20-, 30-, and 40-year-olds—are identified by the average age of the casks that compose the particular blend; thus, many of the finest tawnies hail from those houses with the largest and richest libraries. Founded in 1790, the house of Sandeman, which counts among the producers so blessed, has drawn on its vast reserves to mark the various milestones in its long history. For its bicentennial in 1990, Sandeman introduced a 30-year-old tawny, and to herald its entry into the new millennium, in 2000 it brought out a 40-year-old. Such is the size of the port house’s cellar that these unique releases have since remained in its regular line of products.

This year, however, Sandeman celebrates its 225th anniversary in a dramatically different fashion. For the first time, the venerable brand is releasing a one-time offering of a single-cask, 50-year-old tawny, Cask 33, which has been bottled much in the manner of a single-barrel bourbon.

Tasked with choosing just one extraordinary half-century-old barrel for the occasion, Sandeman’s head winemaker, Luis Sotomayor, focused on 40 containers that had been sequestered for decades under lock and key in the Largo Miguel Bombarda cellars at Vila Nova de Gaia. In terms of individuality, Cask 33 proved to be the most spectacular of the lot. The cask itself was built in the 1940s by Sandeman’s coopers, and since 1963 it has contained ports that originally ranged from vibrant 30- and 40-

Upon being opened, the handblown replica of Sandeman’s 1790 glass bottle containing the elixir from Cask 33 fills the air with thick, heady aromas of apricots and cinnamon. The first sip brings delicate, complex flavors of prunes, plums, walnuts, and stewed cherries, as well as subtle cedar, citrus, and vanilla.

“I think by its nature, character, and power, compared to the 30 and 40, Cask 33, as a 50-year-old, is not in the same sequence, because it’s such an individual wine,” says company chairman George Sandeman, who represents the seventh generation of the brand’s founding family. “Although it reflects the style and quality of the Sandeman stocks, it’s very separate from the other wines. In terms of intensity, it’s very much on a parallel with the 40 Years Old, yet it’s completely different.”

Only 685 bottles in presentation cases have been produced, 150 of which have been allocated to the United States and priced at $750 each. “It’s a wine that we won’t be seeing again,” notes Sandeman, “because it’s just one barrel. And now, it is part of our history.”