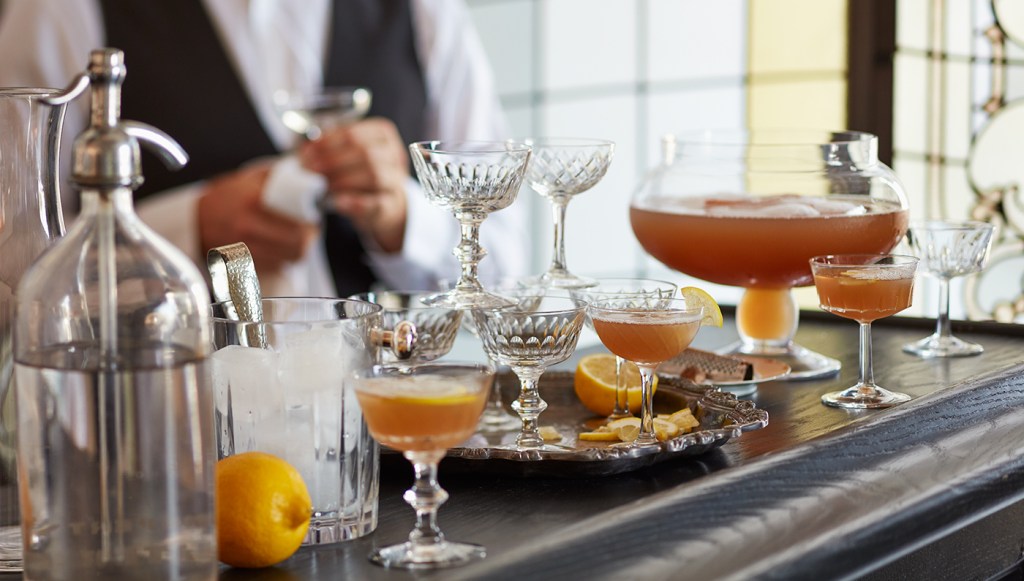 Special thanks to Gearys of Beverly Hills

When the London bartender and mixologist Tony Conigliaro bottled his first Manhattan a decade ago, he had no inkling his idea would be so prescient. Prebatching has now become the hottest technique on the cocktail scene. Conigliaro’s original inspiration was a bottle of 1920s vermouth. Marveling at its mellow and harmonious complexity, he wondered if cocktails aged in bottle would develop the same characteristics. Opening his first experiments a year later, he discovered they did, and the idea soon caught on.

London remains the epicenter for batching: Ryan Chetiyawardana (who worked for Conigliaro at his 69 Colebrooke Row establishment) has made waves with White Lyan, a bar where all the drinks are prebottled and served straight from the fridge, “finished” in front of the customer with only minimal embellishment. Bottled cocktails are also a staple at Dandelyan at Mondrian London, Chetiyawardana’s latest bar. The Craft Cocktail Co. in fashionable Bethnal Green and the whimsically named Worship Street Whistling Shop in hipster-hub Shoreditch are batching hot spots, too.

But the trend also has become firmly entrenched Stateside, ever since Jeffrey Morgenthaler (the Spirited Awards’ 2016 American Bartender of the Year) pioneered prebottled cocktails at Clyde Common in Portland, Ore. Morgenthaler’s inspiration? None other than one of Conigliaro’s bottle-aged Manhattans, which he encountered at 69 Colebrooke Row. Back home in Oregon, he added an old whiskey cask to the mix, and his barrel-aged Negroni soon became the stuff of legend. Now dozens of bars across the United States are experimenting with bottled cocktails.

There are even signs that batching, until recently the preserve of cutting-edge bars, is entering the commercial mainstream. The London department store Selfridges began stocking Chetiyawardana’s range of elegantly labeled Mr Lyan bottled cocktails in 2014. California’s Craft Distillers debuted its Fluid Dynamics line of barrel-aged drinks in 2013, and Utah’s High West Distillery now sells “Barreled” Boulevardiers and rye Manhattans. And with bottled cocktails on the retail shelves, the next frontier is the home.

In fact, batched cocktails should appeal to the fastidious host for much the same reason they’re so popular with bartenders and mixologists. While bottle- and barrel-aging (as well as complex preparations like White Lyan’s tincture of chicken bones dissolved in phosphoric acid) are probably best left to the professionals, everyone can enjoy batching’s other advantages. As Chetiyawardana is fond of repeating, “it’s all about total control”—by the time a batched cocktail is served, every aspect of the drink has already been leisurely perfected, with absolute precision and consistency, leaving hosts certain of guests’ enjoyment.

All the work, in short, has been done in advance. The drinks may be labor-intensive—Chetiyawardana estimates that the team at White Lyan spends “about 70 percent more time prepping than an average cocktail bar.” But service is as simple as opening a bottle. If that appeals to professional bartenders, experienced at working rapidly under pressure, it’s all the more attractive for the home mixologist: For hosts, batching means not only better drinks, but also a chance to dump the ice and shaker and relax with guests.

Let us not forget that batching, in its most rudimentary form, has been around for quite some time. After all, punch, the beverage of choice for 18th-century scoundrels, is nothing if not a batched cocktail. Mixed by numbers in a large bowl, punches require no shaking or stirring. Guests can even serve themselves—perfect for the crush of a well-attended soiree. Even bartenders appreciate the genre: Morgenthaler, for example, has a daily punch program at Clyde Common.

But if you’re willing to be a bit more ambitious, home batching can be taken further. The first step is to scale your recipe, which is simplified by applying some elementary math to reveal the ratio of ingredients. The next is to factor in dilution, if ice is critical to the character of the drink: prepare a test cocktail, weigh it, shake it over ice, and weigh it again. The difference is the amount of water contributed by the melting ice; and since 1 milliliter of water weighs 1 gram, figuring out how much water to add to your recipe is easy enough. For the math-averse, mix the batch ahead of time, but shake the drinks over ice before serving.

There are also a few fundamental don’ts. “Avoid eggs” is every bartender’s first piece of advice for the home batcher: They are liable to separate and demand a lot of shaking. Fruit juices and bubbly ingredients—whether sparkling wine, club soda, or tonic—must also be added at the last minute; they’ll lose their freshness and effervescence if there is any gap between mixing and service.

Within those parameters, give the imagination free rein. Simple syrups, for example, can be infused with teas and herbs to contribute depth and complexity. Chetiyawardana recommends using the humble microwave for garnishes to provide a sharp burst of heat that liberates flavor—whether it be the citrus bitters of orange peel or the warm spice of cinnamon. Consider preparing garnishes in advance to speed up the finishing of your drinks. Experiment with refrigerator and freezer times to find the optimum temperature for each recipe. Shaken over ice, most drinks will reach –5 degrees centigrade (23 degrees Fahrenheit), but that’s just a starting point when batching. And the best part? By the time your guests arrive, you can join in and enjoy the fruits of your labor, assured of your status as the ultimate cocktail craftsman.