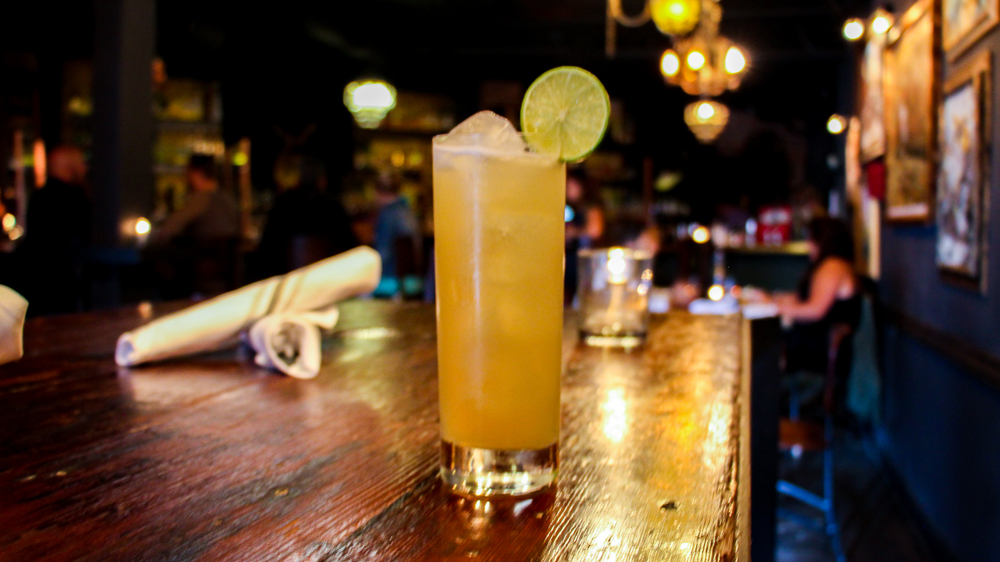 What is the Airmail? I mean, it’s obviously a cocktail, and everyone agrees that it’s rum, lime, honey and sparkling wine, but what is it? Is it a mint-less Mojito with different bubbles? A French 75 with rum? A honey Daiquiri with Champagne? And for that matter, when do you drink one—at a swim-up bar on vacation, or for boozy brunch on Sunday, or for a toast on New Year’s Eve?

Yes. The answer to all these questions is yes. One of the many charms of the Airmail is it can be anything you want it to be, and while the cocktail may defy easy categorization, the other thing everyone can agree on with the Airmail is that it’s the quickest way to get where you’re trying to go.

Airmail—the postal service, not the cocktail—has been around for a long time. Technically, correspondence through the air has a longer history still, one that involves very large balloons and trained pigeons and such, but the first airmail flight was in 1911 in California, carrying a total of three letters from Petaluma to Santa Rosa, a trip of less than 20 miles. And while these aren’t exactly auspicious beginnings, it absolutely captivated the public. Imagine witnessing the birth of air travel. It must’ve been unreal.

Airmail promised new possibilities for the whole world, but for an island like Cuba, the effect was magnified. Regular airmail routes between Key West and Havana started in the late ’20s to everyone’s delight, and when anything makes that big of a wave in the culture, it’s only a matter of time before someone names a drink after it: The Airmail cocktail was invented in Cuba, on or around 1930, put out in a promotional pamphlet by the then-Cuban Bacardi company. It was then, as it is now, rum, lime, honey and Champagne, and was at the time garnished with a novelty postage stamp.

The Airmail’s difficulty to categorize is its strength, because it can fit so many different situations. It’s bright, light and refreshing, one of those drinks that is interesting enough to keep your attention, but not so loud as to demand it. The classic combination of rum and lime hits first like summertime, and then the complexities of honey and Champagne linger on together in the finish, giving the whole thing a satisfying weight, with a tart finish that keeps you coming back for more.

As the recipe was originally constructed it packed a surprising punch—two ounces of rum combined with a half glass of wine—which also gives us a bit of insight into the name. “It ought to make you fly high,” wrote W.C. Whitfield in his 1941 Here’s How, Mixed Drinks, while modern writers say things like “quite simply, can transport you” and “it’s the quickest way to get from A to B” and all various permutations on the idea that whatever you’re using the Airmail for, you can be sure that it’ll always deliver.

Shake rum, lime and honey syrup together hard on ice for six to 10 seconds. Add sparkling wine, then strain into a tall glass over fresh ice. Garnish with a lime wheel or honestly nothing at all.

Rum: This tastes good with all kinds of rum, but I narrowly prefer aged—the texture from the oak barrel adds some nice complexity to the finish. It was either invented or first popularized by the Bacardi company, though Bacardi isn’t quite what it was in the ’30s: Havana Club is probably a historical gold standard if you can find it, but it’s Cuban so these things can be difficult. Plantation 5 or Don Q 7 or yes, Bacardi 8, would also be great, really any rum with some color from a Spanish speaking country will be good. White rum is good too, for that matter, a little cleaner and brighter but less interesting. In all my tests the only thing I actively disliked was the rich funk from Jamaican rum, which I love in other contexts but just can’t seem to share a stage with sparkling wine.

Honey Syrup: Mix two parts honey to one part warm or hot water, and stir until it’s integrated. Different honeys will have different flavors depending on what those particular bees were sipping on, and feel free to chase that idea down if you like, but for cocktail work I just use commodity honey, usually clover. Also, turning it into a syrup invalidates that magic that keeps honey from ever going bad, so keep your honey syrup in the fridge and it should last a month at least.

Sparkling Wine: just like with the French 75—if you’re using actual Champagne, feel free to serve this up in a flute. As it warms, the cocktail becomes increasingly about the quality of the wine, and for me personally, I think Champagne has the character and complexity to handle that responsibility. When I’m not using expensive bubbles (which is most of the time), I prefer cocktails like this in tall glasses with ice—the character of the overall drink changes as the ice melts, becoming more approachable and refreshing over time, as opposed to less.