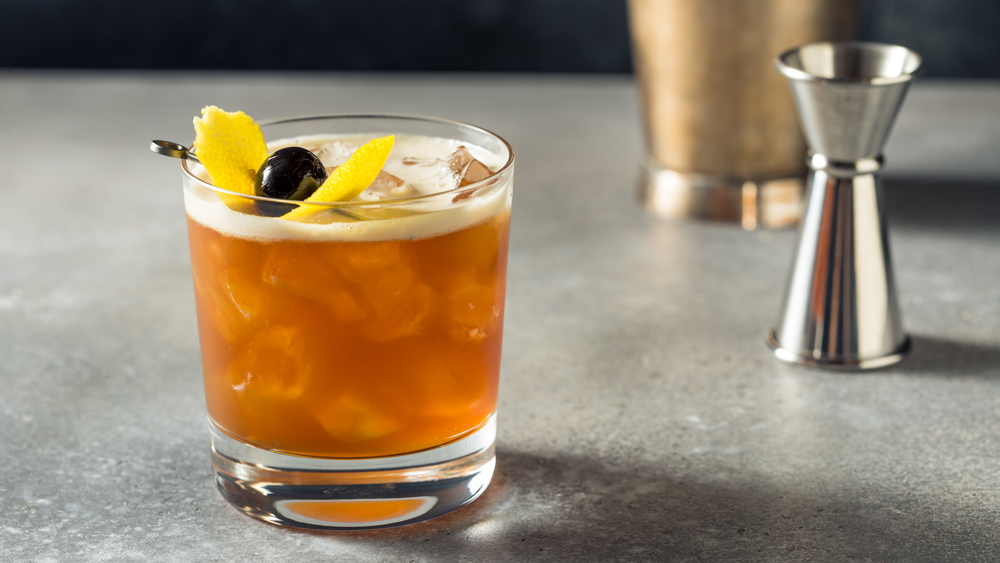 On February 9, 2012, Jeffrey Morgenthaler—one of the country’s most influential and celebrated bartenders—published an article on his blog with the title “I Make the Best Amaretto Sour in the World.”

For context, this is like if Jerry Seinfeld announced that he had figured out the best way to smash a watermelon with a giant hammer. It’s like if Daniel Day Lewis was on Dancing With the Stars, or Thomas Keller came out of the kitchen at The French Laundry and joined you tableside to personally apply Easy Cheese to the top of your hot dog. It was confusing. The Amaretto Sour? Who gives a shit about the Amaretto Sour?

In the Lombardy region of Italy, about 20 miles northwest of Milan, is a smallish city called Saronno, which is famous for making a flourless cookie that they call amaretti. Made since the early 18th century, these little macaron-like sweets are made with egg whites, sugar and apricot pits, the latter of which gives them a bitter almond flavor—“amaretti,” in Italian, means “little bitter ones.” One of the many producers making these cookies was the Lazzaroni family who, in 1851, had the bright idea to combine some of their delicious cookies with alcohol, creating an amaretti-flavored liqueur, which they called “amaretto.”

For over 100 years, Amaretto was just a local phenomenon in this small corner of Italy. It wouldn’t be until 1968 that the brand Disaronno (literally “from Saronno”) was imported to North America, perfectly in time for it to catch the wave of absolute garbage that would come to dominate American cocktails for the next 30 years. You may or may not have heard of the Godfather (scotch and amaretto), invented the same year that the film came out, but everyone knew the Amaretto Sour—the sweet, weak Amaretto Sour, garnished with a day-glo cherry and a headache. They also knew the recipe, because the recipe is the name: Amaretto and sour mix.

So in 2012, when one of our leading lights starts talking about how he makes the best Amaretto Sour in the world, it was understandably puzzling. I mean, you can use fresh lemon juice and adjust for sweetness, but it still lacks a certain panache. But Morgenthaler made two moves that would change this cocktail forever. The first was to add an egg-white, as you would in a Whiskey- or  Pisco Sour, offering a cool texture and a dry finish. The second, the real genius move, was to add “an old friend,” as he wrote at the time, “one that knows Amaretto’s strengths and weaknesses,” and that ingredient was cask-strength bourbon.

It’s difficult to overstate how many favors the addition of high-proof bourbon does for the Amaretto Sour—it’s not a revision so much as it is born again. Bourbon gives the cocktail literally everything it lacks. It punches up the proof, it adds much-welcome complexity, it fills out the body and it offers something to balance the sweetness. It moves it from something sweet and simple to a balanced cocktail enjoyable at any time by anyone. It is—and you really have to hand it to him here—the best Amaretto Sour in the world.

Add all ingredients to a cocktail shaker and shake without ice for five to seven seconds to whip the egg white. Add ice and shake hard for eight to 10 seconds. Strain either over fresh ice in a large rocks glass or up in a coupe. Garnish with a lemon peel and, if you like, a cherry.

Amaretto: Amaretto varies pretty widely, not just in quality but in terms of raw materials—originally, as mentioned, it got its almond flavor from the pits of stone fruits, but some of them get their almond flavor from almonds. If you have an allergy, be wary. As far as brands are concerned, I’ve worked with and heartily recommend both Lazzaroni and Luxardo. I hear great things about Gozio. Disaronno is the most popular and is made more in bulk but it’s still totally acceptable. There are hundreds of brands of amaretto and some are quite bad, so I generally follow the imperfect but mostly functional rule of liqueurs, which is that if the bottle looks awful, the liquid inside probably tastes awful.

Cask-Strength Bourbon: “Cask-strength” refers to the proof at which they age it, which, for normal bourbon, is quite a bit north of what they will end up bottling at. Occasionally, however, they just pull it straight from barrel to bottle without further dilution, and this is cask-strength bourbon (or “barrel strength” which is the same thing). These are products aimed at aficionados, which is great news for us because it means they’re all pretty good—I’m not sure I could name a bad one. Booker’s, from Jim Beam, is the most widely available, and that works brilliantly here, as would the excellent old standby Elijah Craig Barrel Proof or the fantastic new Stellum Bourbon.

Honestly, any bourbon above say 55 percent will be great. If all you have is regular bourbon, it won’t be quite so perfectly balanced but you can still make the drink taste good, just add 1 oz. of it instead of the 0.75 oz., and go from there.

Simple Syrup: You may not need this at all, depending on the proof of your bourbon and your tolerance for acidity. Make simple syrup by combining equal measures of sugar and water and stirring until the sugar dissolves, and scale up or down in this recipe, to taste.

Egg White: Beyond the standard disclaimer at the bottom of your dinner menu, cocktails with raw egg whites are largely safe. If you’re worried about it, use in-shell pasteurized eggs. If you’re really worried about it (or vegan), you can use aquafaba, the liquid that you strain out of a container of chickpeas, which functions almost identically.