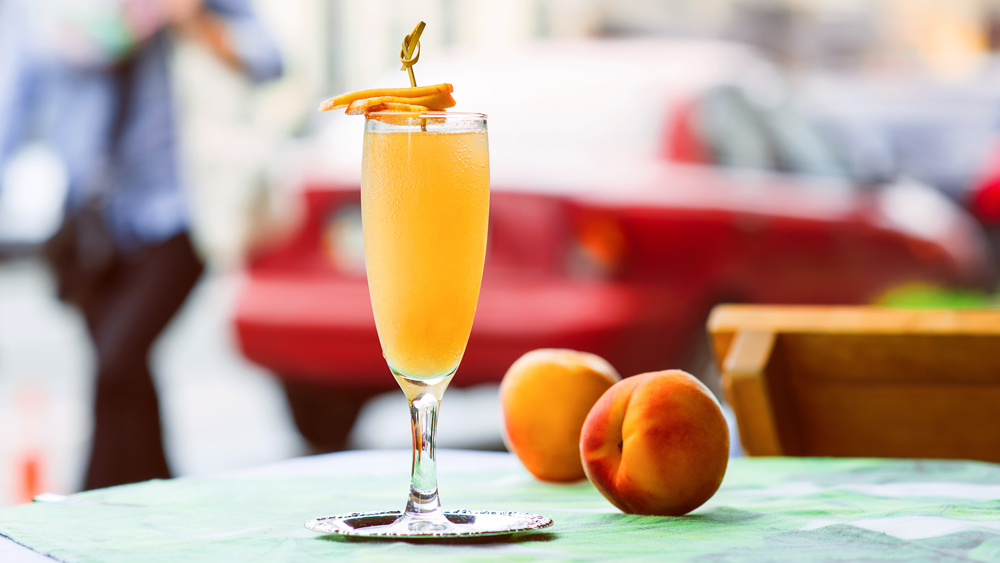 In the cocktail world, we tend to obsess over the origin stories of the classics, but it’s rare that we actually get to experience them. You may know that a drink was invented at a certain bar, but these bars are almost never still around, and when they are, they’ve almost always been turned into some Disney-fied version of themselves, and even if they haven’t, the version they serve is almost never any good. But if you’re ever lucky enough to find yourself in Venice and have that special mixture of historical reverence and financial irreverence, well, then you get to go to Harry’s Bar and drink a Bellini.

Harry’s Bar sits Calle Vallaresso, a block west of the Piazza San Marco at the mouth of the Grand Canal, much as it has since 1931. A small bit has changed since then—they’ve expanded upstairs, and international fame has driven their prices into the ionosphere—but such is, we’re told, the cost of history.

In the 1930s, Venice was a favorite destination of the cream of European society, and Harry’s Bar thrived under the hospitality of owner and barman Giuseppe Cipriani. It also didn’t hurt that its name attracted anglophiles, and was extremely—though they’ll tell you coincidentally—similar to another world-famous bar of the time, Harry’s New York Bar in Paris. But no matter: It had the staying power of quality and was a favorite among rich locals and well-to-do tourists, then of visiting movie stars and other such celebrities. Once Hemingway chose it as his favorite spot in 1949, Harry’s officially became legendary. Which I guess is what makes it ok for them to charge 13 euros for 8 oz. of Coca-Cola.

The Bellini story goes like this: Sometime in the late ‘30s, Cipriani was stuck with a glut of seasonal white peaches and no good way to store them. After what must’ve been a whisper from the muses, he whipped up a puree and added it to some Prosecco, and one of the world’s greatest sparkling wine cocktails was born. His drink, popular though it was, went unnamed for almost a decade. It wasn’t until 1948 when Cipriani christened it the Bellini, in a particularly Italian flourish, after he saw the cocktail’s pink hue echoed in the paintings of the homonymous Renaissance artist (Cipriani also invented the raw beef dish carpaccio, also named for a Renaissance artist). They served them then, as now, in little 6 oz. juice glasses, as a brilliant kiss of pre-dinner summer sweetness.

I’ve alluded to their high prices three times now, and if that seems like overkill to you, all that tells me is that you’ve never picked up a tab there. It is impossible to write about Harry’s Bar and not mention it; so much so, that of the thousands of online reviews, I challenge you to find five in the last 10 years that don’t complain about the eye-watering expense. When I went, in 2012, each small Bellini cost 15 euros, and it’s been 22 euros since 2019 (making it, in fairness, the one thing on Earth that hasn’t gotten more expensive since last year). The overall vibe is similar to meeting someone in an alley and paying a 1200-percent markup on this year’s must-have Christmas toy. It’s hard to know what to say about any of it, aside from that if you can mute the part of your brain that’s allergic to getting swindled, the Bellinis at Harry’s Bar in Venice really are quite good.

Happily, Bellinis are neither difficult nor expensive to make at home, and summertime practically begs for them. White peaches are transcendent experiences in June and July, and a bright, light, slightly sweet sparkling wine cocktail is ever just a couple pours away. And while one school of thought suggests that you must go to Harry’s Bar in Venice and have a Bellini, another, perhaps more convincing school says that Cipriani did the important work of inventing the drink in the 1940s so that now we can enjoy one anywhere. Try it out and see.

To start, make sure your peach puree and Prosecco are fridge-cold and your glasses frozen, if possible. For easiest results, mix ingredients together in a separate shaker or container, and stir to integrate. Once foaming subsides, gently pour into cold juice glasses or flutes, and enjoy.

Prosecco: Use whatever Prosecco you like. The sweet-tart fruit from the peach puree will be the star here, so the brand of sparkling wine is comparatively less important. I do recommend Prosecco, though, as opposed to Cava or Champagne, and not just because it’s traditional—Champagne or Cava have been bottle-conditioned, which gives a bready complexity that’s unnecessary and distracting. Prosecco, with its light, bright fruit and florals, is perfect here.

White Peach Puree: This drink will only be as good as your peaches. There are brands worth mentioning here: I’ve done a lot of work with Perfect Puree, whose white peach puree is excellent. I’ve worked with Funkin’s passionfruit, which is pretty good, and I’d hope for the same from their peach.

Or, it being July, you could just go to the local market and make one. Get white peaches. White nectarines work in a pinch, but they’re not as good. Don’t use yellow peaches—if all you have is yellow peaches, eat them and drink the Prosecco alone.

To make a puree, you’ll need to mash it up, then strain it. Mashing is pretty easy, considering that a ripe peach will bruise if you frown at it. You can use a potato masher or muddler. Harry’s themselves tell you to never use a food processor, because it aerates the fruit—I think this advice is silly, and you should feel free to use one if that’s what you have. It’s possible I’m missing some subtlety here but seeing as it’s going to be strained and mixed with Prosecco, it truly doesn’t seem to matter.

Straining is a little more annoying—you can put it though a cheese cloth, or a sieve, but that’ll take a while. I like milk nut bags because they’re strong, and you can put the blended liquid in there and squeeze it to shorten the straining process dramatically. And while I realize I’m telling you to buy a $15 tool to make this drink, considering that’s about half the price of a single Bellini at Harry’s, I still call it a steal.

Final note: Depending on the ripeness of your peaches and the sweetness of your Prosecco, you may need to adulterate with a touch of simple syrup or lemon juice, but odds are good that the peaches will be fine just the way they are. Try it alone first, then tweak as necessary.

Every week our resident bartender Jason O’Bryan mixes up a new cocktail for you to enjoy. Check out his previous cocktail recipes for more imbibing goodness.