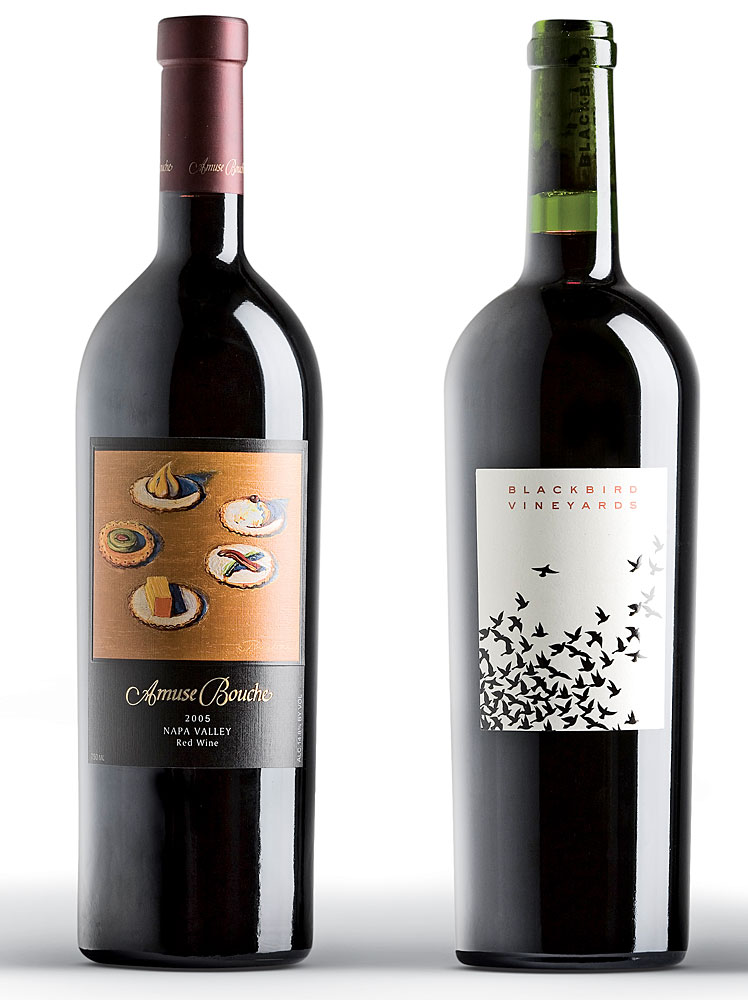 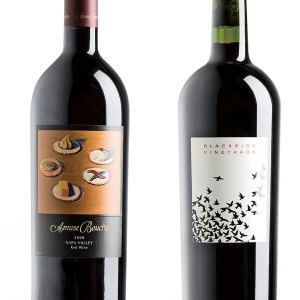 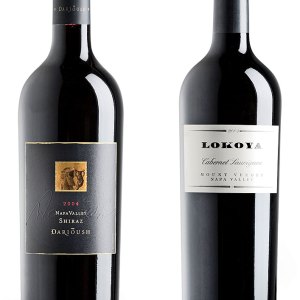 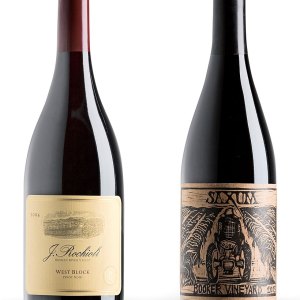 Art, as much as agriculture, furnished the inspiration for Amuse Bouche, a Pomerol-style wine from Napa Valley produced by legendary winemaker Heidi Barrett, formerly of Screaming Eagle. When Barrett and a longtime friend, restaurateur John Schwartz, began to discuss making a wine together, they decided to incorporate their mutual love of fine art into the concept.

Barrett and Schwartz took their cue from Château Mouton Rothschild, which commissions a different label design from a prominent artist for each vintage. However, the partners go a step further by producing a limited?-edition series of lithographs of the original artwork, printed on a 19th-century hand-pulled press; one of these lithographs accompanies each six-bottle case of Amuse Bouche.

Artist Wayne Thiebaud’s creation graces the label of the Amuse Bouche 2005 (www.amusebouchewine.com, $200),itself an artful composition. Sultry red-berry and cocoa scents greet the nose, while on the palate this lusciously textured, Merlot-based blend is awash in rich black cherry, plum, and a medley of earthy, exotic spices.

Although many a Napa Valley winemaker will tout the region as Cabernet Sauvignon country, some of the most extraordinary releases to issue from California’s most renowned wine destination are made from that other Bordeaux grape: Merlot. While some critics have argued that Merlot is too fleshy, too fruity, and lacks the structure and complexity necessary for extended aging in the cellar, others have (rightly) noted that several of the most coveted and long-lived wines of Bordeaux—Château Pétrus and Château Le Pin, for instance—are Merlot-based. Michael Polenske, entrepreneur and proprietor of Blackbird Vineyards, is among these Merlot admirers, and his releases stand among Napa’s most beautifully articulated boutique wines. Located in the Oak Knoll District, near Yountville, Polenske’s vineyard enjoys soil and growing conditions strikingly similar ?to those of Pomerol—a circumstance reflected in the fruit’s quality. What nature renders, virtuoso winemaker Sarah Gott perfects in the Blackbird Vineyards 2005 Proprietary Red Wine (www.blackbirdvineyards.com, $80). Deep black-red in color and velvety in texture, this beauty exudes floral aromas and, on the palate, evokes concentrated flavors of blackberry, black plum, and bittersweet chocolate.

The Darioush winery, as viewed from Napa Valley’s Silverado Trail, suggests what one discovers at once when one tastes the wines: They are like nothing else from the region. The recently completed winery complex resembles a temple of Persian travertine and tinted glass rising up from the valley floor. The building is a fascinating amalgam of ancient motifs and cutting-edge technology—an apt expression, in many respects, of the personality of its owner, Darioush Khaledi, who founded the winery in 1997. Having grown up in the Shiraz region of Iran, where Syrah originated, Khaledi has always harbored a particular passion for this grape, and he brings to his winemaking project a deep sense of tradition, as well as an entrepreneur’s enthusiasm for innovation. The Darioush Signature Shiraz Napa Valley 2004 (www.darioush.com, $64) combines the essence of Shiraz — earthiness and substantial structure—with the ripeness and concentration that characterizes the wines of Napa. Indeed, the perfume of this intense red wine, redolent of plum and wild berries, is almost enough to satisfy on its own; but to merely nose this wine would be to deny oneself the pleasure of its complex, lush flavors and satiny texture.

From the beginning of their careers as vintners, Jess Jackson and his wife, Barbara Banke, understood that great wines are all about place. Having made the momentous decision in the early 1980s to give up their San Francisco law practices to pursue their dream of making wine, the couple searched the length of California for the very best Chardonnay vineyards they could find, and blended the resulting wines to create the award-winning Kendall-Jackson 1982 Vintner’s Reserve Chardonnay. In the course of acquiring and developing properties, Banke and Jackson identified several small mountainside vineyards, whose exceptional and distinctive fruit furnished the inspiration for an exclusive label, Lokoya, which produces only 100-?percent mountain-grown, single-vineyard Napa Valley Cabernet Sauvignons. In the Lokoya 2004 Cabernet Sauvignon Mount Veeder (www.lokoya.com, $200), winemaker Chris Carpenter has crafted one of the vintage’s true treasures: a balanced, luxurious, stunningly textured composition of succulent blackberry, fragrant violets, roasted coffee, and cool, earthy minerality.

While most of the producers in Sonoma’s Russian River Valley came into being during California’s winemaking renaissance of the 1970s and 1980s, Rochioli Winery began its long life during the Great Depression, when Joe Rochioli Sr. purchased acreage that he had been farming as a tenant for some years. His son, Joe Jr., recognized in the soil and climate the potential for producing great wine, and this multigenerational family concern has evolved over time into one of the best producers of Pinot Noir and Chardonnay in a region that boasts some of the finest expressions of these varietals outside of Burgundy’s Côte d’Or. The J. Rochioli 2004 West Block Pinot Noir Russian River Valley (www?.rochioliwinery.com, $78), as its name suggests, comes from the western portion of Rochioli’s Mid 40 vineyard, and is a superbly layered confection of ripe black cherries, creamy vanilla, and boysenberry, with a savory finish of toasted brioche.

It is perhaps fitting that, in a relatively young wine-producing region like Paso Robles, on California’s Central Coast, the preeminent winemaker, Justin Smith, should also be relatively young. Smith and his friend Matt Trevisan established Linne Calodo Cellars in 1997, when they were in their mid-20s, with the then-novel goal of focusing on the production of Rhône varietals. When Smith founded Saxum Vineyards, he continued to concentrate his efforts on the Rhône category using fruit predominantly from the James Berry Vineyard, which he manages and his father owns. His wines, beginning with the 2000 vintage, have set the standard for Paso Robles, which has since emerged as one of the best regions in the state for growing Syrah. The Saxum 2005 Booker Vineyard Paso Robles (www.sax?umvineyards.com, $55)—a sweet-tasting Syrah blended with a touch of feisty Grenache—is a Rhône tour de force: Its dense, unctuous body reminds one of port, as does its 15.9 percent alcohol by volume. The intense, intricate flavor profile, however, balances its magnitude, and the result couldn’t be more fun. A sip of Booker Vineyard is a sensory trip to an old-fashioned soda fountain: Succulent blackberry floods the palate, followed by a shot of espresso, a drizzle of Hershey’s syrup, and a blast of root beer.