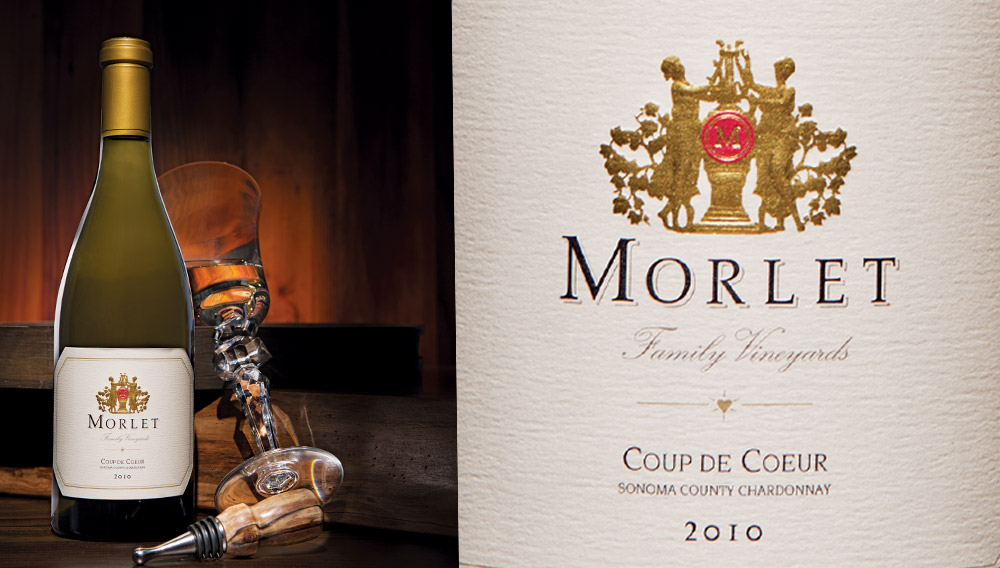 A white wine with heart.

Many wineries in California include the word family on their labels—a descriptor intended to suggest not only that the contents of the bottle are the result of a multigenerational labor of love but also that future generations will heed the call of the vine. In many instances, the families in question have little more to do with the finished product than lending their names to the label, but in the Morlet family, wine seems to run in the veins of every member.

Luc Morlet was raised in his father’s vineyards in Avenay-Val-d’Or, France, where he helped to cultivate the Chardonnay and Pinot Noir used to produce Champagne for Pierre Morlet and Fils, a distinguished boutique house. After obtaining his master’s degree in oenology at Reims University and an MBA from the Burgundy School of Business in Dijon, he held several winemaking positions in Champagne, Bordeaux, and California—this last is where he met Jodie Hauser, whom he married after returning to California in 1996. There he held a series of prestigious positions at wineries in Napa Valley and Sonoma County, including Newton Vineyard, Peter Michael Winery (where his brother, Nicolas, succeeded him as winemaker), and Staglin Family Vineyard. But in 2006, the couple made the momentous decision to strike out on their own; working together in a very hands-on fashion they began to produce small quantities of fine wine under their own name.

Today, the couple—often assisted by their children when school is out—makes a wide range of exquisite wines in their historic winery in St. Helena, which they have lovingly restored. Their offerings include a range of Bordeaux-style blends emphasizing Cabernet Sauvignon, including Mon Chevalier, which comes from Knights Valley in Sonoma, and Morlet Estate, a beautifully structured, almost sculptural 100 percent Cabernet Sauvignon made from Margaux clones grown near the winery. Some might argue, however, that the star among the full-bodied reds is Passionnément (also 100 percent Cabernet), which is blended from the best barrels from the winery’s sources in Oakville, St. Helena, and Knights Valley. The 2009 vintage offers intense aromas of blackberry, blueberry, milk chocolate, and a deliciously rich, velvety combination of candied cherries and espresso on the mid-palate.

Still, our favorite wines in the Morlet portfolio continue to be the ethereally beautiful Chardonnays. Perhaps as a result of his long experience working with this varietal in Champagne and later during his studies in Burgundy, Morlet possesses a special gift for extracting detail from this particular grape. The 2010 Morlet Family Vineyards Chardonnay Coup de Coeur ($125) makes one’s head swim with intoxicating scents of bright lemon, persimmon, loquat, hazelnut, chamomile, and cool, damp minerals. This generosity on the nose is equaled on the palate, where fresh pineapple and apple notes mingle with those of candied lemon zest and Asian pear. This initial sensory deluge, however, eventually recedes, leaving a clean, precise, mineral finish enlivened by razor-sharp acidity. In keeping with its name, this vivid white strikes to the very heart of what makes a Chardonnay truly great.