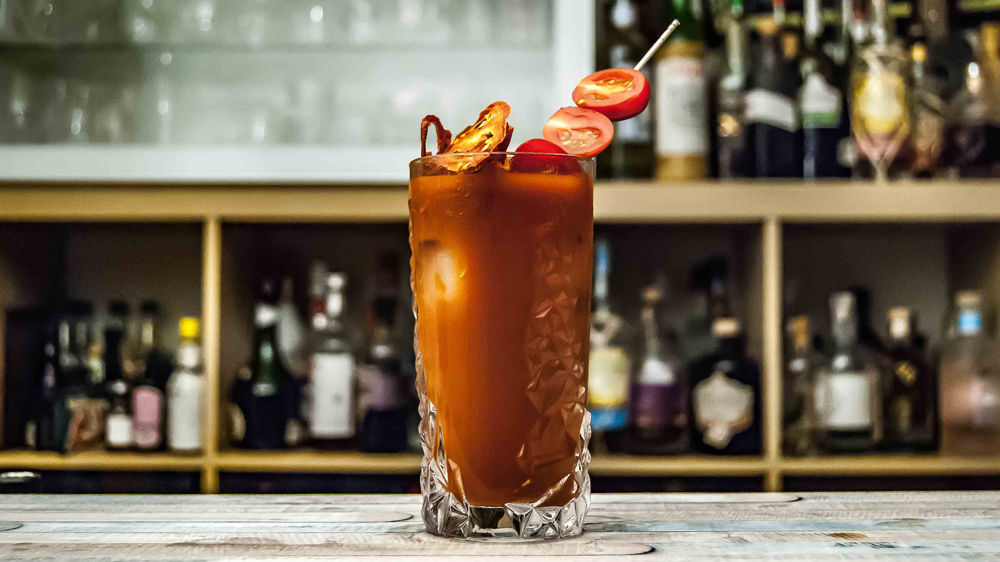 When we’re talking about the Bloody Mary, there’s only one unbreakable rule. A single guiding principle. A Rubicon that shall not be passed. Abide by that axiom and everything else is on the table.

Depending on who you ask, there are between seven and fifteen families of cocktails, groupings of drinks that all resemble each other, but no matter who you ask, everyone agrees that the Bloody Mary is quite alone. Everything about it—what it’s made of, how to make it, when to drink it—is flipped on its head. It’s the duck-billed platypus of mixed drink taxonomy, the sole living example of an entire branch of evolution. To trace its ancestry, you’ll hit oyster shooters before you hit another cocktail.

A roster of the ingredients is like the island of misfit toys: Tomato juice, Worcestershire sauce, fresh horseradish, celery salt… all of these are utterly unique to Bloody Marys. This is why, perhaps, it’s so singular as a morning drink, the quintessential hangover cure, “a classic example,” wrote David Embury in 1951, “of combining in one potion both the poison and the antidote.” You certainly don’t need me to tell you that the Bloody Mary is the undisputed champion of airports and brunch. Absent the vodka, it’s honestly a fairly healthy way to start the day.

This is also why, perhaps, there is such a kaleidoscopic galaxy of recipes. There are no similar cocktails for reference, so you can make it taste however you want—everyone has their own special way to make it, and they’re all different, and they’re (almost) all good. You could take your saltiest dive bar bartender, someone who’d sooner spit at you than make you a Negroni, and I’d bet money that person has some detailed and esoteric recipe for a great Bloody Mary. It is the most durable drink in the cocktail universe, capable of absorbing all kinds of insane shocks, and I’m not just talking about a little too much of this or that—I mean that you can add beer to it, or steak sauce, or shellfish, and you’d barely slow it down.

I’ve had Bloody Marys with mezcal instead of vodka (excellent), I’ve had them with beet & carrot juices instead of tomato (pretty good), I’d had them with smoked soy sauce, barbecue sauce, Guinness, parmesan cheese… they’ve all worked. And while I feel somewhat strongly that there are ideal versions of other cocktails, for Bloody Marys, all anyone can do is offer their personal favorite.

That’s why there’s only one rule and it’s this: Don’t consume them after sunset. Drinking a Bloody Mary at night just feels wrong and confusing, sacrilegious even, which is hilarious because everything else goes. If I were to add, say, barbecue sauce into a Moscow Mule, the only thing I know for sure is that is definitely no longer a Moscow Mule. But I’m 100% sure there’s someone out there who thinks BBQ sauce is the secret ingredient to make “the best” Bloody Mary, and no one in the world has the authority to say otherwise.

Assemble the cocktail with ice in the glass you’ll drink it in, and then roll it back and forth between that and another glass, mixing the ingredients without breathing too much air into the tomato juice. Do that five or six times and then garnish with a celery stalk, and perhaps something ostentatious like a poached shrimp or a cheeseburger, and enjoy.

Alcohol: As always, when mixed with almost anything (let alone something so intense as all this) it doesn’t matter what kind of vodka you use as long as you get something that’s not horrible. I go Smirnoff, Reyka, Svedka or the like. In general I’m against spending more than $20 on a bottle of vodka, but live your life.

As for variations, gin makes a Red Snapper, which some people love but for me, this one of the very few applications where I think gin makes a worse drink than vodka. Tequila is a natural choice, as is mezcal—the savoriness here lends itself beautifully to smoke. Another good choice is St. George’s Green Chile Vodka, which is distilled with whole sweet and hot peppers and cilantro, and is practically made for this application.

Tomato Base: Personally, I like good-old tomato juice here. V8 has more vegetable juices and makes a milder base that tastes great at first, but as the ice begins to melt, you begin to appreciate the intensity of Tomato juice. Another popular choice is Clamato, a tomato juice “cocktail” with clam broth added in, and as mentioned, the Bloody Mary handles it admirably, but there’s a slight sweetness and hollowness to the flavor that leads me back to classic tomato.

Acidity: Tomatoes have a bunch of acidity, but you still need a little more. I use lemon, but obviously lime works, as do fun twists like sherry vinegar or apple cider vinegar for you vinaigrette fans. In a perfect world I’d take the 0.5 oz. extra acidity and do half sherry vinegar and half lemon juice, but I acknowledge that’s a little much for an already involved cocktail.

Savory: You have to get umami in there to make it its best self. The most common and cleanest way is to use Worcestershire Sauce, but there’s lots of ways. You could use a little soy sauce (just a touch, it’s pretty intense), A1 for a barbecue savoriness, fish sauce, MSG (again, small amounts) whatever.

Hot Sauce: Obviously, only use this if you like heat. Use your favorite brand, they’ll all be good, but for this application, I love the garlic depth of Sriracha. Apply to taste. One good squeeze is enough for me. You don’t want it to be punishingly hot, unless of course you do.

Horseradish: Some recipes omit this in the belief the hot sauce does the job, but I think that’s a mistake. The heat of horseradish hits different, for one, and for another I love the flavor that horseradish brings. It deepens the base flavor and wakes me up.

Spices: Unless you’re juicing your own tomatoes, which I don’t recommend, the tomato juice will have some salt already added, but I like a touch more anyway. Black pepper is just for fun, not strictly necessary, but I like it for the same reason I like the horseradish. The only thing I insist on is celery salt, the flavor of which shades in the tomato and makes the vegetal quality of the cocktail a little more 3D.