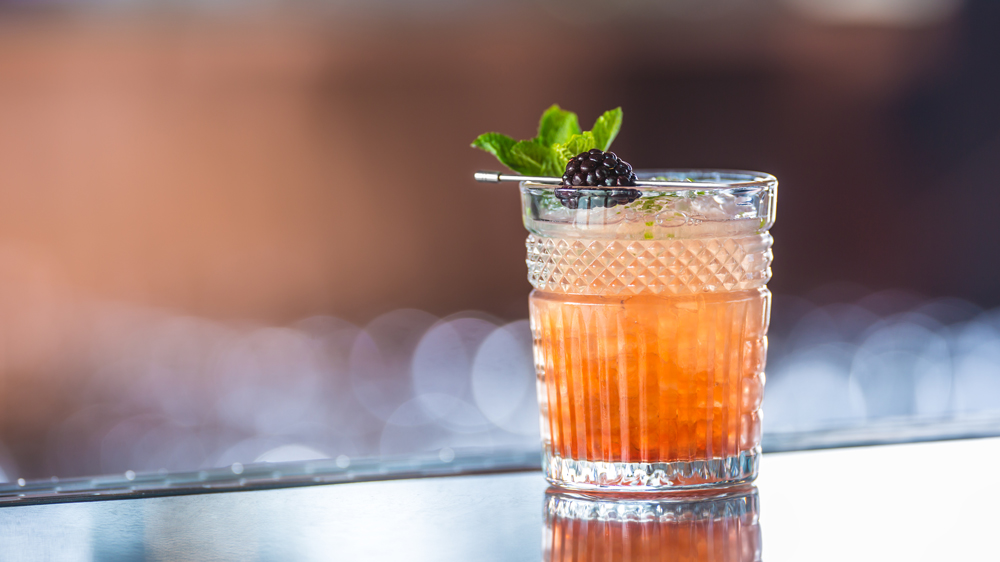 A cocktail’s story—where it came from, how it was first made—is almost never easy to pin down.

Sometimes, as with the Sazerac, it’s a murky swamp of details, ingredients popping in and out of the early recipes with no clear genealogy, all available evidence merely pointing toward a city (New Orleans) and a decade (1890s) and fairly hopeless beyond that. Other times, as with the Mai Tai, there are two or more origin stories, and their disagreement can get somewhat contentious (“I originated the Mai Tai,” wrote Vic Bergeron, clearly still upset some decades later, “anyone who says I didn’t create this drink is a dirty stinker”). But then sometimes it’s not hard at all, because sometimes the classic is from the 1980s, and you know how it was first made because there’s a video of the guy who made it describing it in great detail on YouTube.

Such it is with the Bramble. There’s no mystery to unravel, no microfiche to page through. It was, like the Espresso Martini, invented by legendary British bartender Dick Bradsell, one of the few who kept the torches lit in those dark decades of sour mix and peach schnapps, vodka-everything and drink names designed to make adolescent boys giggle (Sex on the Beach, et al). He invented it at Fred’s Club, in London in 1984. It’s made from gin, lemon juice, simple syrup and crème de mûre (blackberry liqueur), and the original concept, he explained at length, was to make a distinctly English cocktail, “inspired by the fresh blackberries I used to get on the Isle of Wight.”

As one of the earliest pioneers of our little cocktail renaissance, Bradsell did as much as anyone to decode the mixological secrets of the past. He must’ve certainly had his share of historical dead ends and origin story contradictions, which perhaps explains why, in his breakdown of the Bramble, he was almost comically thorough. He used Plymouth Gin. He talked about what kind of crème de mûre he used (Cave de Bissey), and some common variations if you can’t find it. He explained where the name came from (“a Bramble, by the way, is the bush that blackberries grow on”). He even held court about the ice: “Incidentally,” he wrote, “I’d like to take this opportunity to shut down all debate over whether the Bramble was made with crushed ice or cracked ice. It was made with crushed ice because that was what the machine made.” So it was. Question answered.

So why write about the Bramble at all? Because it’s amazing, that’s why, and as the days get longer and the sun gains strength, cocktails like the Bramble float back into our minds, as if compelled by the season. It is a cocktail of winter moving toward Spring, the plush and complex sweetness of the blackberry liqueur filling out and softening the gin’s crystalline chill, with the crushed ice stretching it all out for maximum refreshment.

Dick Bradsell passed away five years ago now, but he knew his cocktail had already become a classic. It’s not hard to see why, either—it is easy to make, easy to remember, and easy to adapt to different palates and circumstances while not losing an ounce of its inherent quality. It’s great as it is, but it’s also great with raspberry liqueur, or cassis liqueur, or fresh blackberries. It also probably doesn’t hurt that he left a robust set of instructions for future would-be cocktail archeologists, a kind of primary text, to make sure that the variations would never drift too far from the Bramble’s English roots. “Those of you who insist on making this drink wrong with vodka,” he made sure to note, “should think up your own bloody name for it.”

Add gin, lemon juice, and simple syrup to a shaker with a handful of crushed ice. Shake briefly to aerate and incorporate the ingredients, then dump contents into a rocks glass. Top with more crushed ice, then drizzle the crème de mûre on top. Garnish with a lemon slice and a blackberry.

Gin: Bradsell used Plymouth Gin—still juniper forward, but softer, a little fuller, and lower proof—and there’s certainly no reason not to agree. Honestly, aside from maybe some of truly crazy newer styles, I can’t think of a gin that wouldn’t work here. This is a template as much as a recipe, and it’s practically built to accommodate the spectrum of gin. Use whatever you’ve got.

Lemon Juice: fresh, as always. Now, Bradsell’s recipe would’ve called for 1 oz. of lemon juice at least, which I personally think is too much. I tend to prefer letting the base spirit speak a bit more, but as he was fairly explicit in its instructions, it’s worth mentioning that he used both more sweetness and more citrus, which has the effect of maintaining sweet-tart balance while deemphasizing the role of the gin. However you do it, make sure the final addition of the liqueur doesn’t tip the balance into too much sweetness. “That’s the art of The Bramble,” he wrote, “to include enough lemon to balance the mûre.”

Simple Syrup: Equal parts sugar and water, and stir until the sugar is dissolved. You can use hot water if you want to, but even room temperature water will dissolve the sugar within five minutes.

Crème de Mûre: I admit I haven’t tried as many types of crème de mûre as perhaps I would like, but I’ll say that I haven’t had a bad one. Combier, Giffard, Briottet, Massanez and Lejay are all high-quality producers and all make a crème de mûre: If you see one, pick it up, it’s unlikely that you’d have two options. However, as mentioned, this is as much a template as a recipe. It works with raspberry liqueur like Chambord, it works with peach liqueur, it works with apple liqueur (I like to add a dash of absinthe if using apple), it just works.

The variation you’re mostly likely to encounter, however, is the fresh version, which is to say just muddling two fresh blackberries in the bottom of the shaker tin. This makes an excellent Bramble, just don’t forget to bump up the simple syrup to 0.75 oz. to compensate for the absence of the liqueur’s sweetness.