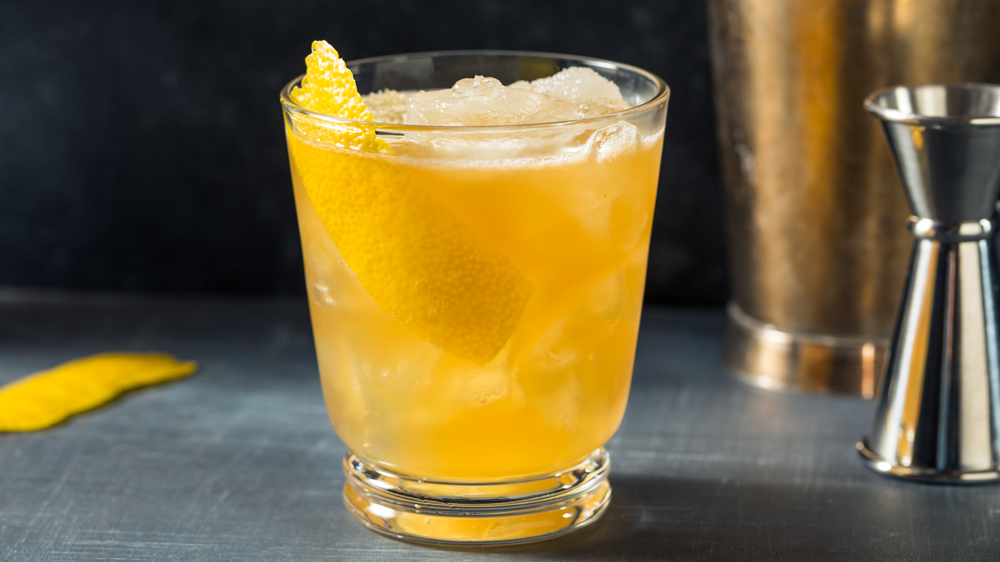 Picture yourself in the yard grilling meat, the direct sun still uncomfortable in the late afternoon, on one of those days when you wonder if it’s an acceptable hour to start drinking and then decide you don’t care either way. And if you’re anything like me, you are often met with a set of conflicting instincts: It’s too hot for whiskey, but you kinda want whiskey. The temperature forbids sweetness, but you want it refreshing and summery. You don’t want a glass of juice, but you’d love the overall effect to be juicy. It’s like a riddle. What to do?

We humbly submit, by way of answer, the Cardboard Plane. This space is usually reserved for classics new and old, and plenty of those would work here—the Whiskey Smash, the Kentucky Buck, the New York Sour and on and on—but this original cocktail, invented at San Diego cocktail bar The Lion’s Share a few summers ago, is one of my favorites I’ve ever made. This drink is essentially what happens when you start with a vibe, and work backward: We wanted to make the juiciest cocktail we possibly could and set out to see how far bourbon’s natural affinity for orange and grapefruit could get us there.

Being “juicy” in this case isn’t just a function of adding juice, which can be sweet and flabby and lack precision, but instead leaning into the inherent character of a couple of our favorite liqueurs. To start, we grabbed Cointreau—the classic French triple-sec, easily one of the best orange liqueurs ever made—and deployed it here in significant quantity, which gives the drink the irrepressible fresh juiciness we sought. Matching that is Amaro Meletti, among the most floral of the Italian amari, with a perfumed and grapefruit-like bitterness and a juicy quality all its own. Match these with a relatively mild bourbon, for oak and structure, lemon to balance the sweetness and a touch of grapefruit, and you have a summer cocktail that’s a essentially a liquid love letter to citrus fruit, like a tart, whiskey-flavored Starburst.

As for the name—once the recipe was complete we immediately recognized it as a child of Sam Ross’s incredible Paper Plane. It’s fresher than its predecessor, with more citrus where the other would have herbal complexity, but with a similar textured bitterness and tart finish. At five ingredients it’s also a bit clunkier than the Paper Plane, so we named it the Cardboard Plane, as an expression of the sincerest form of flattery. And while a cardboard airplane wouldn’t fly for very long, we suspect it’s good enough for a few laps around the backyard. Enjoy a few this holiday weekend, if you feel so compelled.

Add all ingredients to a cocktail tin and shake hard on ice. Strain into a rocks glass over fresh ice and garnish with a grapefruit peel.

Bourbon: Despite how refreshing this cocktail is, it still packs a punch—Cointreau is 40 percent alcohol and Amaro Meletti is 32, so this drink works best with a milder bourbon, something close to 80 proof. Four Roses Yellow Label would be amazing, Evan Williams, Jim Beam, Ancient Age or Benchmark would all work. The bourbon here provides the oaky backbone but isn’t really the star, so as long as you keep it under 90 proof I wouldn’t worry too much about it.

Cointreau: My vote for the best orange liqueur around. The only other one I’d only consider using here is Combier, which I haven’t tried in this application but is also very good. Keep to one of those two, though. While the quality of your triple-sec is always important (a drink is only as good as its weakest link), it’s especially so here.

Amaro Meletti: Meletti has, as mentioned, the juicy profile you’re really looking for, in addition to being the perfect mix of floral and bitter. Other amari work better or worse, depending on the bottling. If you can’t find Meletti, I’d recommend the amaro from CioCiaro, Montenegro, or Nonino—it won’t be perfect, but any of them will yield a totally delicious cocktail.