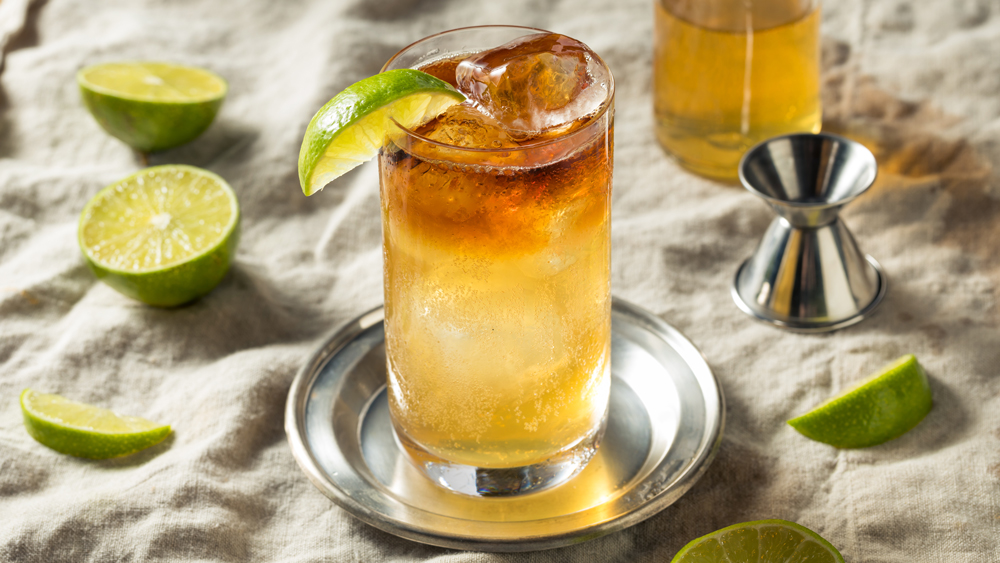 There’s a conversation that almost every bartender has at the beginning of their career:

There are a few entries in the world of mixed drinks that aren’t cocktails so much as code names. While an Old Fashioned has specific ingredients in specific measures with a specific way to prepare it, a rum and coke is just a rum and coke, whether you call it a “Cuba Libre” or not. Same with a Screwdriver (vodka and OJ) and a Cape Codder (vodka and cranberry)—there’s no recipe. How much vodka? However much you want. How much cranberry? Literally no one cares.

But there’s something about the Dark ‘n Stormy that persistently elevates it above its would-be two-ingredient peers. Something about the spice of a good ginger beer that makes it feel more adult than Coca-Cola or orange juice. And then there’s the trick of pouring the lime and ginger beer first and then layering the black rum on top to look like, as the lore goes, “the color of a cloud only a fool or a dead man would sail under.” And there’s also this to consider: As far as flavors go, the Dark ‘n Stormy is really, really good.

It’s a truism about Bermuda that things tend to get lost there. One of those things was James Gosling, an Englishman who, in 1806, was aiming to sail to America but got waylaid on Bermuda, found it suited him and decided to stay. In 1860 the Gosling company started selling rum—they don’t distill, but source from other places, then blend, age and bottle themselves—which started being referred to as “black seal,” for the black wax they’d use to seal the bottles. Meanwhile, on the other end of the island, the British Royal Navy was bottling their own ginger beer, presumably to help any more novice sailors with sea-sickness. Bermuda isn’t a particularly big place; it didn’t take long for someone to mix the two together, name it after that threatening cloud business and the Dark ‘n Stormy was born.

In an otherwise dynamic field, the cocktail has remained conspicuously resistant to change. Part of this is thanks to the litigious nature of Gosling’s themselves (more on that below), but part is that it doesn’t really need it. It’s essentially a Moscow Mule with the neutral vodka swapped with the broad depth of dark rum—a dash of bitters may improve it for some palates, but it’s not really necessary. A bit of lime juice is nice if your ginger beer is a touch sweet, but it’s also nice without. It’s great made with fresh ginger syrup and soda water, but it’s also great if it’s just rum and ginger beer. It can be just two ingredients, but it’s also a Dark ‘n Stormy.

Add lime and ginger beer to a tall glass with ice, until the liquid reaches about 1.5 inches short of the top of the glass. Gently pour the rum over to layer it on top and garnish with a lime wheel or wedge.

Rum: There’s a lot of admirable things about Gosling’s rum—its family run for eight generations, and they’ve always been pretty forthright that they don’t distill themselves. What’s kind of annoying about them is that they’ve held a trademark on the term Dark ‘n Stormy since the ’80s and “vigorously” pursue any other rum company that tries to use it, even in 2012 even threatening legal action against a blogger who had the temerity to wonder what the best rum for a Dark ‘n Stormy would be. This is fairly obnoxious behavior, and it makes me want to say that their rum is bad, but it’s not really. A Dark ‘n Stormy made with Gosling’s Black Seal Rum is not only the only legal way to make it, but it also tastes pretty good.

If, hypothetically, you were trying to make a cocktail that definitely wasn’t a Dark ‘n Stormy, but had a different rum and ginger beer, you could go really any way you wanted with the rum and it would be good. You want weight and depth—as long as the rum has some age, it’ll be delicious. Personally, when I’m mixing rum with ginger beer for a cocktail that is definitely not a Dark ‘n Stormy, I reach for the heavier Guyanese or funkier Jamaican rum, but again, any aged will taste good.

Ginger Beer: This falls to personal taste. I think a good ginger beer needs to be spicy—the spicier, the better—but the Moscow Mule craze of the 2010s means that there’s lots of good brands now. I’m a big fan of the spice of Cock ‘n Bull or Blenheim Ginger Ale, or the rounder profile of Bundaberg, but there are lots more that work great.

If you really want to up the spice quotient, you can follow our Moscow Mule advice and make our own ginger syrup. It’s a minor pain in the ass, admittedly, but for true ginger fiends (you know who you are), there’s no substitute.