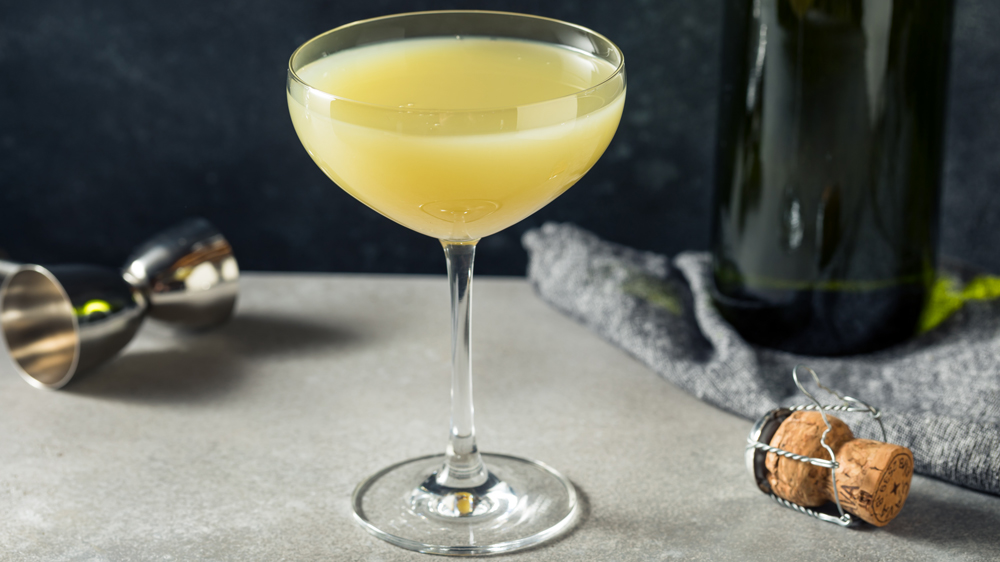 Here’s some solid life advice: Don’t get into a sword-fight with Zorro, don’t get in a gun-fight with John Wick and if Ernest Hemingway offers you a drink that he fixed himself, pass.

In 1932, at the age of 33, Hemingway took a short break from fiction to write a treatise on mortality and courage and the traditions of Spanish bullfighting called Death in the Afternoon. He was already, at that point, one of America’s most celebrated living authors, having written both The Sun Also Rises and A Farewell to Arms in his 20s. He was also becoming something of a celebrity, not just for his objectively fascinating life but for his ceaseless and spectacular capacity for drink and was therefore the natural choice when a couple mischievous literary types started asking famous authors for cocktail recipes, which the literary types aimed to string into an amusing little drinks book.

Their book, So Red the Nose, or Breath in the Afternoon, was published in 1935. It contains thirty cocktails from thirty authors, each named for one of the respective author’s works, and each attended by an impudent, often lascivious caricature. The name itself is a drunken pun on So Red the Rose, a somber Civil War novel written the year before. It was, in other words, a big joke.

How deeply that joke was intended to go is an open question, which brings us to Ernest Hemingway’s recipe, which is right up front on page one: “Pour 1 jigger of absinthe into a Champagne glass,” he begins. Just as an editorial note, that’s two full ounces of absinthe, a flamboyantly high proof spirit thought at the time to be hallucinogenic and/or mentally deranging, and which in 1935 had been illegal across most of the world for 20 years (but was still made in Spain, which is where he came across it). To this, Hemingway continues: “Add iced Champagne until it attains the proper opalescent milkiness. Drink three to five of these slowly.” The cocktail’s name, aptly chosen: Death in the Afternoon.

It’s difficult to know what to do here. As far as cocktail recipes go, that’s pretty straightforward. On the other hand, this still seems like a joke, doesn’t it? Absinthe, even for the destitute and degenerate in the late 1800s, was always taken with water. Always. Hemingway’s “cocktail” here is to substitute water with Champagne, a concept I’m usually for, but adding alcohol to a double-shot of absinthe is like strapping a grenade onto a bomb. Was his problem with absinthe that it was insufficiently strong? And then what’s this instruction to “drink three to five?” Really?

Whether it’s a joke or not, Hemingway’s proportions, as with his namesake Daiquiri, are flatly unacceptable. The drink, however, is not without promise, once you’ve brought it back in from outer space. Hemingway prescribes absinthe with a bit of Champagne, but when you flip those ratios—Champagne with a bit of absinthe—the cocktail can come into its own. Absinthe, when used in human quantities, is a spice, tingling through the mid-palate and then rising to offer bright green herbaceousness and a black licorice finish. Put together with sparkling wine, it is a round and satisfying drink, a fantastic way to punch-up some Prosecco you may not be in love with, and a way to commune with a long-dead famous author, no matter how tame a version he would’ve found it.

Death in the Afternoon

Combine ingredients in a coupe or Champagne glass. Garnish with a lemon peel or nothing at all.

Sparkling Wine: Hemingway specifically called for Champagne, not Prosecco, and likely would’ve insisted on it. Hemingway loved Champagne. That being said, we feel strongly that it is Champagne’s brighter, fruitier cousin Prosecco that really makes this drink shine. Anything that goes through a secondary fermentation in the bottle, like Champagne or Cava, will have bready, yeasty complexity on the finish. This is usually desirable—try a French 75 with real Champagne to see how good that drink can be—but it directly clashes with the absinthe. Across our tests and all types of absinthe, Prosecco was the winner.

Absinthe: All absinthe will work, but if I had my pick, it would be the delicate blue La Clandestine, from Switzerland, which gives a soft floral fennel & anise note and doesn’t chase away the charms of the wine itself. Also great is Kubler, which will offer a similar touch but a little deeper and more resounding, with a slight earthiness that I don’t dislike here, but I like less than La Clandestine. But honestly, whatever absinthe you’ve got, that would work well here.

Other ingredients: Depending on the sweetness of your Prosecco you might want a tiny bit of simple syrup, but it would be a tiny bit, a half teaspoon or so, just to make the whole thing a bit friendlier. If after a few sips you find the tartness on the finish a bit abrasive, that bit of sugar will help.