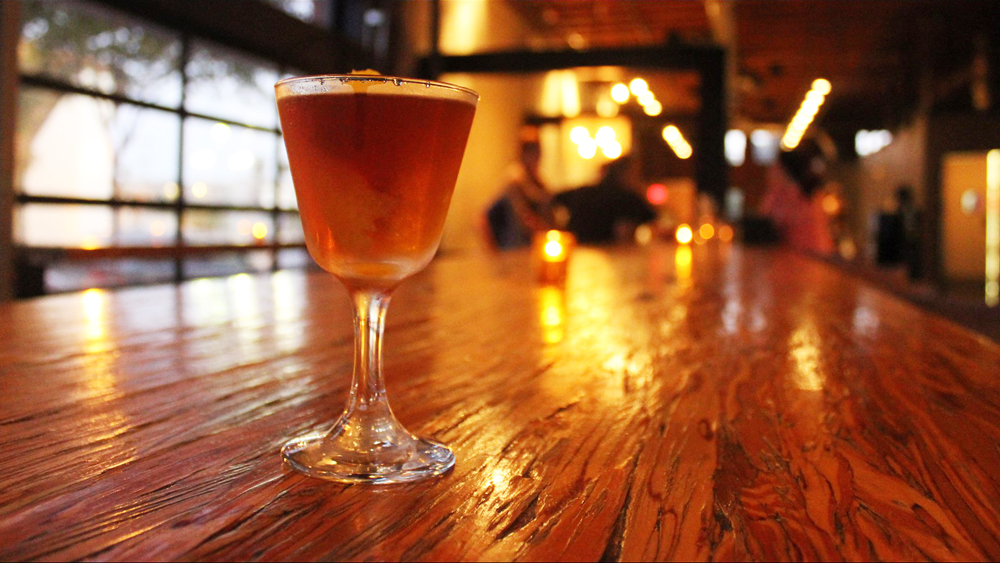 In the early evening of June 1, 1813, as he lay dying, Captain James Lawrence could tell by the shouts above deck that the British had boarded his ship. The USS Chesapeake was battered and outmaneuvered but Lawrence was a military man and he gave what would be his stoic final order: “Don’t give up the ship. Fight her till she sinks.”

This command was universally seen as an act of valor. One could point out that a suicide pact is quite a bit more appealing when you yourself are already bleeding to death, but I suppose that would be missing the point. The Chesapeake was, in fact, given up, within the hour even, but that, too, isn’t the point. The point is that “Don’t Give Up the Ship!” became the rallying cry for the fledgling U.S. Navy during the War of 1812.

Now—what any of that has to do with gin, Fernet Branca, orange liqueur and Dubonnet is really anyone’s guess. To the extent that there ever was an answer to that question, it seems to have been lost to history. As best we can tell, a cocktail by this name shows up about 130 years after Lawrence’s fateful encounter, in the 1945 printing of Crosby Gaige’s Cocktail Guide and Ladies’ Companion (it is curiously, almost plagiaristically similar to the Napoleon Cocktail in the Savoy Cocktail Book published in 1930, but with a new name and no mention of its pedigree). In any event, no one seemed to care, and it languished in cocktail purgatory until sometime around 2004, when it was unearthed and reanimated, like so many other great cocktails, at Seattle’s Zig Zag Cafe.

It’s a little surprising that it didn’t make more of a splash back in the ’40s. The war had just ended and perhaps it was the wrong time to talk about applications for Italian liqueurs, or perhaps tastes were already drying out and people just didn’t talk about cocktails like they used to. Whatever the reason, just like the eponymous command, the Don’t Give Up the Ship is a drink worth remembering, a stirred gin cocktail that’s good for all seasons. Fernet Branca is such a problem child that getting it to play nice is a treasure in itself and the flavors layer perfectly—it hits clean, deep and bright, with the gin providing broad-shouldered structure, the vermouth and orange liqueur a light and somewhat juicy sweetness, and the Fernet sparkling like a firecracker on the finish. It’s refined but robust, a serious drink, to be deployed as liquid courage, or whenever serious drinks are called for. Like, for example, if the British had just boarded your ship. Try one on a mild late-summer evening, perhaps after dinner, and fight her till she sinks.

Don’t Give Up the Ship

Add all ingredients to a mixing glass and stir on ice for 15 to 20 seconds. Strain off the ice into a footed coupe or cocktail glass and garnish with an orange peel.

Gin: Stay classic here. I know how you love your New Western-style gin that’s distilled with seaweed or whatever, and make it with that if you want—I’m not saying it won’t be good—but in all my tests this cocktail is best with a big, robust, juniper-forward, London Dry Style gins. Tanqueray, Beefeater, Bombay Dry, that kind of thing.

Fernet Branca: Accept no substitutes. Actually, you can accept substitutes if you want, but I can’t vouch that they’ll work here. Fernet Branca isn’t all that well known as is, and among those who do know it, fewer still know that Fernet Branca is just one of dozens of different Fernets: Fernet is the subcategory of Italian bitter liqueurs (Amari) that is marked by huge bitterness, saffron, and a dry menthol-peppermint finish. The one made by the Branca family is the first and is far and away the most popular, but feel free to try it with whichever Fernet you like. I promise you at minimum, the results will be interesting.

Cointreau: Here’s where I stray from orthodoxy. Most recipes—indeed the original recipe—call for Orange Curacao (brandy based) as opposed to Triple Sec/Cointreau (vodka-based). I strongly prefer using Cointreau here—the crisp sweetness, the juicy profile, and the overall clean lines of the spirit seem, like a great bartender, to be there when you want them and gone when you don’t. Brandy-based orange liqueurs like Grand Marnier are plenty delicious and great for other applications, and they’re good here too honestly, but it makes a significantly different drink. More on that below.

Sweet Vermouth: here’s the best moment to point out that there are two versions of this drink. The original, the one you’d get at the Zig Zag Cafe, is slightly different in proportions and ingredients to the one I’ve given you above. In addition to using orange curacao, the original uses not sweet vermouth but Dubonnet, the aperitif wine from France. Superficially they’re similar—both are wine based, both bittered with herbs, but in practice, they hit differently, the Dubonnet more raisinated and brightly fruited, while sweet vermouth—especially Carpano Antica, as I’d recommend—is full of plummy vanilla intensity.

What we have here are two cocktails, similar but very different. The original—original ratios calling for a little less Fernet and liqueur, with Dubonnet and orange curacao—makes a delicious cocktail, a lower-toned winter drink, the vanilla and oak of the curacao’s brandy defining the structure. It’s deeper and more meditative. The other version, however, is the one I first encountered—above ratios, with sweet vermouth and Cointreau—and is my favorite, the flavors brighter and cleaner, less lingering and therefore better for all times of year. Resist the urge to mix and match, but either recipe, made to its specifications, will treat you well.