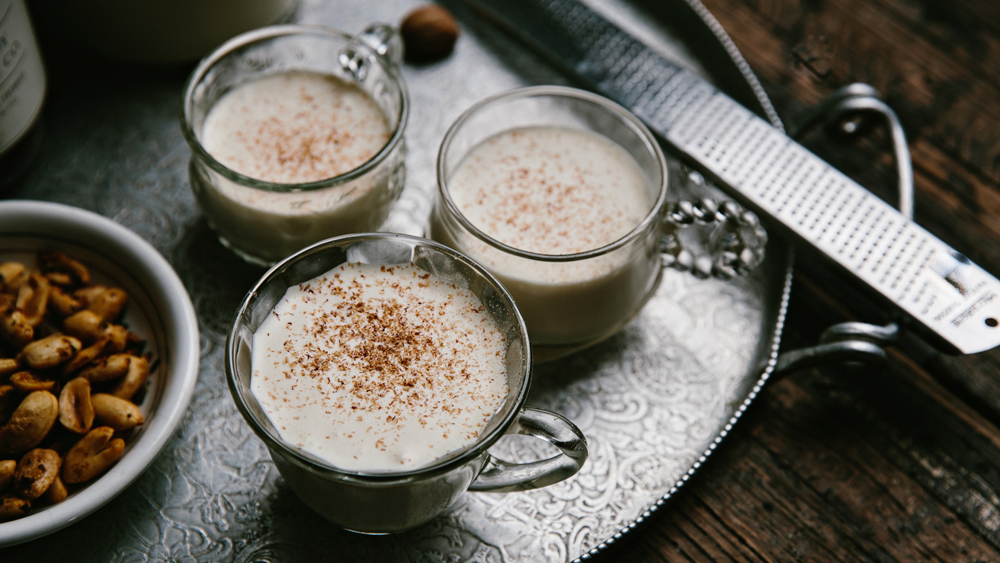 Some cocktails are a harder sell than others. Negronis, for example, have a bitterness that isn’t for everyone. The word “tequila” can and often does viscerally conjure up horror stories from a person’s late teens, sometimes decades past. And there’s a terrific cocktail somewhat regrettably called “Growing Old and Dying Happy Is a Hope, Not an Inevitability.” That moniker makes it a tough sell to the uninitiated. But out of all the delicious things that I can make with alcohol, I think the hardest one to convince people to try—and the one about which doubters are most wrong—is Eggnog.

It’s not like I don’t know why. The raw eggs, the sweetness, the word “nog,” I mean, I get it. Unless you’re plugged into the cocktail world, Eggnog has a number of cultural associations, all of them bad. Like Cousin Eddie chugging it out of a mug shaped like a moose’s head. Who wants to be like him? But I’ll say this: If you are one of those people who believes they do not like Eggnog, I would guess—no, I would bet—that you’ve only ever tried the premade garbage in cartons that occupy the dairy section of supermarkets from Thanksgiving to New Year’s, and therefore have never actually had Eggnog. Eggnog is, in fact, intrinsically delicious, and you would like it, and while I try to avoid appeals from authority, on the question of Eggnog, I’m afraid you’re just going to have to trust me.

Eggnog is an aged spirit mixed with eggs, cream, sugar and spices. Do you like ice cream? Great, you’ll like Eggnog. Honestly the only substantial difference between rum ice cream and Eggnog is that the Eggnog has too much alcohol to freeze. It’s liquid dessert. It’s the physical manifestation of treating yourself to, ounce-for-ounce, one of the most outrageously delicious things you can drink. It’s the kind of double-barrel decadence that, one month from now when your New Year’s resolutions have you mainlining adaptogens and doing YouTube yoga, you can look back with a satisfied smile, knowing that you made the most of your Holidays.

Now, you may be freaked out about the raw eggs. However, in this country they’re very safe, and your mother’s “don’t eat the cookie dough” fussing is largely an artifact of a few bad outbreaks in the ’80s and early ’90s. The CDC back then estimated that 1 in 20,000 eggs contained salmonella (for reference, the odds you’ll get struck by lightning at some point in your life is 1 in 15,300), and those numbers have probably shrunk even further since then. That being said, if you’re immunocompromised, you should buy pasteurized in-shell eggs. If you’re not immunocompromised but just nervous about it, you can buy pasteurized eggs, or you can age the eggnog for three weeks.

Age the Eggnog!? Yes, age the Eggnog. Don’t take my word for it—people have been writing ecstatically about aging eggnog since George Washington was in short pants. Before refrigeration, alcohol was the solution to food-borne illnesses; build it strong enough, and the alcohol will pasteurize it all on its own. And almost like an accidental bonus, three-week Eggnog actually tastes even better than fresh, the flavors mellower and more integrated. The bacteria-killing process starts working right away, but won’t completely pasteurize for a couple weeks, three to be safe. And there’s no limit to how long it can age. “Store in the fridge,” writes Alton Brown, “for a minimum of two weeks. A month would be better, and two better still. In fact, there’s nothing that says you couldn’t age it a year, but I’ve just never been able to wait that long.”

I’ll just note that I find the sight of it irresistible every time I open the fridge, and I’ve usually consumed it all well before the three-week mark. Then again, I also make Pisco Sours and Whiskey Sours with raw egg whites all the time. I can’t speak for anyone else, but personally, I find some things to be worth the risk.

Separate the eggs, and keep the whites to use somewhere else—like a merengue or your Whiskey Sour. Using an immersion blender or mixer, beat the yolks with the sugar in a large mixing bowl until the mixture lightens in color. Add dairy to a large bowl, then add the liquor and salt, then slowly beat in the egg mixture. Pour into glass jar or bottle and store in the fridge indefinitely. To serve, pour about 5 oz. into a small glass, and garnish with some freshly grated nutmeg.

Spirits (aged rum, cognac, bourbon): The three are in tandem here because without the spirits, this is just eggs, sugar and cream, so it needs complexity wherever it can get it. If you can’t get all three or just don’t want to, don’t worry about it. It tastes great with just rum and cognac, or even just cognac.

As for which bottles, it’s really not particular. If you have booze lying around, use it. But if you’re buying bottles for this—for rum, do full bodied and aged: Appleton Estates Signature Blend, El Dorado 5 or 8 year, or Mt. Gay Black Black Barrel work well, as do others. For cognac, a VS or VSOP, no need to use the expensive stuff here, and for bourbon, literally anything that says “straight bourbon” on the label is fine.

Quantity of spirits here make up 28 percent of the volume of this drink, and assuming they’re 80 proof, the final ABV is 11.3 percent. If it feels a little strong to you, you can lose 4 oz. or so, but much lower than that and pasteurization will take longer and possibly not work at all.

Eggs: As mentioned, if you’re immunocompromised, use pasteurized eggs. If all you can find is a carton of pre-cracked egg slurry, make something else.

As for whites vs. yolks, lots of recipes call for the whole egg. The white will add lighten up the texture, especially if you separate it from the yolk and beat it into soft peaks first. I don’t dislike it that way, but I prefer the rich intensity of yolks only.