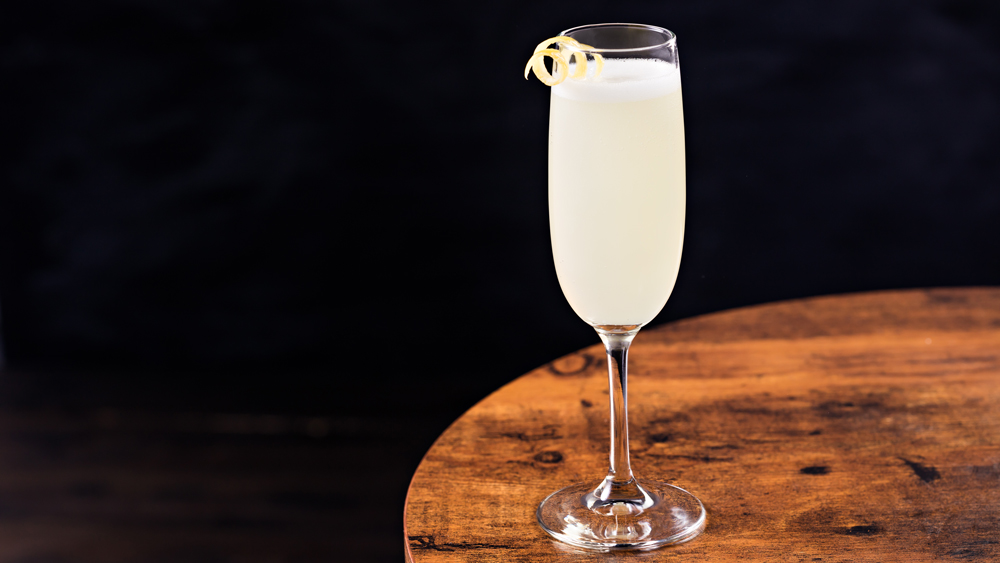 The French 75 made quite the impact when it was first introduced, to say the least.

I don’t mean the cocktail, I mean the cannon. Before gin and Champagne ever got involved, the French 75, officially “Matériel de 75 mm Mle 1897,” was a 2,700-lb field gun rolled out by the French to fight WWI. It was a closely guarded secret for years, a huge leap forward in artillery technology, capable of hitting a target six miles away with a 13.7-lb shell, and—because of a newly invented hydro-pneumatic recoil mechanism—it could do so 15 times a minute, a combination of accuracy and speed which was at the time completely unheard-of. The weapon became internationally famous among soldiers and civilians alike, and the people of France took it as a point of national pride that the French 75 was the gun that helped seal victory.

“This drink is really what won the War for the Allies,” joked Here’s How, an amusing little cocktail book from 1927 in which the French 75 (the drink) first appears. The weapon had been claimed as the namesake of other cocktails as early as 1915, but the Here’s How recipe is the one that stuck, and after it was reprinted in Harry Craddock’s famous Savoy Cocktail Book in 1930, it was as good as law: gin, lemon, sugar and Champagne. Craddock, ever laconic, added by way of etymology just four words: “Hits with remarkable precision.”

Made as it originally was—which is to say, a full-strength cocktail into which was mixed a half glass of wine—the French 75 certainly had the firepower to earn its name. These days it’s been appropriated by the brunching set, and the proof in most recipes has been brought down to terrestrial levels. At its best, the French 75 is a bright and charming drink, a crowd pleaser of the highest order, with the kind of protean simplicity that both encourages and rewards experimentation. It is so deeply associated with celebrations that it’s practically intrinsic (just to drink them is, in and of itself, a celebration) and in my personal opinion, is an entire order of magnitude more sophisticated than the cloying obsequiousness of Mimosas.

Never mind that through random historical accident the most elegant and well-known sparkling wine cocktail of all time is named after a machined steel anti-personnel cannon from WWI. These things happen sometimes.

The recipe has seen some tweaking in the last 90 or so years, and there are three versions worth talking about:

Shake first three ingredients over ice. Strain into a chilled flute, and top with about 3 oz. of chilled Champagne.

Using actual, real Champagne here is the quickest and best way to make this drink as good as it can be. Made as above, this is very much a cocktail defined by the sparkling wine (especially as it warms), and Champagne has the depth, power and grace to handle that responsibility. It’s not important what kind of Champagne, there are enough rules in that part of the world that if the bottle says “Champagne,” it’ll be great. Also an option here is a very high-quality Cava or Franciacorta, as long as they’re made in the traditional method and have seen sufficient bottle conditioning.

Shake first three ingredients over ice. Strain into a tall glass over ice, and top with about 3 oz. of sparkling wine.

While pretty much all modern French 75s come in flutes, both the original Here’s How and the Savoy recipes call for the cocktail to be served in a tall glass, on ice, making this a Tom Collins with sparkling wine instead of soda water. In fact, of the 14 examples of the French 75 I could find in cocktail books from 1927 to 1977 and one in 2002, all but three of them call for the cocktail to be served on ice in a tall glass (the cocktail in flute, it seems, was a product of the ’80s and ’90s, much the same way that era saw everything appended with -tini and poured into a stemmed cone).

Ice adds dilution, keeps it ice cold and reduces effervescence, but what it really does is reduce the focus on the sparkling wine. It levels the playing field—while it is obviously still great with Champagne, it’s also exceptional with much more affordable Cava or Prosecco.

Shake first three ingredients over ice. Strain into a flute and top with about 3 oz. of Champagne or sparkling wine.

Though it is very much a gin drink, many modern recipes for the French 75 call for “gin or cognac.” As best I can tell, cognac’s little coup traces back to a 1948 cocktail book called The Fine Art of Mixing Drinks by a rather opinionated tax attorney named David Embury, who’d never tended bar professionally a day in his life, but who nonetheless wrote a book about it. “Gin is sometimes used in place of cognac in this drink,” he writes, “but then, of course, it no longer should be called French.”

Whether by skill or by luck, his facile observation led to a wonderful variation of the drink (truth be told, it’s not hard to come up with great variations here, but the Cognac really is good). It’s got a richness and depth that, even in a flute, shares focus with the bubbles, and coaxes out all the wonderful stone fruit and mineral qualities you maybe didn’t even know your Cognac had in it. This is the house version at the aptly named Arnaud’s French 75 bar in New Orleans, and for good reason: it’s delicious.

Note here that cognac can have a little sweetness in it so I upped the citrus a touch—if you find that a little too lean, feel free to reduce the lemon juice to 0.5 oz.