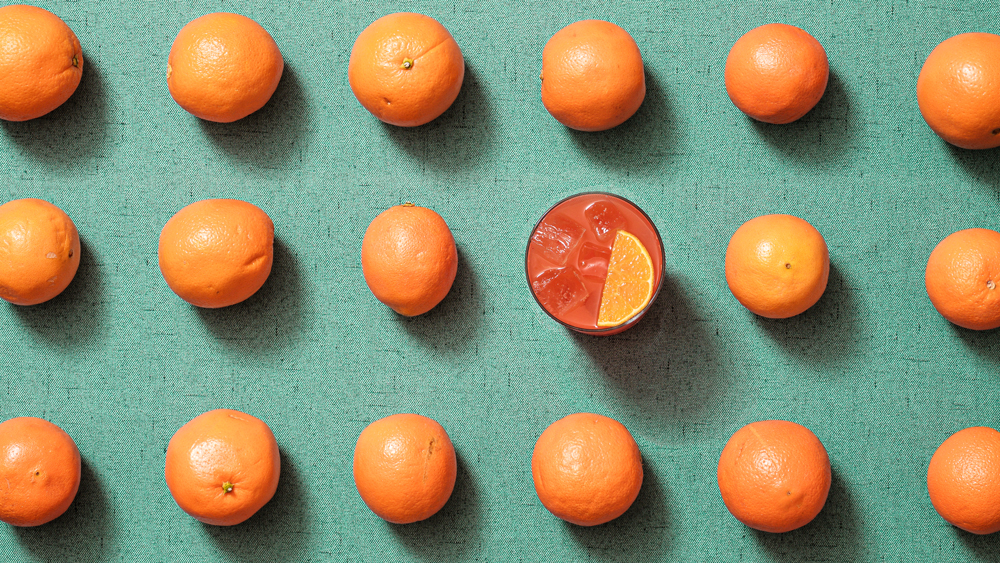 “Life at best is bittersweet,” once wrote the author and artist Jack Kirby.

Who could disagree? The fact that Kirby wrote comic books and put this line in the mouth of a Ninja Turtle is immaterial. That simple construction, just five words, is both obvious and profound.

Kirby wasn’t thinking about the Garibaldi, but he could’ve been. It, too, is bittersweet. Weighing in at just two ingredients, it is also simple, and with its buoyant texture and depth of flavor is also profound, although, as cocktails go, it wouldn’t be right to call it obvious. Better to say it was an idea whose time had come.

The Garibaldi is the house cocktail of Dante, a Manhattan institution that has sat on MacDougal St in Greenwich Village for over 100 years. In 2015, Dante changed hands and got a facelift—now looking, mused The New Yorker, like “an Italian aperitivo bar designed by Wes Anderson”—but owner Linden Pride and then-creative director Naren Young took pains to pay homage to the old Italian neighborhood vibes, while still looking forward to the future. It worked. In 2019, the 50 Best people anointed it the Best Bar in the World.

The Garibaldi is Campari and orange juice, two ingredients have been mixed together since roughly forever, and it acquired the name Garibaldi, we think, by the late ‘80s—Campari is from Milan, in the north, and oranges grow famously in Sicily, in the south, and so it was named for Giuseppe Garibaldi, one of the leading figures of the unification of Italy. It’s popular in Italy and at old Italian American cafes like Dante but was seen by the whole mixology movement as a dusty old relic, not even worth mentioning, more famous among Italian grandfathers than American bartenders.

Dante changed all that with a single innovation, in my opinion one of the most brilliant insights in the last two decades of this craft. It wasn’t to add bitters or tinctures or vacuum seal a house-made whatever, it was to change the texture, the very medium of the drink. The Garibaldi, as it was, was flat. Boring. Dead, even. You could shake it, breathe life into it that way, but the ice melt would thin out the drink. It was fine, a nice enough low-proof thing for brunch or something, but even an amateur could think of a dozen more exciting things to do with Campari without batting an eye.

What Young and his team decided to do—this aforementioned innovation—is cut off the peel and pith of the oranges, and then juice the fruit to order in a high-speed Breville juicer. This seems like a minor tweak; it is not. At the time, no one juiced citrus in centrifugal juicers, and if someone did, it was a hilarious mistake from a brand-new bar prep, the kind of thing where you’d give the kid a soft pat on the back and gently remind them to never make such a stupid mistake again. But Young saw an opportunity, like with Dante itself, to reimagine and reanimate this old Italian classic. Where normal orange juice is pressed, Dante’s is pulverized—the whirring blades send out the juice as white and frothy as a breaking wave, and when stirred with Campari and a bit of ice, it makes a blissful and profound summer aperitivo, texturally playful, vividly flavorful, devastatingly simple, and as bitter and sweet as life itself.

Add liquids to a short glass with three ice cubes and stir to combine. Garnish with an orange wedge.

Campari: Where Campari is strictly necessary in things like the Negroni, here there’s room to play. I admit I haven’t messed around too much with this variable because I’m so in love with this drink just the way it is, but I can’t think of any of Campari’s competitors that wouldn’t be at least interesting. Stick to the bright red aperitivos—something earthy like Cynar or floral like Amaro Montenegro will make a different drink entirely—but Cappelletti Aperitivo, Select Bitter, Luxardo Bitter and others will all be good and interesting here.

Fluffy Orange Juice: I’m tempted to tell you to buy a centrifugal juicer just for this drink, but I admit that’s a bit much (though I’ll assume at least a third of you reading this have one tucked away in a closet or something and you should absolutely break it out for Garibaldis). I’m happy to report that a good blender does almost as good of a job—add the juice to the blender, and blend on high for 10ish seconds. You can try shaking if you want to, but don’t shake with ice or else you’ll get orange juice that’s slightly aerated and very watery.

Honestly, Campari and regular orange juice is still pretty good, provided that the juice is fresh. And when I say fresh, I don’t mean “not from concentrate,” I mean fresh, as in you literally just juiced your oranges. When I was being unkind to the 1980s version of the Garibaldi above, I was assuming that it was made with bottled orange juice, as I’m sure it almost invariably was. We’ve said this before but of all the citrus juices, orange is the one with the biggest difference between fresh and even one-day-old. Fresh orange juice is a revelation.