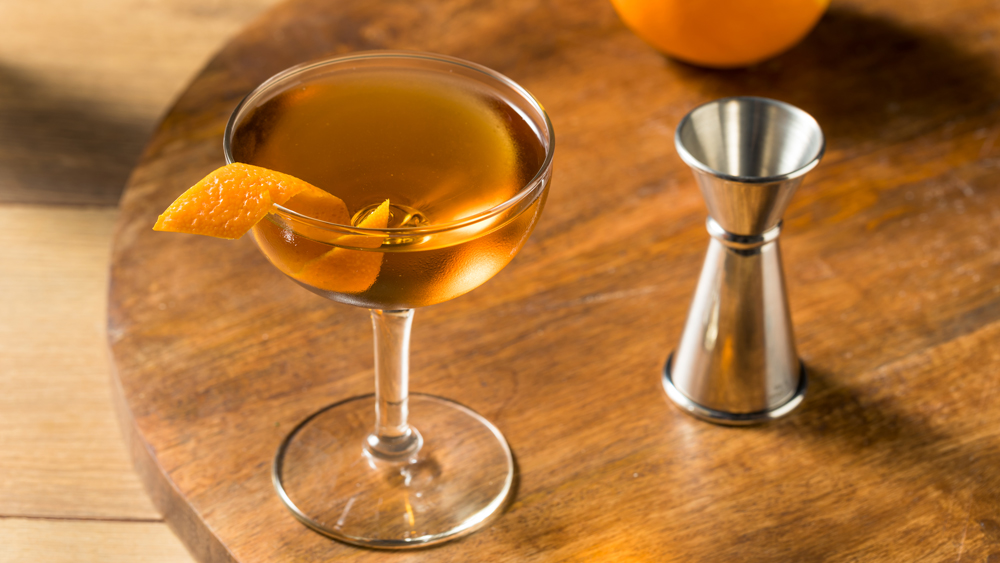 The Hanky Panky is not called the Hanky Panky because it’s an aphrodisiac. We’ll leave that to oysters and the music of Marvin Gaye. And the “hanky panky” in question is not what your parents were worried you’d be doing in the back of a Studebaker in 1955. The phrase has blossomed into a sexual thing, but when the cocktail was invented in 1921, it meant something more like magic—a lot more “hocus pocus” than “hotline bling.”

Actor and theater producer Sir Charles Hawtrey needed some magic when he wandered into the American Bar at London’s Savoy Hotel in the early 1920s, looking for a drink. “Coley,” he said, “I’m half dead. What can you do to make me quite alive?”

The “Coley” in question was Ada “Coley” Coleman, head bartender at the Savoy and, at the time, perhaps the most famous female bartender in the world. Her father died in 1899 when she was 24, and being unmarried found herself with a sudden and somewhat urgent need for a job. She got hired at a London hotel arranging flowers, then moved to the bar, and then ultimately transferred to the big leagues, to the American Bar at the elegant Savoy Hotel. She was a gifted bartender, endlessly charming, and quickly worked her way up to head bartender, where she served for 22 years. If you were drinking and glamorous in London in those two decades, odds are good you were drinking with her; she hosted Mark Twain, Charlie Chaplain, the Prince of Wales… it goes on and on. “It was she who made the bar famous,” asserts cocktail historian Ted Haigh in his Vintage Spirits & Forgotten Cocktails, and indeed, when she retired in 1925, at least two different London newspapers published articles documenting her legacy.

But back to Hawtrey, and his moribundity. He was, according to Coleman, “one of the best judges of cocktails that I knew,” and so she gave him something she’d been working on for a while: Equal parts gin and sweet vermouth—a gin Manhattan, essentially—but instead of the standard dashes of bitters, a bit of the Italian medicinal liqueur Fernet-Branca.

As reported in the Oxford Companion to Spirits and Cocktails, Hawtrey had produced a play just two years before called Hanky Panky John whose title character was “nicknamed Hanky Panky because he had invented a cocktail so-called.” It’s not a stretch to imagine that a cocktail lover such as Hawley was waiting for a real-life drink to claim this honor. He took a sip of Coleman’s invention. “By Jove!,” he exclaimed “this is the real hanky-panky!” What else could she call it? The name stuck.

A hundred years later and the cocktail’s name has aged like a lace doily, but while it may sound like an antique, it thankfully doesn’t taste like one. The gin and sweet vermouth complement each other famously (it’s two-thirds of a Negroni, after all) and the latter at a quantity that might suggest that this is a mild and genteel cocktail, but for the black magic of Fernet-Branca—that most pugilistic of amari—where the tiny addition is still enough to sharpen the drink’s softness, festooning it with a mane of needles. The resulting cocktail is like a Golden Age movie star, seductive but bracing, beautiful but with a quick tongue, and every bit the “real hanky-panky” that it was when Coley invented it all those years ago.

Add all ingredients to a mixing glass with ice and stir for 10 to 20 seconds. Strain up into a cocktail or martini glass, and garnish with an orange peel.

Gin: The Fernet is loud enough that this isn’t such an important choice. I like this with Beefeater, Tanqueray, Bombay Sapphire, Hendricks, pretty much everything I tried. The only thing I didn’t like is gins that are too soft. Plymouth, for example—bottled at the modest 41.6 percent—is an incredible gin, but not for this purpose. The gin needs to stand up to the Fernet.

Sweet Vermouth: This is a little more prescriptive. We tried a half-dozen vermouths for this cocktail, and the confounding thing is that the two favorites—Dolin Rouge and Cocchi Vermouth di Torino—are stylistic opposites. Dolin is lithe and quiet and makes an elegant, lightly spiced version. Cocchi is decadent with vanilla richness and makes a rounder and deeper version. Both are great.

Fernet-Branca: As we’ve mentioned before, Fernet-Branca is the biggest, but there are dozens of bottlings of Fernets. It’s not load bearing here—not required to answer to any kind of balance—but instead just provides a prickly little accent mark to the cocktail and therefore you could happily use any type of Fernet you like, and the cocktail would change, but not necessarily for the worse. Go with God.