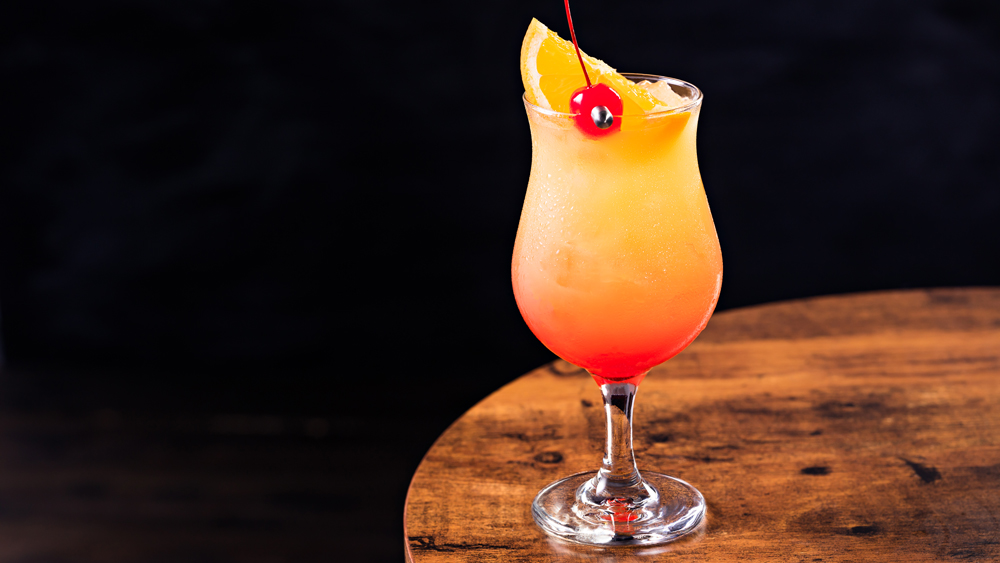 There are two ways to make a Hurricane.

The first is something of a tall order for one person, as it involves warming an ocean and maintaining a low-pressure system as the earth’s Coriolis Effect spins your storm into a spiral. The other way is to combine a heroic amount of rum with citrus and passion fruit (and perhaps more) in a curvy glass. We actually know less about the formation of this latter Hurricane, but I suspect most people would still prefer it to the weather event. Not only is it easier to make, but its inevitable fallout is more individual and tends to be a lot funnier.

The Hurricane (the cocktail) is a creation of a New Orleans institution called Pat O’Brien’s, which sits a half-block off Bourbon St. in the French Quarter, as it has since 1942. Pat O’Brien’s actually has a number of claims to fame—they have the city’s most famous (and probably only) flaming courtyard fountain, and they are hailed as innovators within the dueling piano bar community. In addition to these, and most germane to our discussion today, they created the Hurricane in the ‘40s, the story goes, as something to do with a chronic oversupply of rum.

This is unusually cut and dry for cocktail origin stories. We know who invented it, we know where, we even know why. What we don’t know is how it’s made, or at least, how it was made. The original recipe used a syrup called “fassionola,” all but discontinued now, which was lurid red and evoked, we’re told, a passionfruit fruit punch. Many well-respected tiki people like Jeff “Beachbum” Berry and Martin Cate just go ahead and call it a passionfruit syrup, so their Hurricane recipe is simple as rum, lemon, and passionfruit syrup. Others, like celebrated New Orleans bartender Chris Hannah, take the fruit punch approach, adding orange juice and grenadine, and some go further still, with Galliano and simple syrup and vanilla, and so on.

For Pat O’Brien’s part, these days they’ll happily tell you that a Hurricane is 4 oz. of “Pat O’Brien’s Amber Rum” and 4 oz. of “Pat O’Brien’s Hurricane Mix,” which, of course, is of no use to anyone. In fact, while the online recipes largely disagree with each other, the one thing on which they seem united is that the version you’ll get at Pat O’Brien’s today isn’t very good—Serious Eats calls it “weird tasting,” Punch calls it “best described as ‘red-flavored,’” and Beachbum Berry himself writes that it’s “noxious cherry-flavored bottled mix,” adding of Pat O’Brien’s that you should “go for the lovely patio garden, but order a beer.” This leaves us with a bizarre little dilemma. It’s nearly Mardi Gras and so we want to make Hurricanes, but we literally don’t know how.

In order to choose the plan of attack, we need to establish what we’re aiming for. To start, it’s not important to me personally that the cocktail be candy-apple red—if it’s important to you, grab a bottle of fassionola on Ebay. The tiki version with just three ingredients is terrific, but the original had a mélange of fruit as opposed to just one, so I personally lean toward Hannah’s approach with orange and grenadine. And in order to get it to not taste like a bucket of juice, I like Cointreau instead of orange juice, offering floral top notes to harmonize with the grenadine and passionfruit.

As it turns out, the Hurricane is not named as such because “it packs a punch” (though it does) or because “it knocks you over” (though it may) or any of the hammy things you’d expect. It’s named after the glass they serve it in, which resembles a hurricane lamp. As for when to drink one, the season for this particular Hurricane is the two weeks leading up to Mardi Gras, when it seems like a patriotic and religious obligation to have at least one. Yes, even for a tiki drink it’s a bit juicy… but if you imagine that you’re in New Orleans, wearing eight sets of beads of questionable provenance, having just left two baby grand pianos “dueling” each other in head-to-head musical faceoff and walked onto a patio where an 8-ft. cooper water fountain is also for some reason on fire, it all starts to make a bit more sense.

Add all ingredients to a cocktail shaker with crushed ice. Shake briefly to whip, then empty contents into a curved “Hurricane” glass and garnish with an orange slice and a cherry.

Proportions: Another thing everyone agrees on is that the Hurricane is, and has always been, a staggering 4 oz. of rum. This is insane, so my recipe ignores it (the Cointreau is 80 proof making this a considerable 2.5 oz. of spirits, which is more than enough). If you have a novelty 26-oz. hurricane glass and want the proper experience, feel free to double the recipe, but I indemnify myself from the consequences.

Rum: Pat O’Brien’s calls for an “amber” rum, which works. As does a not-too-funky Jamaican dark rum like Myer’s. What you want here is some richness from the rum but not too much depth or too much oak—something light and accessible like Flor de Caña 7 or even Cruzan Aged works great.

Passion fruit: Passion fruit is the hardest to find, and the most necessary. I suppose I should say that if you have access to them, actual passion fruits will add the best and fullest flavor, but it’s a luxury and not everyone does. In my bar, we always use the Perfect Puree Passion Fruit Concentrate, which is exceptional in cocktails, bright and almost electrically tart, and the balance of the above recipe is predicated upon it. The Smuggler’s Cove book recommends Funkin Passion Fruit. If fresh is too hard, you can get a great passion fruit syrup from Liber & Co. and Small Hands Foods, but remember, a syrup will bring sweetness too, so you’ll have to reduce the amount of grenadine.

Grenadine: It’s very possible is to make your own grenadine, which can be as easy as dissolving equal parts sugar into POM pomegranate juice, or as complicated as something like this. If you can’t be bothered, Liber & Co. and Small Hands Foods also make great grenadine, as do many, many others. Just please don’t use Rose’s, in whose ingredient list you have to pass Sodium Benzoate and Red #40 before you get to “natural and artificial flavors.”

Cointreau: As mentioned, this cocktail can suffer from a barrage of too much fructose. Cointreau is a nice solution to this, as the distillation of orange peels gives a bright, light, clean orange presence, like those wispy clouds on a sunny day that are too high and thin to cast any shade. I do recommend Cointreau in particular, or Combier—lesser triple-secs will weigh it down.