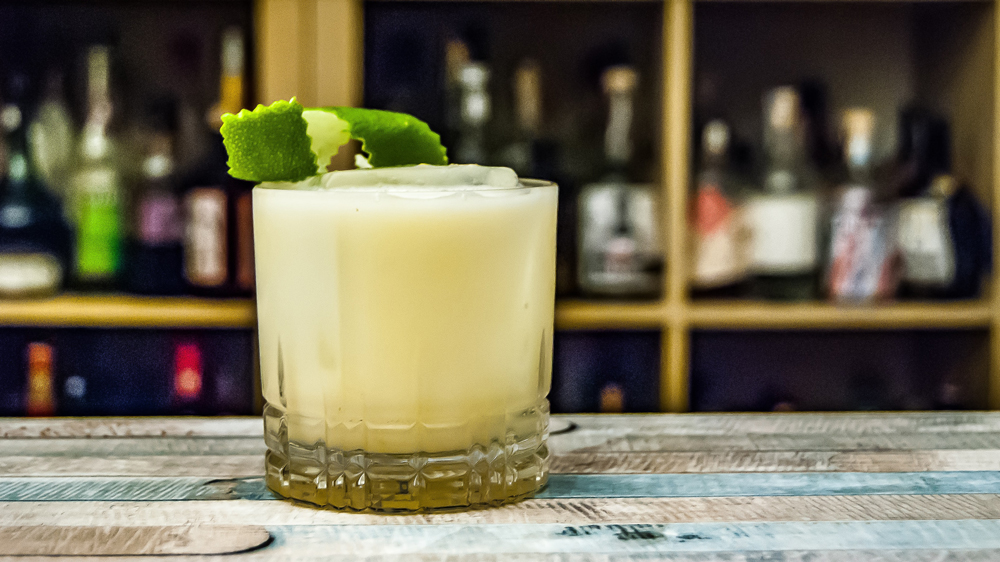 Let’s just pretend for a moment that Margaritas are a summertime drink, as opposed to the anytime & always drink we obviously know them to be. All its famous colleagues are summertime drinks, after all—the noble Daiquiri, the flamboyant Mojito, the stolid Tom Collins—and there’s certainly a case that the Margarita’s snappy tart refreshment belongs in the summer. And let’s further stipulate that the Oaxaca Old Fashioned is for the winter, its deep resonant spice a warming presence on a cold night.

When the mixological archeologists of the future look back and find these two, they’ll certainly be looking for the proverbial missing link, an evolutionary bridge, a cocktail with one foot in summer and one in winter, refreshing but spiced, ice cold but warming. And if they’re good, they’ll find the Infante.

It won’t be easy for them. The Infante was invented by Giuseppe Gonzalez in 2009, when he was working at Dutch Kills in Long Island City. Gonzalez is pretty famous in bartender circles, but I’m not sure even he would call this drink a modern classic. I have only ever found it sporadically; it’s in a lone cocktail book, A Spot at the Bar, written by someone who knew Gonzalez personally, and in the indispensable Bartender’s Choice app, but as far as I can tell, that’s it.

This is pretty understandable, great cocktails are invented all the time and no one ever hears about it. But what sets the Infante apart, why I love it and why I’m telling you about it today, is its simplicity and elegance. It’s commonly misunderstood that you have to use elaborate and/or difficult ingredients to make good cocktails. Not so. The opposite, actually—if your cocktail calls for clarified tomato water or an infusion of oyster shells it certainly might be good, but truly delicious ideas tend to be simpler.

In the case of the Infante, that idea is to replace the agave nectar and/or orange liqueur of a Margarita with orgeat, an almond syrup made beautiful with a touch of orange flower water. This seems simple, but it’s a seismic shift; where a Margarita is all bright refreshment, the Infante, named for golden-age singer and actor Pedro Infante, blends that refreshment with a nutty decadence. Tequila is an unusually character-driven spirit and the orgeat folds into that character like a dream, the almond lending body to the spirit’s midpalate, with a breath of the orange flower water on the finish giving a perfumed warmth to the tart lime. It’s a Margarita with more depth and presence, one for cooler nights, a Margarita that brings a jacket to dinner, even though it may not end up needing it. The Infante is a spiced and resonant, the perfect cocktail for the beginning of fall, that time of year where we sometimes find ourselves needing to pretend that it’s not Margarita season anymore.

Add all ingredients to a cocktail shaker and shake on ice for six to eight seconds. Strain over fresh ice into a rocks glass and garnish with shaved fresh nutmeg over a lime wheel, a lime peel or nothing at all.

Tequila: This cocktail certainly works with blanco tequila, but the kiss of age of a good reposado brings some welcome oak and vanilla, which helps the cocktail be more itself. My favorite brands here are Fortaleza and Siete Leguas, though they can be semi-difficult to find, so I always like to mention Olmeca Altos as well, which is I believe the best high quality, low price reposado out there that’s also widely available.

Orgeat: There are, loosely speaking, two types of orgeat: The almond-as-core-flavor kind and the almond-as-minor-note kind. Most drinks that call for orgeat work just fine with either of these, but this drink really demands the former. For brands, go with something almond forward like Liquid Alchemist, Liber & Co. or Small Hands Foods. You can also make your own if you like, but it will involve toasting, blanching and/or pulsing almonds in a food processor. If you’re game for that kind of thing, there are lots of recipes online, like here.

Orange Flower Water: This is optional, but it helps. Good orgeat has orange flower water in it already, but this cocktail benefits from a touch more, which you can buy on Amazon or in any decent middle eastern market.

Nutmeg: I’m torn on the nutmeg. The original definitely has shaved nutmeg on top, which enhances the spiced richness, but it also makes the flavor a bit noisy and the clarity suffers. Basically, it enhances and detracts from the drink in different ways but in (to me) identical amounts, so it’s hard to know what to do. If you have it on hand, give it a shot—my one recommendation here is that it’s pretty much all aroma, so I add a lime wheel on top and aim for that with my nutmeg, so it’s not just floating like dandruff on the top of the drink.