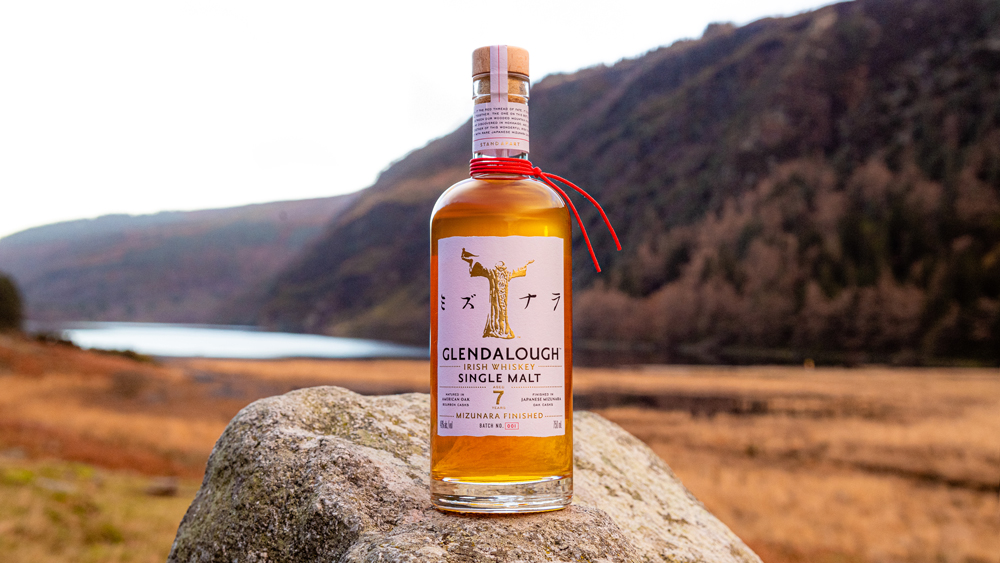 On a recent frigid late winter afternoon, I met up with Louise McGuane, founder of Irish whiskey bonder J.J. Corry (more about that term later), to discuss all things related to the ever more popular category of brown spirits. In addition to diving deep into her own whiskey, she had some frustrations to air. “I walked into a bar in Boston with all these incredible scotches on the back bar,” she told me. “They had three Irish whiskeys and two of them were on tap. On tap!” The fact is that many people still think of Irish whiskey as the shot that goes with your beer. And that’s fine, I guess, but it’s antithetical to the care and detail that goes into many smaller Irish whiskey brands like McGuane’s. “I don’t want you doing picklebacks,” she said. “We’ve gotten ourselves into a trap of growth that’s fueled by this kind of thing [e.g. shots and taps], and that’s dangerous. For the longevity of the category, we need to elevate it. I hate to say it, but often when I walk into bars I have to tell them, just think of it as a scotch.”

Every year those paying attention to such things hear about the explosive growth of Irish whiskey, a category that includes blends, single malts, single grain and single pot still whiskeys. According to the latest data from the Distilled Spirits Council, more than 5.9 million cases were sold in 2021 with revenue of $1.3 billion, much of which is fueled by high-end and super premium expressions. “In terms of the growth of Irish whiskey, we see it across the whole range,” said Kevin O’Gorman, master distiller at the Midleton Distillery just outside of Cork, on a recent Zoom call. “Jameson is driving the whole category, as it always has done. Other distilleries around Ireland benefit from that. But over the past two years, we’ve seen an incredible increase in premium whiskeys like Jameson Black Barrel, Redbreast, the Spot range, and Midleton.”

McGuane isn’t convinced that these numbers truly represent the state of the spirit, however, with smaller Irish whiskey brands like hers still facing an uphill battle. “That stupid statistic comes out every year, and it drives me crazy,” she said. According to McGuane, Jameson represents about 88 percent of the Irish whiskey market, then another 10 percent goes to other big brands, leaving about 2 percent for the smaller players. “Jameson is to Irish whiskey as Tito’s is to vodka in the US,” she said. “You have one dominant player, so you cannot track the category by that. I always remove the Jameson statistics from my data, and look at the super premium section. That is growing by double digits every year… But the more Jameson you sell, or the more Proper Twelve you sell at $13 a bottle, the harder it gets for the rest of us.”

Fortunately for the rest of us, there are many new Irish whiskeys to enjoy this St. Patrick’s Day, and all year long, from distilleries both large and small, and many fall into the super premium category. These range from blends to single malts with interesting cask finishes to high-end ultra-aged expressions. Here are nine of the best Irish whiskeys to try now.

Louise McGuane has fully embraced the lost practice of whiskey bonding in Ireland with her J.J. Corry brand. This involves both sourcing aged whiskey from various distilleries, as well as procuring barrels of new make spirit to age, finish, and blend in her own facilities. The core expression of the J.J. Corry lineup is called The Gael, which is now in its third batch. The components are 40 percent grain and 60 percent malt whiskey, broken down specifically as follows: 5 percent 26-year-old single malt (ex-sherry cask), 27.5 percent 11-year-old single malt, 27.5 percent 15-year-old single malt and 40 percent 7-year-old single grain. All that comes together in a blend that will give any single malt a run for its money, as deep flavors of fruit, caramel, spice and espresso intermingle and demand another sip.

This brand-new whiskey is an interesting blend of grain, malt and pot still whiskey that was aged in seven different cask types from six different continents: South African brandy, Japanese Mizunara, European sherry, American bourbon, Caribbean rum, Australian tawny and Colombian rum. Tim Herlihy is a co-founder of the brand, and the man certainly knows his stuff having worked as brand ambassador for Tullamore D.E.W. and written a book with the Dead Rabbit founders called From Barley to Blarney: A Whiskey Lover’s Guide to Ireland. The whiskey was distilled at Great Northern Distillery and aged for a minimum of four years. There’s a lot going on with this blend, but it seems the producers have come up with a good formula. The nose is creamy and fruity, with apple and orange notes coming through. And the palate is sweet and light, with notes of cantaloupe, lemon, vanilla and toffee followed by just a hint of astringency. This would be a good cocktail whiskey as well as a sipper.

This whiskey, distilled by Darryl McNally at the Royal Oak Distillery, is a cask-strength single malt that was aged in ex-bourbon barrels and finished in PX sherry casks. This is the second of three releases distributed by Altamar Brands, a company that imports various types of spirits, and the first of two Irish whiskey releases. This no age statement whiskey was  bottled at 58.7 percent ABV, it’s not chill filtered and no additives are included. For those that enjoy high-proof Irish whiskey, this bottle delivers with a bit of spice, a dollop of fruit and a nice mix of dried fruit, vanilla and dark chocolate notes.

While Bruichladdich recently released the first biodynamic scotch whisky this winter, Waterford was ahead of the curve when it launched the first biodynamic single malt whiskey, full stop, in the fall. What that means is the barley used to produce the whiskey was biodynamically farmed by three Irish growers, a process that links soil, animals, people and terroir by using some unconventional practices (burying cow horns filled with manure, for example) and is guided by the lunar calendar. According to CEO Mark Reynier, the benefits can be seen in both the environment and flavor of the whiskey. The whiskey was aged in a combination of casks, including first fill and virgin oak from the US, French oak and vin doux naturel barrels. This is a vibrant whiskey with some underlying spice, verdant fruit notes and a bit of vanilla cream binding it all together.

Egan’s is a whiskey name with a long history of bottling and bonding in Ireland, which was ultimately discontinued in the 1960s. But the brand was revived nearly a decade ago and has been sourcing and releasing some excellent expressions since then. There are just 1,000 bottles available of this new Irish single malt whiskey, the last in the Legacy Reserve series from Egan’s. The defining characteristic of this series of whiskeys is initial maturation in bourbon barrels, with a secondary finishing period in another cask type. For the fourth release, an 18-year-old whiskey was transferred to Moscatel de Valencia casks that were used to age this sweet Spanish dessert wine. The fruit, wood, vanilla and tannin of the whiskey are buttressed by notes of sweet and syrupy candied fruit, vanilla, fig, orange and a hint of spice.

This isn’t the first time Glendalough has released a Mizunara oak-finished whiskey, as a 13-year-old version launched a few years ago. But there’s a reason for that. The Japanese oak is thought to imbue the whiskey with delicate notes of spice, whiffs of smoke and a bit of floral fragrance, all notes that complement an Irish single malt very nicely. This is a 7-year-old whiskey aged initially in ex-bourbon barrels before being transferred to Mizunara casks made from oak sourced from the Japanese island of Hokkaido. The wood took three years to dry before heading to the cooperage, and while their porousness makes them difficult to turn into barrels it also allows a great deal of interaction between the liquid and the wood. Look for notes of sandalwood (very common with Mizunara oak), dark chocolate, orange and hot cinnamon.

This actually isn’t technically an Irish whiskey, but a blend of Irish and American whiskey. Specifically, this new whiskey is composed of the following: triple distilled pot whiskey from Ireland aged for at least four years in bourbon barrels, Irish grain whiskey also aged for a minimum of four years in bourbon barrels and American 95 percent rye whiskey aged in new charred oak. There is some serious whiskey power behind this brand, as former Midleton master distiller Brian Nation joined the team in Minneapolis at the new O’Shaughnessy Distillery to spearhead the distilling and blending process. While Keeper’s Heart whiskey is currently all sourced as it just commenced operations last summer, the whiskey produced there will be made in the Irish style, triple distilled in copper pot stills. In the meantime, give this blend a try to see how the spice from the rye interacts with the fruit and vanilla of the Irish whiskey.

This is the 39th installment in the Midleton Very Rare series, and the second that current master distiller Kevin O’Gorman was in charge of. It’s a blend of whiskey aged from 12 to 33 years, the oldest being grain whiskey and the youngest a pot still whiskey. O’Gorman says he used 12 different parcels of whiskey for this release, and slightly decreased the grain element from the level of the 2021 edition. Ultimately, he came up with three blend prototypes before settling on what is now in the bottle. This is a lovely whiskey, highlighting just how complex and delicate an expertly crafted blend can be. Look for fruit on the nose, with strong candied apple and citrus notes. The palate erupts with red apple, orange zest, toffee, and chocolate, bringing together the best elements of grain and pot still Irish whiskey.

It’s not very often that you’ll find an Irish whiskey as old as this single malt, part of Teeling’s Vintage Reserve Collection. It was distilled in 1991 and initially aged in bourbon barrels for 21 years before being transferred to Sauternes wine casks for another nine. This release continues Teeling’s stretch of releasing progressively older whiskeys, following previous 24- and 28-year-old expressions, all of which were distilled at Cooley decades ago (Teeling is now actively distilling and bottling whiskey onsite in Dublin as well). Dusty wood, caramel apple and mango open up on the nose, a faint whiff of tropical fruit that you might expect from a similarly aged scotch. Then the palate continues with pineapple rum, spice, pepper, vanilla, honey yogurt and milk chocolate. This pricey bottle is worth sampling if you are lucky enough to find one.