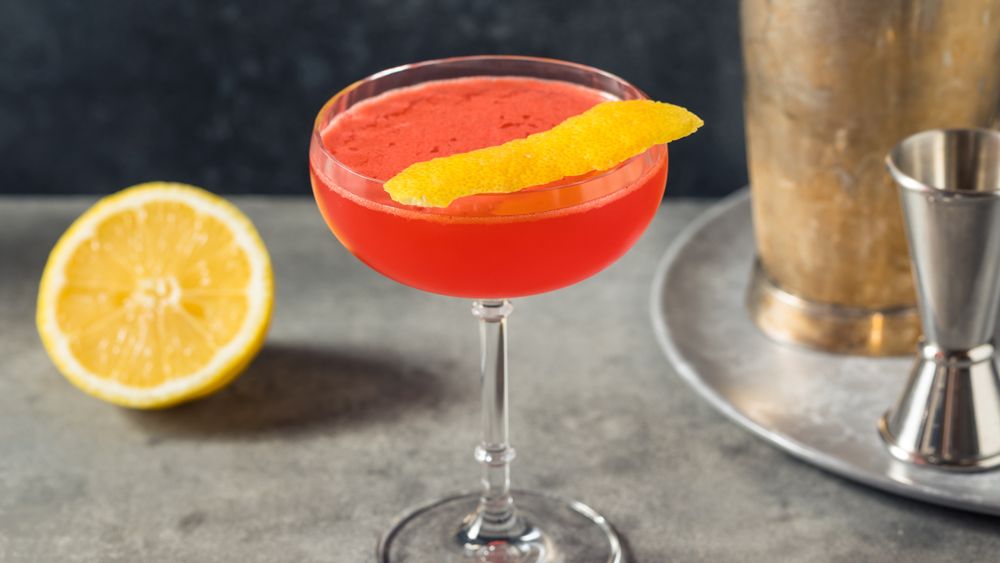 “The average host,” wrote David Embury in 1948, “who makes no pretense of being an expert on liquors, can get along very nicely with a knowledge of how to mix a half dozen good cocktails.”

Embury’s book, The Fine Art of Mixing Drinks, was as influential then as it is now and offers a rare and precious insight into the norms of midcentury drinking culture. So what are these “half dozen” drinks he deemed essential? “They are the Martini,” he says, “using gin; the Manhattan and the Old Fashioned, using whiskey; the Daiquiri, using rum, the Side Car, using Cognac; and the Jack Rose, using applejack.”

I expect he had you nodding along until that last one. The Martini and Manhattan’s place on that list is indisputable, the Old Fashioned is necessary to the point of obvious, and the Daiquiri, properly made, is life changing. Modern sensibilities would probably sub out the Margarita for the Sidecar, but it’s the same drink, just with tequila instead of Cognac. But the Jack Rose? We can almost hear you through your screen: “What the hell is a Jack Rose?”

There was a time, in the early 1900s, when the Jack Rose was the hottest thing around, a fantastic use of this weird new sweetener called “grenadine” that had recently hit American bars. There are at least six distinct and competing origin stories and a bunch of slightly different recipes, but as early as 1914 it settled into our current understanding, which is a simple sour made of apple brandy, lemon or lime juice, and pomegranate syrup (aka grenadine). Hemingway mentions the Jack Rose twice in The Sun Also Rises in 1922, and still a generation later, David Embury, as quoted above, inducted it into his little hall of fame.

What a difference 50 years makes. By the year 2000, the Jack Rose was nearly forgotten, and with decent reason: Fresh citrus was an endangered species in American bars, apple brandy was nearing extinction and good grenadine seemed a contradiction in terms. In 2003, a couple cocktail fans, having just read The Sun Also Rises, resolved to go find a place in Washington DC that could make them a Jack Rose, and it took 60 bars across five attempts. When they finally “succeeded,” it was made with Applejack, sour mix and what I’m sure was Rose’s Grenadine, none of which can make a good version of this drink.

Here’s the thing—all of this is familiar, and the idea that the recipe or ingredients were bad and/or lost from the ‘70s through the ‘90s is just as true of the Martini, the Manhattan, the Old Fashioned, the Daiquiri and the Sidecar. So where’s the Jack Rose now? Why hasn’t it bounced back like the rest of the crew?

The answer is that the Jack Rose is a deceptively hard drink to get right. On one hand, it’s a simple sour, and balancing sours is easy. On the other hand, grenadine, citrus and apple brandy all have tart fruit notes, and if you’re not extremely careful, they’ll pile onto each other, all hitting at the same time and making the tartness of this drink numbingly sharp. To be very honest, I had always considered the Jack Rose more important for cocktail books than cocktail bars, and even using bonded apple brandy and fancy grenadine, I, myself, had never had a great one until I started doing research for this article. I even suspected the Jack Rose might have been incapable of greatness. I have, I see now, never been more wrong.

There are in fact not one but three ways to make this cocktail great—a diffusion less about personal taste than about ingredients, and how much work you’re willing to do on your own behalf. But choose any one of the below and the Jack Rose is a transcendent and exceptional sour, the acidity snappy instead of sharp, the red fruit deep instead of sweet and the overall effect worthy of its storied past.

My absolute favorite. If you can be bothered to make fresh grenadine, which is to say, to juice your own pomegranates, you will be handsomely rewarded (it’s easy!). Fresh grenadine is that scene in The Wizard of Oz where Dorothy walks outside and everything’s suddenly in Technicolor. If you’ve never met a grenadine drink you thought was great, it’s because you haven’t tasted real grenadine. Here, combined with the abundant character of the French apple brandy (“Calvados”), the drink is buttery and bright and rich and tart, the fruit notes at once delicate and resonant. It’s exceptional.

Regarding the spirit—I preferred it with the funkier Calvados, but if you don’t love those flavors, it’s just as good with American apple brandy, from a producer like Clear Creek or Laird’s. Just make sure it’s not Laird’s standard “Applejack,” the 80-proof version, which is 35 percent apple brandy and 65 percent neutral flavorless alcohol. There was a time that was all we had, but that time is over. Laird’s makes a 100 proof “bonded” apple brandy, and a newer, 86 proof “Applejack” that’s 100 percent apple brandy. Both are great.

If you can’t juice pomegranates, which is fine, I advise Calvados over American apple brandy. The cocktail needs midtones to come from somewhere—fresh pomegranate juice has it where pasteurized doesn’t really, and Calvados has it where American apple brandy doesn’t really, and you need one of those two. So if you’re using grenadine you made with POM Wonderful pomegranate juice, or else grenadine you purchased in a store (I strongly recommend Liber & Co.), Calvados will still bring the character and charm you need.

This is the version you’ll get in most cocktail bars. If you can’t get (or don’t want) Calvados, and if you can’t juice (or don’t want to juice) your own pomegranates, fair enough, just change the citrus from lemon to lime. This is a bigger change than it seems—the acidity of lemon juice hits at the exact wrong time, but lime is somehow perfect: It starts high and ends low, and totally transforms the drink. With lime, it’s less about the delicacy of the pomegranate and more like a oaky and red-fruited Daiquiri, with a snappy refreshment and clean finish.