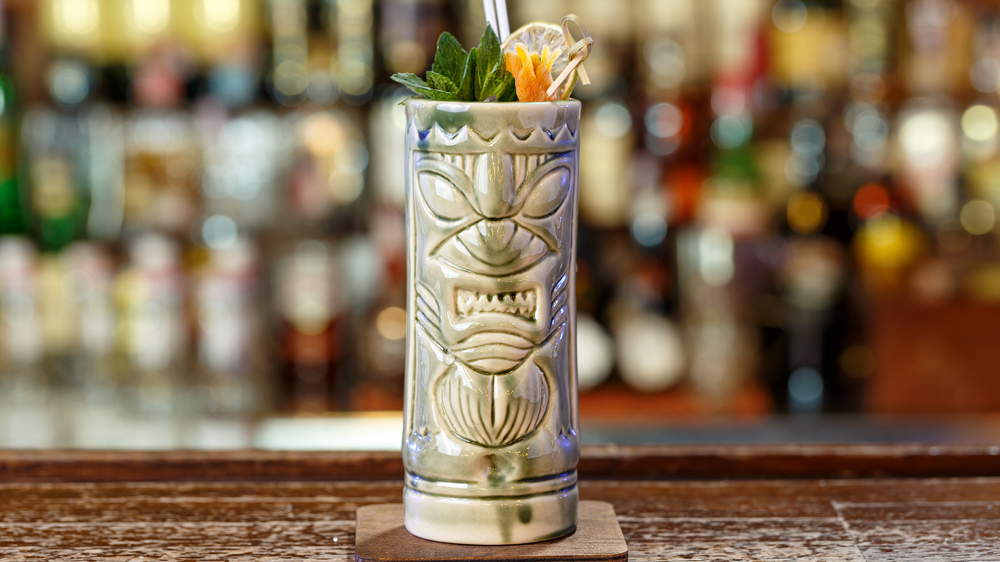 There’s an aphorism in cocktails: The more ingredients a drink has, the less likely it will be great.

Look at the legendary classics: the Manhattan, the Martini, the Old Fashioned, the Margarita, you name it, almost all of them have three or four ingredients. Restaurateur and cocktail educator Erick Castro sometimes says a cocktail is more like a sculpture than a painting, which is to say, it’s more about chipping away the superfluous than adding embellishment. And while this is true, it’s a truth that has a giant asterisk next to it, and that asterisk is called tiki.

Tiki is what happens when you take something garish and baroque and decide to lean in. Your average tiki bar has absurd pan-cultural flotsam decorating every square inch, and the average tiki drink has what feels like a dozen ingredients, a half dozen garnishes and is often served in a ceramic mug that looks like it was designed to scare children. It’s the opposite of the aforementioned minimalism. Despite the ludicrousness, tiki persists because the bars can be extremely fun and many of the drinks are undeniably delicious.

Take the Jet Pilot, for example. The Jet Pilot is essentially a Daiquiri—rum, lime and simple syrup, one of the world’s great three ingredient drinks—put through a kaleidoscope. The citrus is split in two (now both lime and grapefruit), the sweetness is split in two (now both cinnamon syrup and falernum), it picks up a couple dashes along the way (both absinthe and Angostura bitters) and, incredibly, uses not one rum but three. This seems excessive, and provokes two questions: One, is that really necessary? And two, is it any good?

To answer in reverse order—yes, the cocktail is better than good, and as vivid an illustration as is available of the incredible versatility and power of combining rums. No single (commonly available) rum can do the job required of the spirit in the Jet Pilot. You need at least two. In all our trials, a single rum was either too woody or too funky or too soft or too hot, and it’s only in combination that the spirits strike the right chord. The wrong rums make a Jet Pilot that’s befuddled and mediocre, but the right rums make this drink absolutely sing.

As to the other question—is it necessary? Of course not. It’s also not necessary to have an indoor waterfall or play recordings of howler monkeys from speakers that resemble coconuts. Tiki is about a lot of things, but “necessary” isn’t one of them. Tiki is about exuberance, escape, flamboyance and adding as many ornaments as a thing can possibly support. It’s about taking a Daiquiri and tripling the number of ingredients, just to do it. Tiki is there to remind us that not every worthy human endeavor is, strictly speaking, necessary. Try out a Jet Pilot see.

Shake on crushed ice and dump into a large rocks glass. Top with more crushed ice and garnish with a cinnamon stick, a spent lime half, a grapefruit half-moon and/or a small figurine of a Pan Am airplane, if you happen to have one lying around.

Cinnamon Syrup: Just slightly less simple than simple syrup: take 4 oz. sugar, 4 oz. water, and 1 cinnamon stick that you’ve broken into a few pieces, put it on the stove, stirring occasionally to the sugar dissolves. Simmer for five minutes, then let cool and strain. Can be done with 1 or 2 tsp. of ground cinnamon, but it’ll be gritty and not quite as good. Makes 6oz cinnamon syrup, or enough for a whole brigade of Jet Pilots.

Falernum: Falernum is a cocktail flavoring traditionally from Barbados made from clove, almond, lime and sugar. Some are syrups and some are liqueurs—the gold standard here is John D. Taylor’s Velvet Falernum, which will add the flavors you want but not get too heavily spiced (the bitters and cinnamon take care of that).

Angostura Bitters and Absinthe: It’s such a minor note, use whatever absinthe you like, it’s just there for licorice tones. Take heed that the recipe calls for 1 dash of a 50/50 mix of absinthe and Angostura Bitters, so you’re aiming for a half-dash each—you can add a little more Angostura if you like, but keep a light hand with the absinthe.

If you don’t have absinthe, you can use a sweetened Pastis or Anisette if you like, just use a small amount (about a “barspoon,” or 1/8 oz.) and deduct that quantity from the falernum to keep it from getting too sweet. And if you don’t have any of that you can honestly still make the drink, absinthe helps but it’ll still be good without it.

Lime juice: Internet recipes invariably call for 0.5oz of lime juice. I’ve upped it to 0.75 oz. because I found all of those too sweet.

Rums: The rum blend above is the one you’ll find most places on the internet, with some small tweaks. This indeed makes a terrific Jet Pilot, but unless you work at a rum bar, it requires more explanation:

In our tests, we found that the two you really need are the Jamaican Rum and the mild aged rum, at 1 oz. each. If one of them is “high proof,” which is to say, above 55 percent alcohol or so, that could be sufficient. If not, you’ll need a little extra push:

For Jamaican Rum: What you need from your Jamaican rum is that inimitable “hogo” funk, so Appleton Estates won’t work here. The funky one you can most easily find is the robust Smith & Cross, which makes a very good version. You can use Rum Fire as well, or really anything from Hampden Estates you can get.

For mild aged rum: Plantation 5, Flor de Cana 7, Don Q, whatever. You want a soft aged rum that will pick up the sweetness and spice of the cinnamon.

For overproof rum: If you end up using two rums that are both on the lower proof scale (40 to 45 percent alcohol), the cocktail will be too soft. You can fix this with a bit more (0.5 oz. to 0.75 oz.) of your mild aged rum, or you could recruit a smaller pour (0.25 oz. to 0.5 oz.) of your overproof rum. If you do go overproof, the standard advice is to do a Demerara rum like Lemon Hart 151, but I found the depth they bring a little too heavy. I’d go as dark as Plantation O.F.T.D or as light as Bacardi 151.