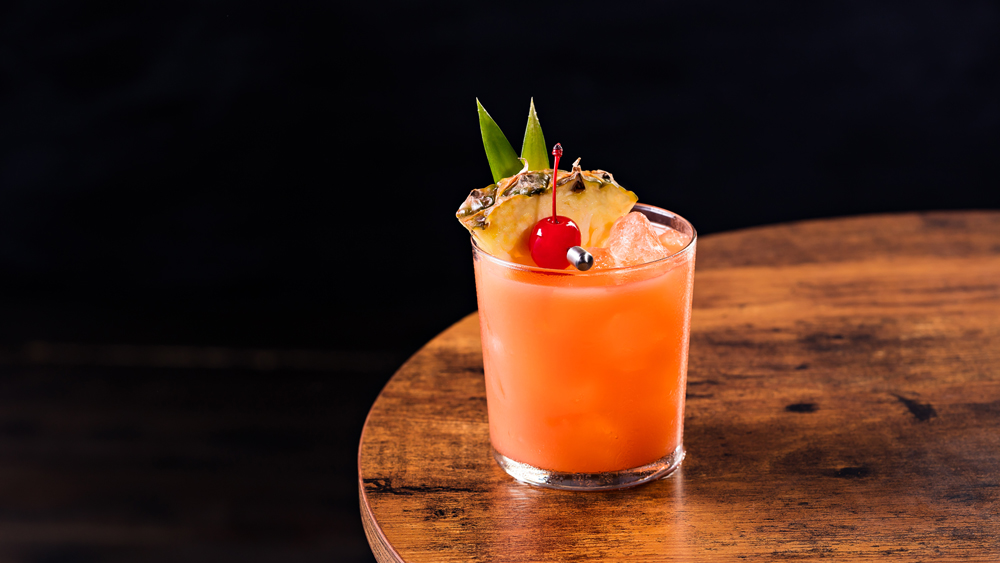 Across the entire classic cocktail universe, no drink has suffered more indignity—had more liquid crimes done in its name—than the Mai Tai.

No other drink, save for perhaps the Daiquiri, has been forced to bear silent witness as several generations of Americans toast each other with unbalanced buckets of juice they were led to believe were “Mai Tais,” forced to watch for some 50 years as bartenders steadily conflated Mai Tais with some kind of boozy Hi-C, best served in 36-inch novelty cups on the Las Vegas Strip, and bitterly cursed from behind dark sunglasses the following morning.

It is the unwilling liquid mascot of the most gallingly exploitative and commercial constructions of Oahu, and has come to represent what people think they don’t like about tropical drinks, which is to say, that a night of them should be garnished with a shot of insulin.

None of this is the Mai Tai’s fault. It was framed for these saccharine crimes, and I can prove it: the actual Mai Tai—the original, 1944 version—only has one fruit juice in it, and it’s lime.

The story goes like this: Victor Bergeron was running Trader Vics, a tiki bar in Oakland in 1944, when some Taihitian friends arrived. They asked him to make a drink out of a 17-year old bottle of Jamaican Rum, so he considered for a moment, added some lime juice, orgeat (almond syrup) and orange curaçao, shook it up and gave it to them. They took one sip and proclaimed “Maita’i roa a’e,” which means something like “The Best of All.” He shortened this to Mai Tai, and the cocktail was born.

It would be a decade later when Bergeron, hired to adapt his creation to the presumed sweet tooths of Waikiki tourists, created the orange/pineapple/grenadine/vanilla monstrosity you likely know. Fortunately for all of us, the original recipe still stands, an older testament, to which true pilgrims can always return.

Add all ingredients together in a tin with crushed ice. Shake briefly, about 5 seconds, and empty contents into a tropical-looking 14oz-ish glass. Pack with more crushed ice and garnish with a juiced lime husk and a sprig of mint, so it looks like a palm tree on a small green island where no one has to work or wear masks or hear about an election for the next three months.

Now, this recipe may seem simple enough, but its straightforward nature requires special attention to each ingredient. Here are some tips to getting each one right:

The big question. Wray & Nephew 17 year Rum doesn’t exist any longer. Many good recipes try to recreate that mix of funk and weight with a blend of some aged Martinique rum, for grassy character, and aged Jamaican Rum, for weighty funk. Some go a step further and mix in some heavy Guyanese rum, with its rich brown sugar and molasses notes. And while this is an extremely agreeable combination, I acknowledge that a three-rum blend is overkill when we’re talking about your home bar.

You want an aged rum with some weight to it—rums that are too light can’t anchor this drink the way it needs—and that are not overly sweetened (no “spiced” rums). I recommend going one of two ways: 1. An aged Jamaican Rum like Appleton Estates Signature Blend because it’s inexpensive and fairly available and has richness without the sometimes-off-putting funk Jamaican rums can bring; Or 2. Guyanese Rum (it’ll say “Demerara” Rum, named for the local river) like El Dorado 5 or 8, or the Hamilton Demerara Rum.

We’ve said this here before, but if there’s one thing you can do to bring your at-home cocktails to the next level, it’s fresh citrus. This is the biggest gun in your arsenal to keep the sweetness down, so any kind of “sweet & sour” simply won’t work here. A citrus press is relatively inexpensive and if you get a decent one, it’ll last forever.

I call for 1 oz lime juice, because my tastes run a bit tart. It’s totally acceptable to start at .75 oz, and then add more if you feel the sweetness still needs to be reined in.

Orgeat is a non-alcoholic syrup made from almonds and a little rose- or orange-flower-water. It isn’t too hard to make it yourself, but it’s even less hard to buy— there are tons of brands and they range somewhat broadly between nominally almond-flavored (e.g. Torani, Giffard) and intensely almond-flavored (e.g. Small Hands Foods, Liquid Alchemist). While they both make great Mai Tais, I personally enjoy the depth of the latter.

A vodka-based triple sec like Cointreau or Combier is just fine here, but I prefer the oaked vanilla notes from a brandy-based curaçao. Grand Marnier works excellently, as does Pierre Ferrand’s Dry Curaçao, or the rum-based Clement Creole Shrub.

If you can crush some ice right before serving, please do. This is a boozy drink (2 oz rum with .5 oz of 80 proof liqueur) and while crushed ice isn’t strictly necessary the way it is with a Mint Julep, it helps. Wrap some in a dish towel and smash it with a meat tenderizer or rolling pin. No need to get perfect little cubelets, you just want it ice cold and well mixed.