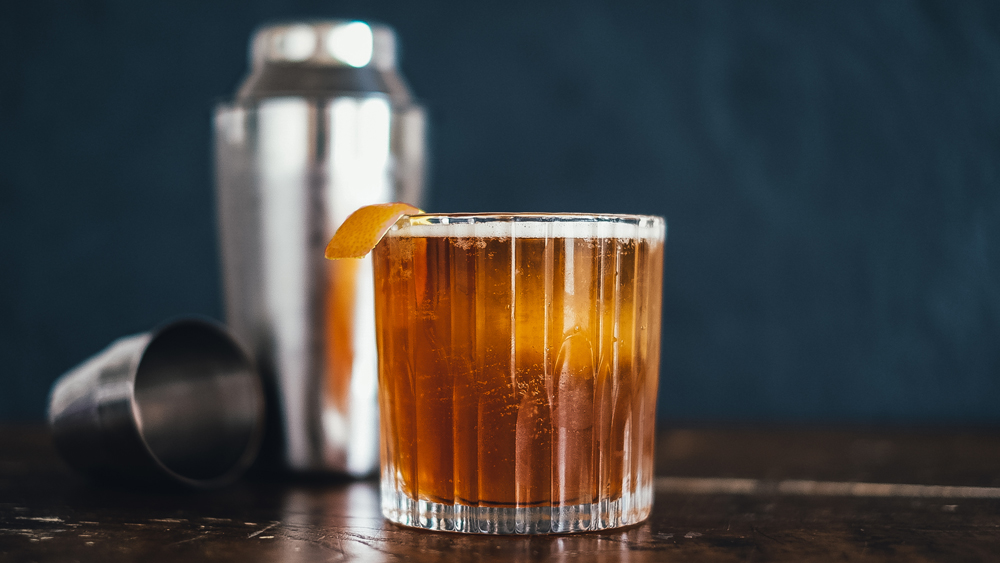 I have a theory: I think that when someone is talking about living somewhere warm— Phoenix or Los Angeles or something—and says “but I would miss the seasons,” what they’re actually saying is that they would miss the fall.

Winter, depending on where you’re from, can range from invigorating to pitiless, but there’s something enchanting about fall. The crispness in the air. Leaves turning colors. Warmer clothes still have a novel thrill. It’s what you would yearn for if you—or in the case of this particular cocktail, a bartender named Jason Schiffer—relocated to Southern California.

“I was missing my favorite time of year back home in Michigan,” Schiffer explains, “remembering pumpkin-carving parties my Mom took me to when I was a kid, raking leaves and making cider from the apples we foraged in nearby orchards.” It was 2011—he had been out west for more than a dozen years and at the time owned and operated a bar called 320 Main in Seal Beach, a seaside community just down the coast from LA. It’s warm all the time in Southern California, where, he says, “you can lose the seasons if you’re not paying attention, ingredient-wise”—so he endeavored to create a cocktail that captured the particular electric magic of autumn in the upper Midwest.

For his drink, Schiffer wanted to name it something that underscored the inspiration and rooted it in a sense of place and time, so he chose the name “Michigander,” which is the ridiculous word people from Michigan use to describe themselves. “I had a picture in my mind with these nostalgic tastes and smells,” he says, and so he grabbed apple brandy, an obvious seasonal choice, and added to it Cynar, a bitter earthy Italian liqueur that, when mixed with the apples, tastes like how a freshly raked pile of leaves smells. Honey, normally a springtime flavor, serves here to give a warm sweetness to the apples and fresh lemon juice ensures the whole project doesn’t get too sweet. As a garnish, a grapefruit peel, adding a slightly numbing textured bitterness to the experience, ties the whole thing together. It’s autumn in a glass. It really is remarkable.

He would continue to tinker with the recipe, ultimately creating a cocktail called the Detroiter (bonus recipe at bottom) which is a version of the Michigander topped with a couple ounces of a bitter IPA—Detroiters, presumably, being among the most bitter of all Michiganders. Of the two, it’s the Detroiter that gets more attention, and the one Schiffer put into the excellent Home Bar Basics (and Not-So Basics), the home bartending manual he recently co-authored with Dave Stolte. Personally though, as a fellow Midwestern transplant to Southern California (and fellow bartender), I have a particular love for the Michigander. I forget about it most of the year but then a craving emerges annually, ostensibly out of nowhere and always right around October, when only things like the Michigander can mollify that marrow-deep part of me—that cheddar-eating, mitten-wearing, flat-”a”-accented Midwestern part—that looks at the trees and just knows that the leaves should be a different color.

Add all ingredients to a cocktail shaker. Add ice and shake for 8 to 10 seconds. Strain into a rocks glass over fresh ice and garnish with a grapefruit peel.

Apple Brandy: Back in 2011, Schiffer made the original with Laird’s Applejack, a “blended” product, which in their case means a blend of 65 percent neutral spirits and 35 percent apple distillate. Much better is their Laird’s Bonded Apple Brandy, 100 proof and 100 percent apples, which is widely available. That said, pretty much any brand of 100 percent apple brandy will work great here—avoid anything over-aged, “XO” or older than say 8 or 10 years, as the oak will mute the apples. The more apple flavor, the better. The French calvados works amazingly well, as do other domestic producers, like Clear Creak, Rhinehall and others. Use whatever you can get.

Cynar: A robustly bitter and earthy Italian liqueur. It is flavored with 13 herbs and plants, among which is the noble artichoke, which practically bursts forth from the front label looking like a piece of Soviet propaganda. Cynar also gets its name from the Latin genus of the artichoke (cynara), and is therefore often referred to as an “artichoke liqueur,” but that’s not quite right. It doesn’t taste like artichokes really, or any particular plant, but is rather an amalgamation of all its ingredients, deeply vegetal and bitter and complex.

Honey Syrup: Honey is too viscous to use as-is in a cocktail, because it’ll turn to stone once it touches ice and not mix with anything. For cocktail work, we need to make a honey syrup—two parts honey, to one part warm or hot water and stir until combined. If you have a scale in your kitchen, this is a great time to break it out; honey, like a bad ex-girl or -boyfriend, has a tendency to cling, so if you can measure it by weight instead of volume you’ll be saving yourself a headache, but honestly either works.

This drink presents a touch on the sweet side, then dries out with bitterness on the finish. If you find yourself allergic to sweetness, you can reduce the honey to 0.5 oz., if you prefer. Personally though, I’d keep it where it is. Pretty much every fall treat worth enjoying has a touch of sweetness to it.

Garnish: The garnish is unusually important here. It shades in the honey’s lingering sweetness, adding a citrus-tinged bitterness that’s almost a touch numbing, and that, like a well-chosen scarf, really brings the whole outfit together. If you absolutely love grapefruit’s zesty bitterness, as I do, consider doing the “royal” shake, like with the Gold Rush: Throw a 1-inch to 2-inch peel of grapefruit in the tin, and shake it with the cocktail, before straining and garnishing with another.

Add all ingredients except IPA to a cocktail shaker. Add ice and shake for 6 to 8 seconds. Add IPA to tin, then strain into a rocks glass over fresh ice and garnish with a grapefruit peel.