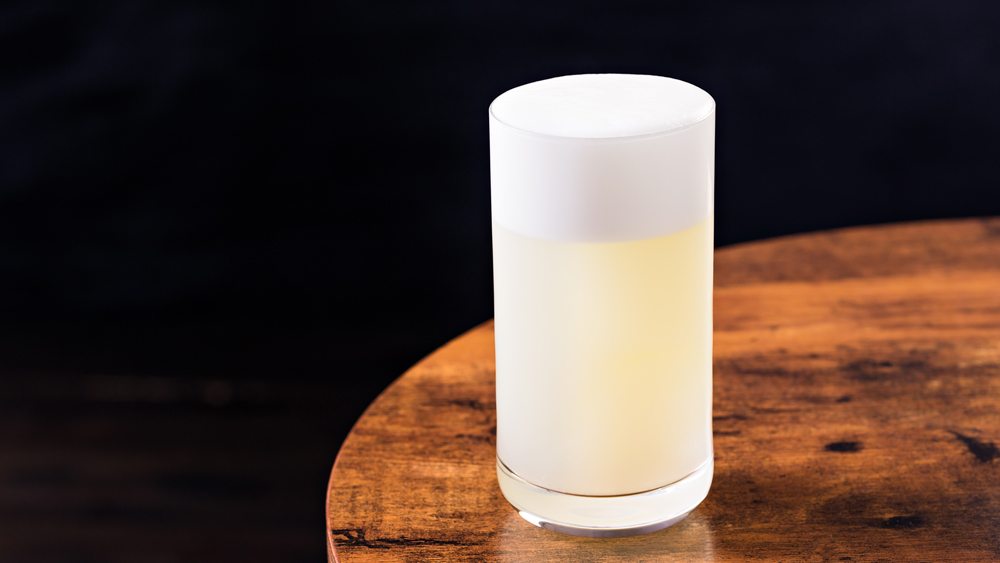 There is nothing—nothing whatsoever—about scotch whiskey that suggests it might be nice to have for breakfast.

Even if it’s your favorite spirit, this is probably not news to you. While there are no rules about this kind of thing, there are customs: Champagne is about celebration, tropical drinks are for when it’s hot outside, and it would be safe to say that as a general rule, scotch—the malty, frequently smoky, full-proof aged spirit, best sipped neat by a fire or considered from a deep leather chair—is more of an evening activity. Honestly, it can be intense even then, frequently deployed toward the end of the night to soothe the myriad small insults and injuries accumulated from yet another day of being alive. Scotch is definitely for the end of the day, not the beginning.

“Perhaps so,” replies the Morning Glory Fizz, “but what if you cracked an egg in there?”

Amazing though it seems, this isn’t a joke. The Morning Glory Fizz—scotch whiskey, lemon juice, sugar, an egg white, soda, plus a couple dashes of absinthe—is meant, without the slightest hint of irony, to welcome the day. “The author respectfully recommends the above drink as an excellent one for a morning beverage,” writes Harry Johnson in his 1882 New and Improved Bartender’s Manual, “which will give a good appetite and quiet the nerves.”

Quiet the nerves indeed. As we mentioned about the Corpse Reviver No. 2, there used to be whole families of hangover cure cocktails—The Fog Cutter, the Gloom Lifter, the Anti-Fogmatic—drinks designed for so-called “morning after the night before.” The thing is, there’s no specific set of criteria by which a drink would be classified as such, so it’s really just about feel. Absinthe tends to help, crazy though that sounds, because while it’s both wildly intense and volcanically hot, in very small doses it can give a sunny herbaceousness to cocktails. Indeed, so helps the egg white, which tends to smooth down the sharp edges of its glassmates. Sparkling water is a natural for daytime, effervescence at its most elemental, practically liquid brightness. So it really just comes down to the scotch. Does the scotch work?

That’s the crazy part: It totally works. The Morning Glory Fizz is fantastic, somehow a perfect A.M. drink, the maltiness of the scotch turned full-bodied and biscuity in sweet-sour balance, while the egg white neutralizes the spirit’s intensity, and the soda water breathing life into the whole thing and making it work. It’s as good an example as any of the transformative magic of cocktails. Try one, at brunch, with your eggs.

Add all ingredients, except for the soda water, to a cocktail tin. Seal tightly and “dry” shake, without ice, for 5 to 8 seconds, in order to whip the egg white. Add ice, reseal and shake well for 10 to 12 seconds. Strain off the ice into a tall glass without ice, add the soda, garnish with a lemon peel or orange peel.

Scotch: While this (somewhat shockingly) isn’t bad with a smoky scotch, not even with a monster like Laphroig, the Morning Glory Fizz really shines with the malty, more honeyed, unsmoked style. A mild single malt from the Highlands or Speyside would be a great but expensive choice. The blended giants like Dewars and Chivas would great, as, honestly, does the lighter Irish Whiskey. If I could pick anything, though, it would be richer blends or blended malts: You can’t go wrong with something like Monkey Shoulder or Compass Box’s Great King Street Artist’s Blend, the smoother, richer, unsmoked and inexpensive side of scotch whiskey.

Lemon Juice: Fresh, as always. Originally, Johnson’s 1882 recipe called for both lemon and lime juice. Ignore that: Lime’s malic finish is too tart and threatens to derail the whole project. Use lemon.

Simple Syrup: Literally the simplest syrup. It’s equal parts, white sugar and water, and stir until the sugar is dissolved. Using hot water will make the sugar dissolve faster, but it’s in no way necessary. It’ll last a month in the fridge—toss when it gets carbonated (fermenting) or cloudy (molding).

Egg Whites: The odds of contracting salmonella from raw egg white in America are very low, 1 in 20,000, and those data are decades old and have likely shrunk further still. That being said, if you are immunocompromised or extra worried, use in-shell pasteurized eggs. If all you have is a carton of pre-cracked, pre-separated, pasteurized egg whites, make something else, a gin fizz maybe. And if you don’t eat eggs, a vegan alternative is Aquafaba, the thick liquid that comes in a can of chickpeas, which functions almost identically to egg whites in cocktails.

Absinthe: different bottlings of absinthe can vary wildly in character, but they’ll always be above 50 percent alcohol and taste heavily of licorice (if you really don’t like licorice, which seems to be 50 percent of the population, go ahead and skip the absinthe. It’s not necessary for the magic). If I could point you in a single direction it would be to a French-style absinthe like Pernod, St. George, Grand Absente or the like (they’ll be green), but if you already have a bottle of something different, just use that. Just a couple dashes, not too much. It’s just here for spice.

Garnish: If you like licorice as a flavor, garnish with an orange peel. It may just be me, but I find orange highlights the fennel-like character of the absinthe. If you don’t love it, garnish with a lemon peel, or nothing at all.