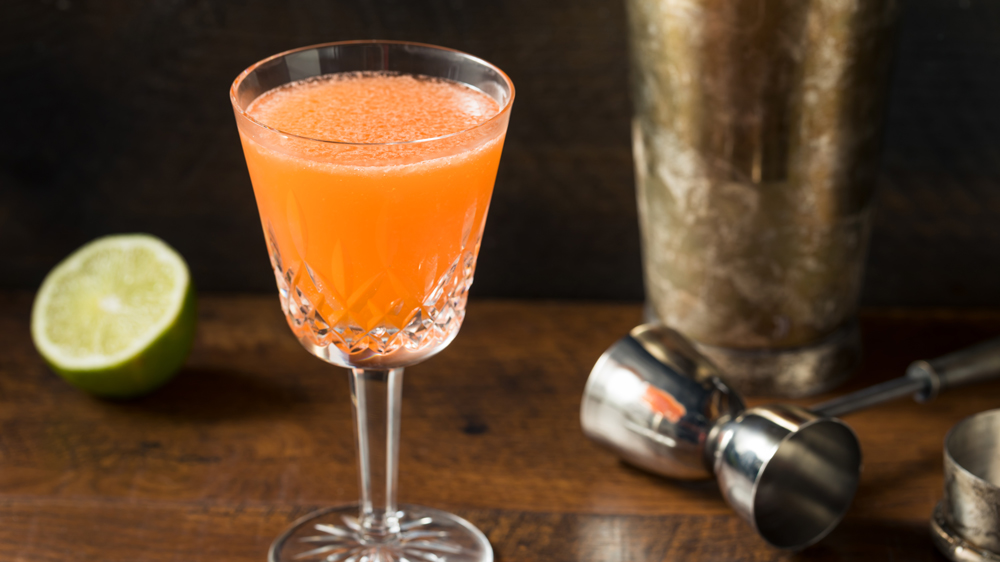 It’s unusually difficult to sum up the Naked and Famous, or at least it seems to be. For a mezcal cocktail, it is beloved by pretty much everyone who tries it, and just obscure enough that its fans enthusiastically proselytize. My problem is that they do it badly. They tend to miss the forest for the trees.

The Naked and Famous was invented by Joaquin Simó in 2011, at the legendary New York City bar Death & Co. It consists of equal amounts of mezcal, Aperol, Yellow Chartreuse and lime juice, and is, in a ubiquitously quoted line from Simó himself, “the bastard child born out of an illicit Oaxacan love affair between the classic Last Word and the Paper Plane.”

In a fundamental way, that’s exactly what it is. The genealogy goes like this: The Last Word was invented at the Detroit Athletic Club in 1916, fell into obscurity and then was resurrected in 2003. It has a usual template of four equal parts—one part spirit (gin), one part citrus (lime), and one part each of two liqueurs (Maraschino and Green Chartreuse). Then in 2008, bartender Sam Ross was playing with this template when he created the Paper Plane—just like the Last Word, it’s one part spirit (bourbon), one part citrus (lemon), and one part each of two liqueurs (Aperol and Amaro Nonino).

And so in 2011 here comes Simó with one part mezcal, one part lime, and one part each of the liqueurs Aperol and Yellow Chartreuse, which he puts together and names for a refrain from the song “Tricky Kid” by the English rapper Tricky. It’s got an evocative name and is explosively flavorful and everyone loves it, so before long someone asks him about his inspiration, and he replies with the aforementioned quote. And because Simó is a gifted and thoughtful bartender, everyone seems to stop there: a Naked and Famous is halfway between a Last Word and a Paper Plane. Right?

Wrong. That may have been his inspiration, but here’s the thing—aside from the fact that they’re all delicious, the Naked and Famous doesn’t taste like either of those cocktails at all. The Paper Plane tastes like a love letter written by a bottle of whiskey to a bag of oranges, and the Last Word is so herbaceous and intense it makes you question your own sanity. The Naked and Famous, on the other hand, tastes to me like nothing so much as a more interesting Margarita. The Yellow Chartreuse with its honeyed complexity imitates the lingering natural sweetness of the agave nectar, and the juicy bittersweet orange from the Aperol takes the role of the Cointreau, all atop a subtle smoky backbone. It takes a couple one-note ingredients in that classic and replaces them with complexity, while still keeping the overall shape. It really is remarkable.

In a way it doesn’t matter—the thing is the thing no matter what anyone says about it—but while the Naked and Famous may have been inspired by those other cocktails, it is a spectacular drink, and deserves its own chapter. It’s perfectly at home on its own or smuggled into taco night, and the tart lingering balance is the kind of thing that warm nights are practically begging for.

It is Simó’s most popular and successful cocktail, and as such, he is the only person the Naked and Famous could make famous. As for the naked part, I suppose that’s up to the user. Have fun.

Add all ingredients to a cocktail shaker with ice and shake for eight to 10 seconds. Strain off the ice into a cocktail glass or coupe, and garnish with a lime wheel or nothing at all.

Mezcal: It’s terribly convenient that the inventor of this cocktail is meticulous as Simó, because we can just ask him what mezcal to use. After many tests, he insists that the mezcal should be big and smoky—he’s partial to the Chichicapa bottling from Del Maguey, and while it won’t do your bottom line any favors, it is remarkable in this drink.

Aperol: Ordinarily I’d tell you to just use Aperol, but global supply chain shortages are deaf to my insistence that Aperol is a necessary ingredient, and as of this writing, it is slightly difficult to come by. Hopefully this will get sorted out shortly, but if you ever need a decent replacement, my favorites are the aperitivo from the always-excellent Luxardo, and the wine-based Cappelletti.

Every week craft bartender Jason O’Bryan shares the stories behind his favorite drinks. Check out his previous cocktail recipes too.