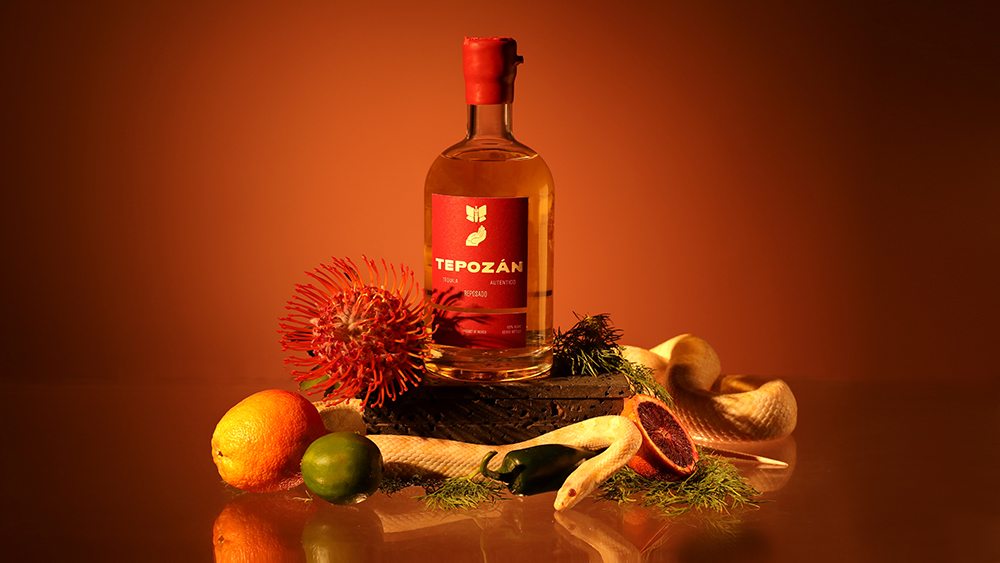 Forget about that traditional salt licking, lime-sucking “bump” the next time you take a sip of tequila. That is so 2020. Guests attending the recent Food & Wine Classic in Aspen, Colorado this past September were surprised with an updated gourmet awakening where, upon entering The Little Nell hotel’s Ajax Tavern patio, culinary director Matt Zubrod was handing out what looked like black-rimmed glasses of chilled vodka. Except it wasn’t vodka, it was La Adelita Single Estate Cristalino and the glasses were rimmed with a special caviar salt created by Chef Zubrod specifically to complement the Cristalino, which—instead of a lime wedge—was being paired with sustainable Hybrid Kaluga from the California Caviar Company.

“The Kaluga’s large, firm beads and bronze color packs a full flavor with notable minerality,” said Zubrod, explaining his decision to deviate from the norm. “I consider it a perfect marriage to La Adelita Cristalino’s initial sweetness, (which is) sparked by white pepper and nectarine zest.”

Zubrod’s pairing of caviar with cristalino (a category that didn’t exist before 2008 but now numbers more than forty, with two of the newest and best—Dahlia and Partida—spotlighted below) is just one of many innovative ways tequila is being adapted to meet a highly competitive market, which today has grown into more than 150 registered fábricas producing over 1,500 different brands, many of which are made by the same distillery, but using different formulas to create variations in flavors—much like Midwest Grain Products (MGP) in Lawrenceburg, Indiana produces numerous spirits for different companies. However, there are many others, such as Casa Noble, that remain dedicated to producing a single brand.

Tequila’s recent growth spurt started in 2020, when a locked-down, pandemic-tethered public found their cocktail drinking confined to home, was aided by the convenience of home delivery and e-commerce sites. According to the Distilled Spirits Council of the United States (DISCUS), overall the tequila market in the United States has grown 209 percent since 2002, but hit a crescendo of a 17.4 percent jump in production in 2020 over the previous year. Even with the resultant looming agave shortage, DISCUS expects this double-digit growth to continue throughout 2021.

Of course, that growth has attracted a slew of celebrities to make their own in the wake of George Clooney’s success with Casamigos. The market has been flooded with agave from the likes of Dwayne “The Rock” Johnson to Kendall Jenner’s widely panned 818 Tequila, which she named after her San Fernando Valley area code. It’s not all bad though. With Lobos 1707, we found a tequila worthy of an NBA all-star’s endorsement.

You’ll find all this and more with our selection of the best of the newest tequilas.

Elegantly bold on the palate yet with an underlying sweetness, this is a luxury cristalino that should be sipped rather than mixed. Aged for six months in ex-bourbon barrels followed by two months in ex-single malt, sherry-seasoned casks, this first-of-its-kind cristalino boasts flavors and aromas of dried fruit, cooked agave, toasted oak, vanilla and nuts.

Last year marked the 25th anniversary of this highly coveted limited edition’s annual release, which is sourced from the Jose Cuervo family’s private reserves of tequilas that have been made with ten-to-twelve-year-old fully mature agaves. That quarter century mark was the inspiration for the La Rojeña distillery to add an Extra Añejo to the Reserva de la Familia lineup for the first time. Aged in both French and American oak barrels for a minimum of three years, the honeyed, toasted agave and oak flavors are heightened by the addition of some tequilas as old as thirty years. This is a snifter-worthy pour.

From the makers of El Silencio Mezcal comes their first tequila, which interestingly enough, is a cristalino reposado that has been aged in American white oak barrels for six months. The result is a flavor that is so sweet and floral you would hardly know it was a tequila. Serve this chilled as an aperitif, or over a single cube of ice to bring out its candied finish.

This is not only one of the oldest of the new tequilas, it is one of the oldest and most expensive tequilas in the world. Although all of Código’s aged tequilas are matured in red wine casks, after being aged for thirteen years in French white oak Cabernet barrels, this “extra”- extra añejo is finished for an additional six months in French Cognac casks. The final results are nuances of sweet, aged vanilla typical of barrel-aged tequilas, but closely followed by whiffs of cocoa powder and cinnamon, and then a lingering middle taste of earthy peat and exotic spices. But after spending such a lengthy time in wood, 70% of this precious tequila was lost to “the angel’s share,” leaving just enough of this golden elixir to fill 350 decanters, with a few barrels held back for further aging.

To meet a changing, younger demographic, some distilleries have been redesigning their bottles and labels, but Casa Noble has gone one step farther, not only with a new minimalist, elongated bottle, but actually further refining their already triple distilled and certified organic tequilas. Basically, they are incorporating the best of their small batch single-barrels back into their blanco, reposado, and añejo expressions. This can best be experienced in their blanco. Crisp and flush with sweet, fresh agave, it forms the foundation for all of Casa Noble’s other tequilas.

Interestingly, the Consejo Regulador del Tequila (CRT) lists four specific additives that can legally be added to tequila without having to disclose them on the label, as long as their volumes are not more than one percent: glycerin, oak extracts, caramel coloring and sweeteners. However, Tepozán is one of the few tequilas that doesn’t use any additives at all. It is made with fully mature biodynamically grown agaves that are harvested, distilled and bottled by hand at the source, using natural volcanic rock-filtered well water from master distiller Don Carlos Padilla’s Highland estate, and local yeast sourced from nearby fruit trees. All of this comes together perfectly in Tepozán’s four-month-old honeyed and silky reposado, with its co-mingling of spicy oak, brown sugar and pineapple sage. The tequila’s name itself is taken from Jalisco’s Tepozán trees, known for attracting a number of butterflies each year, which the region interprets as a sign of goodwill and prosperity.

Call me a homer, but as a Lakers fan, when I found out Lebron James had invested in this tequila, I had to take a closer look. He brought us a championship, so I figured I at least owed it a try. And I liked what I tasted, especially the reposado, which has been aged for six months in American white oak barrels, then blended with a touch of three-year-old Lobos 1707 Extra Añejo, and finally finished in Spanish Andalusian Pedro Ximenez wine barrels. Indeed, this is unlike any other reposado I have ever sipped, with haunting notes of balsa wood intermingled with vanilla, and a distant but noticeable mixture of vegetables and fruit. Try it straight first, then as a Mexican Old Fashioned.