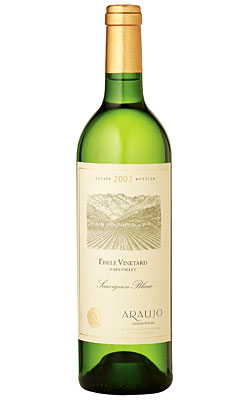 One seldom thinks about labels, except as a means of identifying a certain desired bottle among the phalanxes of competing bottles on the shelves of a wine merchant’s shop. In most instances, a wine label serves as a kind of billboard in miniature proclaiming, through delicately limned châteaux or offbeat abstracts, the indicated winery’s venerable lineage or courageous precocity, and the casual buyer (like the proverbial crow to a scrap of tinfoil) is drawn to its shine. But not all wineries must hawk their wares; their wines, produced in limited quantities, sell themselves, and unlike those minted by their more prolific colleagues, the labels they create speak more to how they view themselves and their winemaking than to how they wish consumers to view them. The superbly understated and finely etched label of Harlan Estate’s Proprietary Red furnishes one example—a wistful image rendered as painstakingly as the wine itself. Another such label is that of Kongsgaard Chardonnay.

This simple yet tantalizing tableau unites the primitive ornateness of a Cistercian illuminated manuscript with the muted tones of a stained-glass cathedral window in those last breathless moments of morning before dawn breaks to light its panes. The Gothic tone is apt, given the character of John Kongsgaard’s wine, whose massive mineral foundation rises gradually on the palate toward complex traceries of oak, citrus, and luminous acidity. While countless critics grumble about the ponderously fruit-filled, overly malolactic Chardonnays of California (and still more winemakers lay claim to Burgundian pretensions), this tiny family operation has quietly produced a white wine all its own that takes its cue as much from Montrachet or Meursault as from Napa—though it, like the Kongsgaards themselves, remains very much the product of the latter place.

Both Maggy and John Kongsgaard are natives of the region. John, who was formerly the winemaker for Newton Vineyards (where he helped to pioneer the creation of some of the first truly sophisticated Merlots to emerge from California), first planted vines in 1979 on eight acres that once served as a pasture for his grandfather; he sold this harvest to other wineries until 1996, when he released his first Chardonnay under his own label. Since then, he and his wife have added to their portfolio of releases a blend of Viognier and Roussanne, as well as a Syrah sourced from the Hudson Vineyard in Carneros. The total annual production for all three wines, including a special cuvée Chardonnay known as “The Judge,” is less than 1,000 cases, most of which, as a rule, sells out immediately to private collectors. The 2001 Chardonnay vintage proved no exception. Many have remarked that this wine, with each successive release, seems to improve uncannily; it would require a strenuous stretch of the imagination to conceive how this perfectly poised wine could be bettered. Its size and strength are obvious from the first nosing, but intricacy and intrigue more accurately describe the character of this Chardonnay, which is meant to be mused over. Like a 13th-century motet, various polyphonic texts—bracing granite mineral, fanfares of lemon and orange blossom, waves of summer smoke, and notes of jasmine—weave together rhythms and harmonies in a fascinating and sustained cadence of immaculately balanced acidity.

Vintners Daphne and Bart Araujo are stewards of one of the most extraordinary plots of land in California: the 38-acre parcel of land just east of Calistoga known as Eisele Vineyard. Planted more than 120 years ago with Riesling and Zinfandel vines, this oenological enclave enjoys the protection of a mountain ridge to the north, as well as cool Pacific influences flowing from the west that regulate temperatures. In 1990, the Araujos, recognizing its historic importance, not to mention its distinctive terroir, renovated and replanted the venerable property, replacing the existing vines primarily with Cabernet Sauvignon, Syrah, and Sauvignon Blanc—the basis for some of Napa’s most prized single-vineyard wines. The Araujo Estate Sauvignon Blanc Eisele Vineyard 2002 represents the ne plus ultra of American Bordeaux-style white wines. Blended from Sauvignon Musque, Sauvignon Blanc, and a touch of Viognier, this release exudes orange peel, honey, lemon wax, and a trace of rhubarb without the heavy stickiness that weighs down some wines; in fact, one feels as though one breathes rather than tastes this delicate white, which closes with a distinctive nuttiness and lightly mineral bite.

Growing Chardonnay in Rutherford rather resembles, to the untutored, planting a tropical rain forest in the Mojave Desert: The extreme warmth of the days and contrasting cool of the nights has for generations produced some of Napa’s most delightful and distinctive Cabernet Sauvignons, but one does not necessarily associate this appellation with Chardonnay, which generally demands more moderate, even conditions. Shari and Garen Staglin have, however, discovered in their 50-acre property an ideal oasis for this white varietal, and the grapes return the favor tenfold. The clear, crisp fruit flavors that define the bountiful Staglin Chardonnay Rutherford 2002 are carefully preserved in their transition from vineyard to winery: Whole-cluster pressing, barrel fermentation and gentle bâtonnage preserve the wine’s complex profile, which combines spicy poached pear and apple with honey, lemon curd, and soft sandalwood.

The Nickels family has supplied Napa Valley not only with several icons—the 19th-century stone winery at Far Niente and their inimitable Art Nouveau–style labels—but with an abundance of remarkably consistent fine wines. Far Niente’s Chardonnays have become standards on the lists of top restaurants worldwide, and the idiosyncratic and fascinating single-vineyard releases of Far Niente’s sister winery, Nickel & Nickel, offer collectors a taste journey through the region’s most unique terroirs. But the third sister in the family’s portfolio, Dolce, holds a special place: These Sauternes-style dessert wines drink like distilled sunlight in a glass. One Dolce release has taken this beauty even farther: the Dolce Saint Nicholas 1999, of which only 1,000 bottles were made. The wine’s name is that given by German winemakers to late-harvest wine that remains on the vine until the Feast of St. Nicholas in early December. Amber in color, this extraordinary release is surprisingly light in texture, yet richly flavored with candied orange and toasted almonds, lemon custard, and crème caramel.

There can be no question but that the entrance to Darioush Vineyards on Napa Valley’s Silverado Trail is one of the strangest sights to behold in that part of the world: In homage to proprietor Darioush Khaledi’s Persian ancestry, the winery’s entrance consists of a Cecil B. DeMille–inspired allée of Babylonian columns leading up to a temple of yellow travertine that would perhaps have impressed even Nebuchadnezzar. Inside, the ambience is that of a trendy New York club more than a tasting room, but then all things at Darioush run to extremes, including the saturated flavors of its wines. The 2003 Darioush Viognier Napa Valley possesses texture and flavors so concentrated, the wine almost suggests a honey made from the pollen of honeydew melon, jasmine, citrus blossom, and honeysuckle. Amazingly, this Rhone-style white is not especially sweet; rather, it pools luxuriously on the palate, then, like a summer raindrop, evaporates refreshingly.