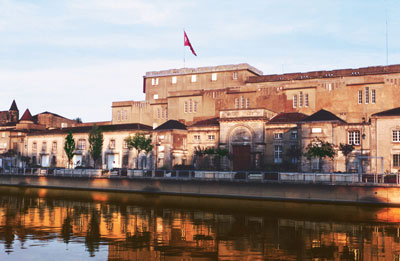 Yann Fillioux joined Hennessy in 1966 and trained alongside his uncle, Maurice, on a daily basis for 25 years until the elder retired. Such long apprenticeships are the norm at Hennessy, which presumes that a blender requires at least 10 years of tasting practice to evaluate, select, age, and blend the various eaux-de-vie that compose the Hennessy Cognacs.

Yann has been responsible for the releases of the prestigious Richard Hennessy and the limited editions of Hennessy Private Reserve 1873 and 1865. His most recent creation is Ellipse, a blend of seven historic eaux-de-vie, each selected by a different generation of the Fillioux family. Throughout the Fillioux tenure at Hennessy, each master blender noted the most exceptional vintage-dated eau-de-vie of his time: the 1830, 1848, 1875, 1932, 1947, 1972, and 1995. Hennessy Ellipse comprises these spirits in a masterful blend.

The elliptical shape of the Baccarat decanter, designed by Thomas Bastide, alludes to the rounded stones that one finds throughout the Cognac region’s vineyards. The decanter’s seven pontil marks (indentations the glassworker makes with his tool, called a punty rod, which holds the bottle in place while he is shaping it) represent the seven component eaux-de-vie and the seven generations of the Fillioux family who crafted them.

At a slightly greater-than-usual 43.5 percent alcohol, Ellipse nevertheless is disarmingly graceful and elegant in body, but its flavor is intense, with constantly shifting layers of vanilla, spice, and dried fruit. The presence of oak lends a subtle toasty taste without cloaking the spirit’s nearly eternal freshness.