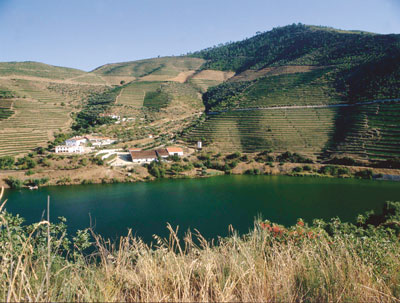 Early on, the folks at Taylor Fladgate expected that the 2003 harvest would yield a spectacular port. Winemaker David Guimaraens said that the year presented “textbook ripening conditions,” and chairman Alistair Robertson declared it “a perfect year in the vineyard: . . . a wet winter to build up water reserves, excellent flowering conditions, and plenty of heat and sunshine in the summer. All the ingredients for a great vintage port were there.” Nonetheless, the 314-year-old house held to its custom of waiting until April 23, 2005, St. George’s Day, to announce the harvest’s fate.

In the restrained tradition of Portugal’s Douro River valley, Taylor Fladgate declares a vintage only three times per decade, on average. When it does so, wines from its two top-ranking (and disparate) estates—Quinta de Vargellas and Quinta de Terra Feita—are blended together, producing a port of extraordinary complexity and interest. Taylor Fladgate describes Quinta de Vargellas, which yields much of the house’s vintage port, as the jewel in its crown. Taylor Fladgate acquired the property in the mid-1890s, and today more than half of its 225,000 vines are at least three-quarters of a century old. Its grapes provide the backbone of the 2003 release. Quinta de Terra Feita, located on the western slopes of the Upper Douro’s Pinhão River valley, contains 151 acres planted with 224,000 vines that produce more than 34,000 gallons of wine. Its fruit imparted depth and intensity to the 2003. Quinta do Junco, another Pinhão River valley property that Taylor Fladgate purchased in 1998, also contributed grapes to the blend.

The 2003 is deep, dark, and elegant, with lovely structure and a robe of pure berry fruit. Long and powerful, it promises a life span of many decades, making this bottle something to enjoy now or to cellar away.