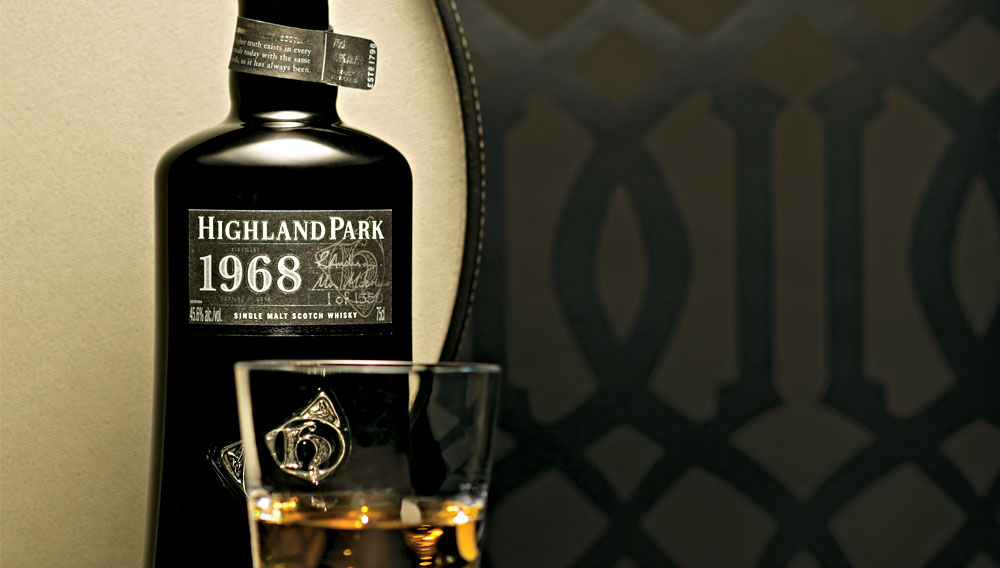 One of the greatest and richest single-malt whiskies in existence was created against one of the world’s starkest landscapes—a remote, windswept island in the Orkney archipelago. High­land Park, Scotland’s northernmost distillery, is the birthplace of the Orcadian Limited Edi­tion Series 1968 ($3,999), a 40-year-old single malt that expresses dramatically different aromas and tastes than the distillery’s previous offering of the same age, which was released a few years ago and distributed primarily in Europe.

This whisky’s individuality derives in part from the fact that the distillery, which was founded in 1798, still does its own floor malting. In addition, the peat used to dry the malted barley is cut from nearby Hobbister Moor; the absence of trees and abundance of heather in this area imbues the smoke produced by this fuel with distinctive floral characteristics that also permeate the spirit. Yet the most significant contribution to this whisky’s personality may come from the barrels in which it matured.

Eight of the most exceptional bourbon- and sherry-refill casks were selected for use in crafting this inaugural Orcadian limited edition; yet, after aging for a minimum of four decades in the distillery’s damp cellars, more than half of the original quantity of whisky had evaporated (often called “the angel’s share”). However, enough of this precious spirit remained to fill 1,550 bell-shaped black-glass bottles, a mere 100 of which have been allocated to the U.S. market. Each of these decanters is housed in an oak box decorated with a handcrafted silver Highland Park medallion and comes with a booklet that details the creation of this exceptional, amber-hued, 91.2-proof single malt.

The moment this whisky is poured, aromas of heather, cinnamon, and cedar fill the air. A sip reveals a cornucopia of flavors—honey, toasted cedar, violets, ginger—and a lengthy finish of black cherry and floral notes accompanied by a whiff of smoke.

This is the first of 10 Orcadian Limited Edition Series releases that Highland Park whisky maker Max McFarlane hopes to produce during the next five years—provided he can find a suitable number of cellared casks that have matured sufficiently to meet the already high standards set by this exquisite first release.