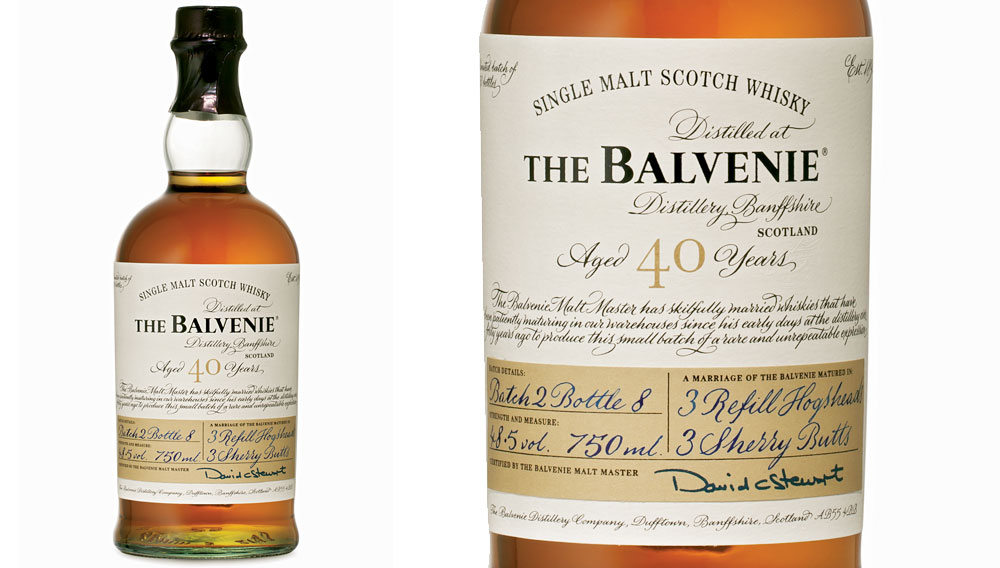 The Speyside Distillery owned by William Grant & Sons has released the second version of an incredible single malt: The Balvenie 40 Year Old Single Malt Scotch Whisky Batch Two (www.thebalvenie.com, $3,999). (The distillery is notable in that it grows its own barley, performs traditional floor maltings, and retains on-site coppersmiths to maintain the stills and coopers to repair the barrels.) The Balvenie’s first 40-year-old was released last year but was not exported to the United States; it was only available at duty-free shops. This time, 50 of only 150 hand-numbered bottles are destined for a few select retail shops in America. These trophies are worth the search, as the Balvenie’s malt master, David Stewart, achieved in this spirit a gently refined complexity by combining the contents of three American-oak refill hogsheads and three European-oak sherry butts. Although it is not as heavily sherried as Batch One, the sherry-like characteristics of this 97-proof whisky still predominate—though only slightly—over the candied smoothness of its delicate essences of violet petals, cedar, and buttered toffee. Each bottle comes in an oak presentation case handmade by Scottish craftsman Sam Chinnery and hand-engraved by his father, John. The family-owned distillery and its malt master have earned our admiration not only for creating such a memorable dram, but also for allowing such valuable inventory to age so gracefully.