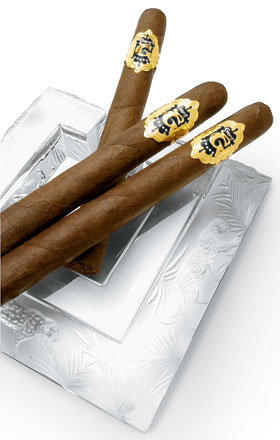 It stands to reason that Graycliff owner Enrico Garzaroli would create a cigar worthy of the acclaimed cuisine and wine cellar at his Nassau, Bahamas, resort. The Graycliff Espresso is the ultimate power smoke in more ways than one. While stronger-tasting cigars have become increasingly popular over the past few years, many manufacturers have sacrificed finesse in favor of potency. Given the vagaries of the volatile tobaccos used in developing these powerhouse cigars, it is a difficult balance to strike. Nevertheless, Garzaroli has managed to do so with the Espresso, sharing the credit with Graycliff’s Cuban master blender, Avelino Lara, who previously created cigars for Fidel Castro.

The Espresso has a Costa Rican wrapper, a leaf that is rough to the touch and coarse on the palate, and therefore not typically found in the smoothest-tasting cigars. “This is definitely not your typical Costa Rican–tasting tobacco,” says Garzaroli. In a research center near his Costa Rican farms, Garzaroli worked with Lara to develop a sterile and stronger hybrid of the legendary Cuban corojo seed. They combined this seed with a re-engineered Cuban Cameroon leaf, an Ecuadorian-grown ligero, and a Nicaraguan tobacco aged for six years. This hefty combination has been tempered by a flavorful touch of Philippine Simaba added to the filler.

The cigar, which is priced from $19 for a robusto (50 x 5¼) to $23 for a President (48 x 7¼) or a Pirate (52 x 6), can be likened to polished steel—refined yet sturdy. The flavor is pungent and chocolaty, with an added boost of caffeine. This is not a cigar for the uninitiated, but like its namesake, the Espresso is a sophisticated and powerful way to end the evening.

You never know what you are going to find when you purchase an old tobacco warehouse. Caribe Imported Cigars, makers of Camacho cigars, discovered a cigar manufacturer’s Holy Grail: pre-embargo Cuban leaf. In a dusty corner of a Lima, Ohio, warehouse, two bales of Cuban filler tobacco, having aged for more than 45 years, were found. Their pre-1961 pedigree exempted them from U.S. embargo restrictions.

With the leaf, Caribe created the Camacho Liberty, a cigar that can legally boast of possessing sweet, genuine Cuban tobacco in its filler. It is augmented with earthy Honduran tobaccos and finished with a Cuban-seed Honduran corojo wrapper. Caribe is producing only one shape this year, a 48 x 52 x 50 x 6 torpedo. Each cigar, priced at $16 apiece and packed 20 to a box, comes in a serial-numbered wooden case. Only 1,500 boxes are being released this June, and another 1,500 boxes are scheduled for release in December. The Camacho Liberty offers a rare legal opportunity to experience a hint of Havana tobacco in a cigar whose construction rivals that of many of Cuba’s top brands.

In tobacco fields and warehouses, workers often smoke cigars made of dark, roughly textured tobaccos that are inexpensive and easy to obtain. But in the factory offices and stateside headquarters, it is not unusual to see on-site managers and corporate executives request, for their personal humidors, cigars made with rosado wrappers.

This spicier-than-normal, reddish-brown leaf is both rare and costly and, until recently, had seldom been in sufficient supply to make it to retailers’ humidors. General Cigar, having grown enough seed and improved its production techniques in the San Agustin Valley of Honduras, is offering a limited production of the Partagas Spanish Rosado, priced at about $6 each. It is only fitting that the silky-veined rosado wrapper should be destined for the medium-heavy taste of Partagas. However, its Dominican, Mexican, and Honduran filler has been augmented with a Connecticut broadleaf binder to accent the sugary pepper of the wrapper. Any connoisseur will find the taste rewarding, regardless of whether he has ever been inside a cigar factory.

Originally known for its hearty Nicaraguan and Honduran blends, Indian Tabac cigars have often flown under the radar, but the company’s new Rocky Patel premium brand (named for the company’s president) is worthy of more notice.

The Indian Tabac Rocky Patel Vintage 1990 (priced from $6.50 each for a robusto to $8.75 each for a torpedo) is a smooth and creamy box-pressed blend of 7-year-old Dominican and 5-year-old Nicaraguan filler tobaccos spiced with a Mexican binder. But it is the stunning 12-year-old Honduran-grown broadleaf wrapper from the Talenga Valley—with an elegant look and texture rarely found in this leaf—that catches the eye and pleases the palate. The flavor balances on the border between medium and heavy, and demonstrates how extra aging can refine the taste of a normally rustic wrapper.

The name of the Ashton Heritage Puro Sol (“pure, or total, sunlight”) reflects the fact that all the tobaccos in this cigar have been sun-grown. The cigar (priced from $8.25 each for a corona gorda to $11 each for a double corona) also marks the first time that the Fuente family has agreed to part with some of its precious Meerapfel-grown West African Cameroon wrapper.

The late Rick Meerapfel resurrected the African Cameroon growing fields after the French abandoned the country in the early 1990s, and the Fuentes immediately recognized the value of this limited-production leaf. With the color of richly tanned leather, the 5-year-old wrapper bursts with medium-strength flavors of musty earth and spice, providing the perfect complement to the all-Dominican filler and binder.

In the boxes, the cigars are surrounded by Spanish cedar shavings, a technique used in Cuba years ago. This cedar enhancement imbues the cigar with a rich fragrance that is evident even before it is lit. And the aroma, construction, and taste are as notable as the packaging. The 5-year-old Cuban seed filler and binder are highlighted by a delicate Nicaraguan wrapper, which has been aged in 50-year-old oak barrels. This Cuban technique adds lemony-vanilla accents and brings the taste to a smooth plateau that lasts throughout a remarkably long finish.