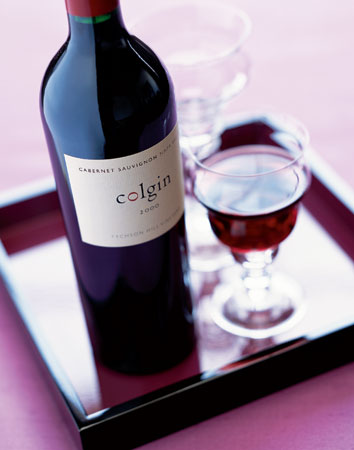 A legacy of enduring taste and beauty.

The pioneer spirit takes many forms, and pioneers themselves have many faces. One of Napa Valley’s most intrepid trailblazers bore rather delicate, refined features; yet these incidentals belied the determined heart that beat beneath. Josephine Marlin was a native of San Lorenzo, Calif., who married a Danish immigrant farmer by the name of John Tychson. The couple’s move to St. Helena in 1881 was, in part, inspired by their mutual dream of making wine in this sun-drenched setting, but also by a darker fact: John had contracted tuberculosis.

For $8,500, the couple bought 26 acres with a few vineyards planted, and together, they worked to expand the concern. But these healthful influences did not slow John’s decline, and he died before construction of the winery began. Josephine broke ground in 1886 on the modest building that would house Tychson cellars. The fledgling operation produced zinfandel, Riesling, and a blend that Josephine called “Burgundy” for eight years, after which she sold the winery. Eventually, the property was absorbed into what is now Freemark Abbey, but the original acreage, known as Tychson Hill, still bears the couple’s name, and Josephine remains the first woman ever to operate a winery in California.

Her legacy resonates in the careers of other gifted women who have followed her, but none more so than in Ann Colgin’s. Born in Texas and educated at Vanderbilt and New York University, Colgin worked at Sotheby’s as an art expert and antiquarian before founding Colgin Cellars in 1992. She combines taste, sensitivity, and a love of beauty with the determination that has enabled her to make her label one of the most sought after in America—qualities of which Josephine would no doubt have approved. Their spiritual kinship is reflected in Colgin’s painstaking restoration of the nearly collapsed Tychson farmhouse, which she and her husband, Joe Wender, rebuilt from the foundation up. Yet Colgin’s most fitting tribute to Josephine’s achievements can be found in the small vineyard that adjoins the house’s gardens, the first wine from which she released in October 2003.

The Tychson Hill Cabernet Sauvignon stands out for its compelling synthesis of strength and subtle harmonies. Despite difficult conditions in the 2000 vintage, the very best California producers (including Harlan Estate, Shafer Vineyards, and Sonoma’s Vérité) nevertheless created spectacular wines—a fact that merely underscores Colgin and winemaker Mark Aubert’s achievement. Tremendous yet balanced tannins provide the structure over which a bounty of flavors—black cherry, creamy vanilla, sprinklings of nutmeg, and wood-spice—unfurls like dark, rich, variegated vines. The experience lingers, lasts—but not as long as Colgin’s own contributions to Napa’s ever-evolving history will.

Perfection seems to have followed the career of Helen Turley, who has made wine for some of California’s most elite labels, including Bryant Family and Colgin. Her own label, however, which she established with her husband, John Wetlaufer, in 1990, represents something of a departure from the enological endeavors that have brought her so much renown—not in terms of its distinction, but in terms of its style.

While her efforts elsewhere have focused on large, lush Cabernet Sauvignons, at home, she has tirelessly pursued the perfection of Pinot Noir. Located out on the cool Sonoma Coast, where Williams Selyem has produced so many of its celebrated Pinots, the Marcassin Vineyard lies just under 4 miles from the ocean, lending to its wines an earthy, Burgundian character. The Marcassin Pinot Noir Sonoma Coast Marcassin Vineyard 1998 possesses an alluring color—dark, but with flashes of deep red—and a berry-filled nose so dense that one can almost taste it on the tongue. This fruit, however, is countered by a rich clay undertone, traces of ginger and wood, as well as toast. If Pinot had been made in paradise, it would have tasted like this.

Though the winery itself is of fairly recent origin (the first Merlot was planted just over a decade ago), this property in the rolling southeastern region of Washington state has flourished under the stewardship of the Corkrum family for more than a century. The vineyard remains a family concern: Shari Corkrum Derby and her husband, Dean Derby, direct the operation, while Dean’s brother, Gaynor, and son, Devin, manage

Even the finished wines bear the family stamp: The Cabernet Sauvignon is named Frederick, after Shari’s father, while the Syrah takes its name from her mother, Nina Lee. The Spring Valley Uriah Walla Walla Valley 2001 alludes to Shari’s grandfather, Uriah Corkrum, who, if he resembled this sturdy but polished wine, must have been a hearty but generous soul, full of life and confident of where he came from. Fabulously ripe with fruit, redolent of spice, this blend of Merlot, Cabernet Franc, and Petit Verdot enjoys a flavor finish as long as the Corkrum family line.

California’s Central Coast, which stretches roughly from San Simeon to Ventura, has always been an anomaly of sorts in the scheme of things Californian. It shares little with the teeming media-dominated megalopolis of Los Angeles, nor with the self-conscious sophistication cultivated in and around San Francisco’s Bay Area.

Sandwiched between these two interpretations of the Golden State, the people of the Central Coast have quietly pursued their own business—predominantly farming, fishing, the raising of cattle, and, now, the making of wine. In 1989, well before the Rhône varietals achieved their current vogue, John Alban was planting Roussanne, Grenache, and Syrah there, in the Edna Valley, near Arroyo Grande—an enterprise that has met with gratifying success. An outstanding example of his achievement can be found in the Alban Syrah Edna Valley Seymour’s Vineyard 2001, whose color is bouillon-dark, deeply concentrated, and powerfully aromatic. Beneath layers of wild berry, anise lurks, as well as a savory swell of cigar box, accompanied by a leathery bite.

Picnic in the Country

Zinfandel labors under the curse of California’s Cabernets, which have over the course of the last couple of decades largely shaped the red wine–drinking tastes of the American public.

Still, this rustic grape remains the quintessentially Californian varietal, whose origins were only recently discovered to be the vineyards of eastern Europe. The Rosenblum Cellars Zinfandel Sonoma County Cullinane Vineyard 2001 captures the restless spirit of this grape, whose combination of fruit and spice make the mouth water. Berries abound in every mouthful, as do essences of deep spice, sweetened coffee, and oak, yet the whole retains a true silkiness, despite its vigor. It would be difficult to conceive a more perfect wine for that picnic in the country.