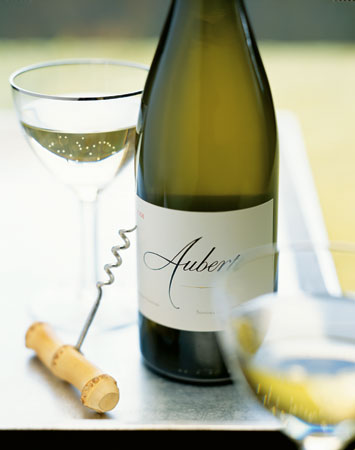 A virtuoso of the vine.

We strive in the very difficult task of selecting wines for these lists to be as ecumenical as possible. We attempt to compose a balanced list that takes into account varying tastes and the diverse characters of different regions. The mission is a daunting one; yet the quest for quality takes precedence over all other considerations, which will explain why, for the first time ever, wines from the same winemaker have been awarded top honors for both the domestic red and white categories.

No one who has sampled his work will doubt Mark Aubert’s astounding talent. After serving as enologist at Rutherford Hill, he became assistant winemaker to Helen Turley at Peter Michael Winery. The combination was a happy one: Under Turley’s tutelage, Sonoma-based Peter Michael emerged as one of the finest producers of Chardonnay and Pinot Noir outside the hallowed borders of Burgundy.

Moreover, the firm’s expertise was not confined to these varietals: Its Bordeaux-style red, Les Pavots, can hold its own against many of the best of neighboring Napa Valley. When Turley left Peter Michael, Aubert added to the winery’s existing advantages his own invaluable knowledge. Having grown up in St. Helena, he brought an intimate knowledge of the larger region’s microclimates and soils, extracting from some of the most exceptional Chardonnay vineyards available such classics as the Peter Michael Point Rouge 1997. In 1999, he took the position of winemaker at Colgin Cellars, where he once again replaced Turley.

Aubert’s versatility seems to manifest itself in all he does—from the assorted varietals he has perfected to his meticulous innovations for the new Colgin Cellars winery, where his imprint is felt everywhere, right down to the jazz music pumped into the barrel room. But nowhere is his resourcefulness more apparent than in the release of his own, small-production Chardonnay, which he created, along with his wife, Teresa, while managing the demands at Colgin and continuing to consult at Peter Michael. Made with fruit from the Sonoma Coast’s Ritchie Vineyard, this intense white is, in its own way, as generous with aromas and flavors as many of Aubert’s beautifully extracted reds are. Jasmine, honey, smoke, and hazelnut envelop one’s nose, as do citrus elements. The wine has a lovely, luxuriant texture that heightens its creaminess, which gives way to a lasting, appropriately mineral finish.

If zinfandel’s less-than-euphonic name and countrified character put it at a disadvantage in competing with Cabernet and Pinot Noir for the taste buds of red wine aficionados, then the American prejudice against sweet wines has been the downfall in this market of Riesling.

Though the long-winded nomenclature of Chateau Ste. Michelle Dr. Loosen Riesling Columbia Valley Eroica Single Berry Select 2001 might suggest a Teutonic provenance, this heroic white wine, in fact, is the result of a fruitful collaboration between Chateau Ste. Michelle winemaker Erik Olsen and Dr. Loosen, one of the premier estates in Mosel. A wine of regal lushness, the 2001 Eroica presents on the nose a veritable orchard of peach and apricot, followed by green apple and honey, the perfect touch of acid, and delicate minerals on the palate.

A Pleasure Worth Repeating

As we put pen to paper, we fear we are in danger of repeating ourselves: This marks the third consecutive year that we have honored this particular wine in these pages.

Yet the irresistible pull of Beringer Wine Master Ed Sbragia’s style of Chardonnay leaves us with no alternative but to list the Beringer Chardonnay Napa Valley Sbragia Limited Release 2001—though, fortunately, each new vintage does provide a fresh vocabulary for describing this hallmark wine. Few white wines could stand up under application of the wine critic’s cliché, “a meal in a glass,” but this one consistently does. The bouquet is as creamy as freshly cooled custard, while the lusciously textured first sip renders poached pears and dried fruit, followed by subtle smoke and refined mineral flavors. Sbragia has done it again.

Signature of a Master

Two years after Robert Mondavi opened the doors of his Oakville winery, the fledgling company made California wine history with the introduction of Fumé Blanc.

In the pastoral environs of Los Olivos, Calif., Tom Beckmen, founder of Roland Corp., has pursued an equally musical second career, discovering and combining melodies and harmonies of Rhône-style wines. His vineyard—a 365-acre tract in the hills above Santa Ynez Valley that Beckmen calls Purisima Mountain—is predominantly planted to Syrah, though Grenache, Mourvèdre, and other red varietals share the idyllic setting with small plantings of Sauvignon Blanc.

The Beckmen Sauvignon Blanc Santa Ynez Valley Purisima Mountain Vineyard 2001 comes from the first block of these grapes, whose soil is rich in limestone, which lends the finished wine its intense mineral character. The resulting composition is highly concentrated, weaving floral motifs among more pronounced chords of apple, pear, and herbal essence. Bass tones of oak anchor this graceful and intoxicating arrangement.

L’Ecole No. 41, located in Washington state’s Walla Walla Valley, has carved out a small, though (in enological terms) profound, niche in the production of Sémillon.

Harvested late and fermented in the barrel, this potent extract combines power with a miraculous lightness that enables it to evaporate on the tongue once its honeyed flavors have been deposited. The L’Ecole No. 41 Sémillon Washington Fries Vineyard Wahluke Slope 2001 is bright with citrus and fig, balanced by soft oak and spice undertones; its texture is smooth and sumptuous.