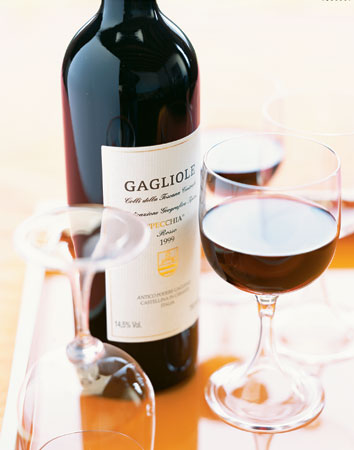 A rarity among reds.

Persistence pays off. Twenty years ago, Thomas Bär, a Zurich banker and attorney, and his wife, Monika, succumbed to the multiple charms of this hidden 110-acre estate just outside Castellina in Chianti. Their attachment to the place began with its history, with records dating to the 10th century, when the Longobard king Berengarius owned it and bequeathed it to his son. Then there were the rows of tall Italian cypresses, swaying gently in the breeze as they led into the vineyard. The view across the primordially beautiful Tuscan landscape, which looked just as it had for many centuries, with the towers of San Gimignano visible in the distance, also drew them in. “Monika and I fell in love with this property,” Bär says.

Unfortunately, the owner at the time did not wish to sell, and 10 years passed before the Bärs could convince him to do so. But, once the deed was signed, the Bärs’ headache had only just begun. They had to contend with the Italian government, since Gagliole is a protected landmark, and the Italian bureaucracy is, well, Italian. Under this burden of red tape, the Bärs worked for 10 years to renovate Gagliole from foundation to ceilings, while at the same time preserving the historic look and ambience of the place.

Rustic and entirely Tuscan from the outside, the buildings artfully conceal a small state-of-the-art winery with temperature-controlled upright fermenting tanks of Austrian oak and a barrel room stacked with crisp, new French barriques. The terraced vineyards, totaling 22 acres, are planted with 80 percent Sangiovese, 10 percent Cabernet Sauvignon, and small amounts of Malvasia, Chardonnay, and Trebbiano. Olive trees are scattered among the vines.

The Bärs make a modicum of white wine as Gagliole Bianco, but the estate’s flagship wine, simply called Gagliole, is a deep, powerful, and extraordinary red made mostly from Sangiovese blended with a small percentage of Cabernet. The first release was from the 1993 vintage, but Gagliole really hit its stride in the 1999 and 2000 vintages. A step up even from Gagliole, this extraordinary Pecchia is a one-off from the 1999 vintage—a 100 percent Sangiovese, and one of the greatest Tuscan wines we have ever tasted. Unfortunately, Bär has no immediate plans to produce it again, making it a rarity among rarities. Racy and intense, it is a pure explosion of blackberry and plum with a core of searing, juicy acidity and notes of smoke, spice, and wildflowers. A masterpiece worth the search.

Since immensely talented winemaker Jacques Grange took over its day-to-day operation in 1997, Delas has rocketed onto the A-list of Rhône producers and is now mentioned regularly alongside such venerable names as Guigal, Rostaing, and Chapoutier.

The Delas Frères Côte Rôtie La Landonne 1999 represents a relatively new addition to the Delas lineup. The 1999 offering was vinified at the firm’s sleek new gravity-flow cuverie and given a full-tilt Grange regime of cold maceration, cap punching, and in-cask malolactic fermentation. This is pure Syrah—and a massive one at that. An aromatic coffee component plays around elements of deep black fruit, anise, and gravelly minerals, all hitching a ride on the wine’s hedonistic, nearly carnal texture.

Named for the Latin poet and vintner Ausonius, who lived nearby in the fourth century, Ausone provides one of contemporary Bordeaux’s most successful turnaround stories.

After producing rather dull, listless wines during much of this century, Ausone has been revitalized by current owner Alain Vauthier with help from peripatetic consulting enologist Michel Rolland. Today’s Ausone offerings should rank very near the top of any Bordeaux enthusiast’s shopping list. The wines are tightly wound and more tannic than those of other St.-Emilion properties, but still deliver a stunning breadth of fruit and amazing verve. Like most recent vintages of Ausone, the Château Ausone St.-Emilion 2001 is clean and modern in style and will last easily into the mid-century.

Torbreck is a relatively new player on the Aussie scene, celebrating only its 10th anniversary this year. Through a share-farming arrangement, owner-winemaker David Powell sources old-vine Rhône varieties from various vineyard plots, then crafts them into rich, highly extracted wines produced in preciously small quantities.

Torbreck Shiraz Run Rig Barossa Valley 2001 comes from vines up to 140 years old. (Powell, who worked as a lumberjack in Scotland, gives most of his wines Scottish names; Run Rig refers to the system by which Highlands clans divide their land.) Four percent Viognier lends an aromatic perfume to this exceptional newcomer.

Port merchant extraordinaire Rupert Symington and his family now control the Graham’s brand, but the house dates to 1820, when two Scottish textile merchants in Oporto, Portugal, accepted 27 pipes of port in payment for a debt.

Shipped back to Glasgow, the stuff proved so popular that the merchants decided to go into the wine business. The W. & J. Graham’s 40 Year Old Tawny Port is the firm’s flagship fortified wine, yielding a gorgeous honey-orange-amber robe of color and racy, vibrant flavors of tropical fruit. The lengthy finish exhibits a thrilling flash of exotic spice and a beautifully modulated rancio.

Bruno and Marcello Ceretto transformed their father’s small wine agency into one of the most important contemporary producers in the prized region of Piedmont, Italy, by accumulating a portfolio of prime estate properties throughout the Langhe and hiring top-notch architects to design facilities at each.

In large part responsible for transforming modern perceptions of Barolo by freeing it from hidebound tradition and setting its course for the future with a clean, modern, fruit-driven style, Ceretto is now being passed to the third generation, Bruno and Marcello’s four children, who promise to keep the company on the cutting edge of winemaking. The Bricco Rocche estate in Barolo takes its name from the property’s most significant vineyard. The Ceretto Barolo Bricco Rocche 2000 is luscious and complete, with a floral note, potent spice, and deep berry fruit.