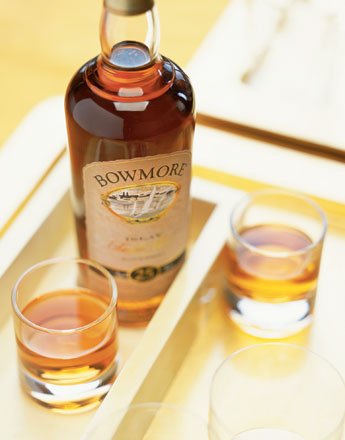 A magnanimous malt from the oldest distillery on Islay.

Scotch lovers tend to gravitate toward Islay the way Ferrari enthusiasts are drawn to Maranello, or ardent surfers make the pilgrimage to Oahu’s North Shore. Islay (pronounced “eye-lah”) malts are entirely individualistic, sometimes difficult, and always as rewarding to drink as a Challenge Stradale is to drive, or a tube coming off the Banzai Pipeline is to ride.

Founded in 1779, Bowmore is the oldest surviving distillery on Islay. As affluent Japanese businessmen began to tilt back Bowmore malts with their sushi during the Asian economic boom of the 1980s, beverage giant Suntory purchased a share of the company, eventually acquiring the Morrison Bowmore distillery outright in 1994. There is nothing Japanese, however, about the product itself—as pure an expression of Scotland as fresh loch trout.

Peat covers one-quarter of Islay, and one of the qualities most appreciated in Islay malts is peat reek, which lends its distinctive smokiness to the grain. Bowmore, in fact, owns its own peat bog, and the water used in its whiskies rises through the island’s peat and travels to the distillery via a 9-mile-long watercourse. Bowmore also stands as one of the few distilleries to maintain its own malting floor, which produces about a third of its malt requirements.

Like other Islay distilleries, Bowmore’s identity and routines are intimately bound to the sea, situated, as the distillery is, on the inner curve of the crescent-shaped island. Some of Bowmore’s original cellars lie below sea level, and 5-foot waves lash the distillery wall at high tide. These factors certainly contribute to Bowmore’s typical Islay sea-wrack and brine flavors, but these essences actually count among the least cantankerous from Islay malts. Neither overly assertive nor overly refined, these whiskies retain a certain mystique all their own—a mystique that contributes much to making them some of the world’s most desirable single malts.

This recent release contains a relatively new vatting of the Bowmore 25 Year Old, incorporating some 25- to 30-year-old whiskies distilled in the 1970s and matured in first-fill and refill sherry butts. Because of the sherry influence, this bottling remains significantly rounder than some previous editions. Bowmore promises that this fuller style will be maintained in future vattings. Fleshy and honeyed, its flavors of smoke and caramel coat the palate and glide into a long, delectable finish.

Recall the rare books room of your college library—the hush of Oushak carpets and the scholarly scent of tooled leather, the sheen of French polish on mahogany reading tables and the dim sunlight filtered through heavy draperies. Such hallowed chambers give you the impression that you are unworthy to even enter there.

The Macallan Fine and Rare Collection evokes the same feeling. Macallan’s release of 10,000 bottles spanning 116 years and costing from $750 to $38,000 each (cumulative value: $20 million) is a whisky lover’s dream come true. The collection includes five ultrarare 19th-century vintages, malts distilled in the 1930s and bottled in the ’70s, as well as vintages from 1945 to 1972. It was the Macallan 1952 that struck us most profoundly with its gingery spice, brilliant dried fruit notes, and gorgeous, ever-expanding layers of oak.

Centuries in Every Sip

Hennessy Cognac “Richard Hennessy,” the prestigious firm’s flagship brandy, is a tribute to its founder, Irishman Richard Hennessy, who began shipping cognac in the mid-18th century.

This stunner is composed (a musical metaphor is not out of place) from more than 100 individual eaux-de-vie culled from the Hennessy family vault, the contents of which date back eight well-aged generations. Some of the components are up to 200 years old—which means your lips may conceivably touch specific brandies that were distilled as the Battle of Waterloo was being waged. Dense, complex, and rich, it is velvety and alternately spicy-sweet with delightfully expressive fruit and toasty wood and smoke tones. Fittingly, the product is packaged in a vine-etched Baccarat or St. Louis crystal decanter.

Purportedly stolen by Spanish conquistadors in the 16th century and taken north, the recipe for AsomBroso Añejo tequila was excavated several years ago in an archaeological dig in California and deciphered from the original Aztec with the help of linguists.

When the intrepid discoverers traveled to Mexico to ask permission from the ancient gods to “revive” the spirit, a midnight rainbow appeared, signaling approval. Believe whatever part of this Hollywood-inspired legend you like, but the tequila is truly superb, with mellow caramel and spice notes galore.

Calling for Calvados at the latest hip nightspot usually draws a blank stare from the tattooed bartender. These apple brandies from Normandy are far from trendy, and sometimes one gets the distinct impression that the Normans wish to keep it that way.

As with grapevines, low-yielding trees generally produce the best apples. During the 1960s and 1970s, Christian Drouin amassed stocks of artisanal Calvados from local growers, many of which he now makes available in the Coeur de Lion vintage portfolio. The satiny Coeur de Lion Calvados 1963 combines ripe apple and subtle mushroom notes with a lingering finish.

The Matusalem brand dates to 1872 and was a favorite rum of Hemingway during his Cuban years. But, like so much else, the company’s history was fractured by Castro’s revolution.

An exodus to Florida and subsequent family squabbles caused the brand to languish in limbo for several decades. Just a couple of years ago, Claudio Álvarez, a medical doctor and great-grandson of the founder, relaunched Matusalem (now produced in the Dominican Republic) to an enthusiastic reception. The Matusalem Gran Reserva boasts a heady molasses nose with beautifully contoured flavors and a silken finish.

Taking Vodka to a New Level

Flashy new vodkas seem to appear faster than runway models at a Fashion Week couture show, and many of them are just as tastelessly clad. Once in a while, however, a genuine class act shows up amid the riffraff.

Level Vodka is the new entry from Vin & Sprit, the Swedish company that produces Absolut. Made from the same winter wheat as Absolut, Level receives a two-process distillation (continuous and batch), which emphasizes its subtle fruit-and-spice character. Thick and ripe, it flows across the palate, leaving a full spectrum of flavor and disappearing, ever so slowly, into a hauntingly delicious finish.