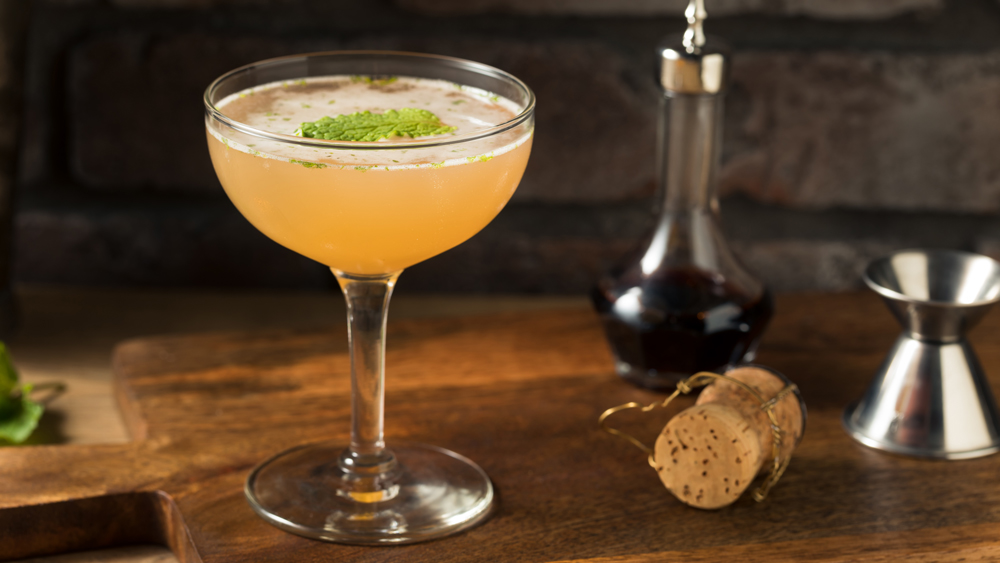 The Old Cuban is not what it appears to be.

For one thing, it’s not particularly old, and nor, for that matter, is it Cuban (though, I’m sure you’d agree, naming a cocktail the “Teenage Puerto Rican” is unacceptable on every level). Beyond the name, though, there’s the question of its soul, of what it is. Almost everyone refers to it as a mash-up between a Mojito and a French 75. And on paper that seems pretty right, but experientially, I’d argue that the Old Cuban has very little to do with either of them.

The cocktail was invented somewhere in the early 2000s by Audrey Saunders, most famous as the owner of the legendary Pegu Club in SoHo, one of the early pioneers of our little mixology renaissance. These days, measuring your cocktails and using fresh juice is the minimum acceptable standard—to brag about it would be like bragging that you brush your teeth every single day—but at the time, it was a revelation. Saunders created some of the earliest of what we now refer to as the neo-classics, the first cocktails with any real staying power beyond a particular season’s menu. She was known for meticulously workshopping her drinks, making subtle tweaks to classic cocktails and testing dozens of variations until the flavors lined up just so.

The Old Cuban is the product of such experiments and perhaps her most famous. She started with a Mojito, essentially: rum, lime, sugar, mint and sparkling water. She darkened it with a couple dashes of aromatic bitters, the spice-heavy stalwart typically used in Old Fashioneds and Manhattans, which gave it a heavy cinnamon-clove complexity. Some people do this to their Mojitos, so we’re not in uncharted territory here, but the next two decisions are what make it an Old Cuban—her choice to trade out the soda water for Champagne is very often cited as the one that makes it what it is (and what inspires the endless French 75 comparisons), but I don’t think so. I think the true genius move, and what inspired her to call it an Old Cuban instead of the working title of “El Cubano,” was to use aged rum instead of white rum.

This may sound like a trivial distinction. It is not. Both the French 75 and the Mojito are fresh and radiant—the former is bright exuberance, a firework contained in a glass, and the latter is practically made of sunshine. Not so with the Old Cuban. The Old Cuban is darker, more complex, a meditative and ultimately more seductive drink. The bitters add spice and texture, and it’s the aged rum, round and redolent with vanilla and oak, that moves it from poolside to inside, as if under a slowly twisting ceiling fan in a smoky room, long narrow beams of light through the wooden shutters. It’s still festive with Champagne but not extravagantly so; it’s not in sequins, it’s in a long slinky dress, like a dame in a noir film, not looking for trouble but trouble always manages to find it.

Honestly, it feels old, and Cuban, even if, as it turns out, it’s neither of those things.

Add all ingredients except wine to a cocktail shaker with ice, shake well for 10 to 12 seconds and strain into a flute or stemmed cocktail glass. Top with wine and garnish with a mint leaf or sprig.

Aged Rum: Saunders actually built this cocktail for Bacardi 8, an aged Puerto Rican rum that was once Cuban (hence the name) and which, coming as it does from one of the biggest liquor companies in the world, is neither expensive nor difficult to find. Other rums will also be good—what’s important here is that it be aged, so it’ll have some color and not be too old: 4 to 8 years is the sweet spot (older works OK, but the finish gets over-woody).

What won’t work as well are “Spiced” rums (Captain Morgan, Sailor Jerry, Kraken, etc) which infuse their rums not just with supplemental spices like vanilla and cinnamon but also a decent amount of sugar. It won’t be awful with these but that’s definitely not the best application. If that’s all you can get, use a little less simple syrup, as spiced rum comes with its own sweetness.

Simple Syrup: Equal parts, sugar and water, and stir until the sugar dissolves. Hot water will make the sugar dissolve faster, but room temperature water is fine. Keep in the fridge once mixed and it should last about a month.

Saunders’ original recipe called for 1 oz. instead of 0.75 oz.—a few of the early cocktail books skewed a touch sweeter than most of us do now, so I’d say to start with less, and then work your way up as needed.

Sparking Wine: As we’ve mentioned in this space before, actual French Champagne is the best way to make this drink as good as it can be made. If you don’t want to devote any of your best bubbly to a cocktail, a nice second place would be a Crémant, also from France, made by the same method but aged in the bottle for less time with a commensurately lower cost. Also good and less expensive still would be Cava, a traditional method sparkler from Spain.

As for Prosecco and the cheaper end of American sparkling wine… I’m not saying to not make this drink with them, but both will lack the depth of the traditional method sparkling wines, and so will play against the richer nature of the drink. It’s only 2 oz. or so of wine so we’re talking about 5 to 10 percent of a flavor difference, but if you were out to make the best cocktails you could, I’d advise the Champagne, Crémant or Cava.

Bitters: the natural choice is Angostura Bitters, so ubiquitous that even bartenders will refer to them as “regular bitters,” but Angostura is just one of several brands of aromatic bitters, even if it does utterly dominate the industry.

I mention this only because it’s worth noting that another early figure in the cocktail revival, instructional video maker Robert Hess, was, like everyone else, making Old Cubans with Angostura Bitters in 2009. Then, as it turns out, he married Audrey Saunders in 2011, and when he shot another video on the Old Cuban in 2015, he used a different brand, Bitter Truth Aromatic Bitters. I haven’t tried this personally, but knowing Saunders’s reputation and her eye for detail, one suspects there might be something to that, if you can find them.