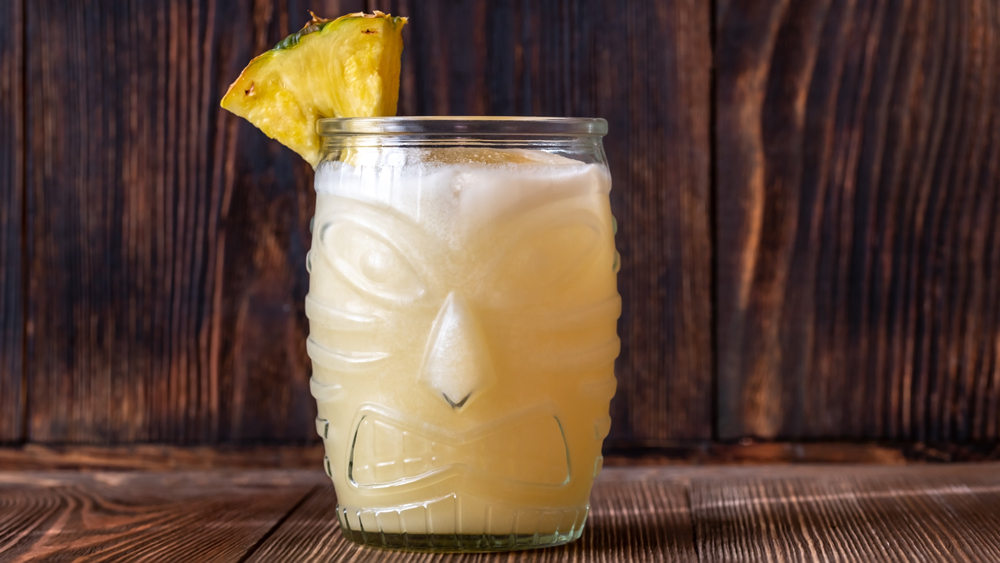 Well, that’s not exactly right. Painkillers can be pretty good, it’s the Painkiller™ that isn’t a particularly good drink. To explain:

The Painkiller is a classic Tiki drink, invented by a bartender named Daphne Henderson in the ’70s at the Soggy Dollar Bar, which sits now, as it did then, on the south-eastern coast of the island of Jost Van Dyke in the British Virgin Islands. The bar was so named because there’s no dock, so thirsty sailors-by would have to toss anchor, jump overboard and wade to shore, sidling up to the sandy six-seat bar with a pocket of wet bills and a mind to spend them on rum.

One of those sidlers was Charles Tobias. Tobias is a Canadian born former aviator and entrepreneur who was trained as an engineer and flew planes in Vietnam, then after the war started an electronics company, ultimately selling his enterprise for a small fortune. Now a very rich man, he took to the seas for five years, sailing around the world on a 60-ft. ketch with a human crew of four, in addition to a chimpanzee named Tommy and a cheetah named Fifi (seriously). Then, his next business idea: A run-in with a British warship inspired him, in 1979, to resurrect the particular type of rum that the Royal Navy used to ration to their sailors. He called it what the sailors had called it, “Pusser’s,” a derivation of “Purser’s” who was the person on the ship who would administer the rum to the sailors.

So anyway, he owns this rum brand, he’s drinking a lot of Painkillers on this beach, and he keeps asking Daphne Henderson what’s in it and she keeps refusing to tell him. So one day, in the words of Pusser’s themselves, “Tobias somehow managed to get one of her concoctions back through the surf and over the gunwale into his boat… there we went to work trying to match her flavor as closely as possible with his own recipe.” Having performed this bit of espionage to reverse engineer her creation, he then went back to the bar and compared his to hers, and to hear him tell it, everyone preferred his, with his Pusser’s Rum.

He heavily promoted the Pusser’s Painkiller. Undeterred by the fact that he didn’t invent this drink, he trademarked it, even going so far as to threaten litigation in 2011 against a cocktail bar called Painkiller in New York City (much was made of this incident and I won’t relitigate it here—suffice to say they settled out of court and the bar surrendered its website and became PKNY). Trademarked cocktails are exceptionally unusual in this industry, where the free exchange of ideas is considered fairly sacrosanct, and Pusser’s experienced a significant pushback from bartenders, which is one of the reasons you’ve probably never heard of it. Nonetheless, there it is: the Painkiller™ is two ounces of Pusser’s Rum, four of pineapple juice, and one each of cream of coconut and orange juice. One says otherwise at their own risk.

So how does it taste? Well, that depends on where you are. If you’re on Jost Van Dyke in the British Virgin Islands, listening to the waves lap into White Bay at the Soggy Dollar, sitting on a barstool with your feet in the sand, it tastes pretty damn good. Anywhere else, and it depends on the ingredients.

The Painkiller™ is fine. It’s not bad. What perhaps you’ve already noticed is that it lacks lemon or lime juice, which means it lacks the dynamic tension of something like a Mai Tai or a Daiquiri. Most shaken drinks work on the principle of very tart (lemon or lime) pulling against very sweet (syrup or liqueur), a tension which makes it bright and interesting. While pineapple and orange juice have acidity, it’s nowhere near the quantity that we’re used to in drinks, so the Painkiller runs the perennial risk of being flabby and honestly a little dull. Most modern cocktail books, including the everything-rum-and-Tiki Smuggler’s Cove book, don’t even mention it.

But if we want to make Painkillers, there’s two ways to fix it. The first is that we could invite acid to the party—lime is already friends with everyone here anyway. The best variation I’ve ever had is at a Tiki bar called The Grass Skirt in San Diego, which also incorporates the bright electric tartness of passionfruit to shock the whole thing to life. At this point, howeve—adding two additional ingredients to a four-ingredient drink—is it even a Painkiller anymore? Not really.

To preserve the essence of the drink but make it as good as it can be, what you need is a compelling rum. The right rum can save it from itself. It’s not like Pusser’s doesn’t work—there’s some Guyana rum in the blend that gives it a deep richness that shines through—but to my palate, I want more character, either Jamaican or all Guyanese (more on that below). Now, if you’re using a different rum, is it a Painkiller™? Unfortunately not. But it is a great drink. Choose your own adventure.

Shake on crushed or cracked ice for 4 to 6 seconds and dump contents into a tall glass or tiki mug. Top with more crushed ice. Garnish with a grind of nutmeg if you have it, or a slice or orange, or pineapple leaves, or all three.

RUM: The big question. Pusser’s got so much blowback for suing Painkiller NYC, and Tobias in interviews seems like an interesting guy who led a cool life, and I take no pleasure in badmouthing anyone’s brand. If you can get Pusser’s rum, make Painkillers™ with it and pretend you’re on Jost Van Dyke, watching an array of gleaming white boats silently bob up and down in the shimmering blue-green bay.

That being said, if I were to take these flavors and use the best rum I could for it, I’d go Jamaican. Jamaican rum has a signature funk to it that can be off putting in some drinks and absolutely incredible in others. This is one of those others—a brand like Plantation Xayamaca, Dr. Bird, or if you’re feeling punchy, the 57 percent ABV Smith and Cross will bring all the character you need to this drink and really make it shine.

If you hate that flavor, or just want to mix it up, go deep with Guyanese Rum. The Hamilton 86 Demerara Rum or El Dorado 12 Year have a brown sugar depth that will resonate out of here.

Orange Juice: Needs to be fresh. It’s not hard to either find or juice oranges, and fresh OJ is roughly a hundred million times better than the bottled stuff.

Pineapple Juice: Doesn’t need to be fresh. It’ll taste better if it is, but cans of Dole or whatever are fine. Just make sure you shake them before you open, there’s a bunch of sediment that settles and you want it mixed before you start mixing.

Cream of Coconut: Despite it’s ridiculous label and the fact that it has about seven too many ingredients (Polysorbate 60, Sorbitan Monosterate, Locust Bean Gum, etc, etc, etc), Coco Lopez is a perfectly acceptable product if all we care about is taste. I believe Coco Reàl is comparable, though I admit I’ve never had it. If you can’t be bothered to make your own, either will work here.

Making your own isn’t hard. There’s lots of recipes online, and basically it’s a can of Coconut Cream and the same amount of simple syrup, with a pinch of salt. If you’re making more than a few at a time, try it out.