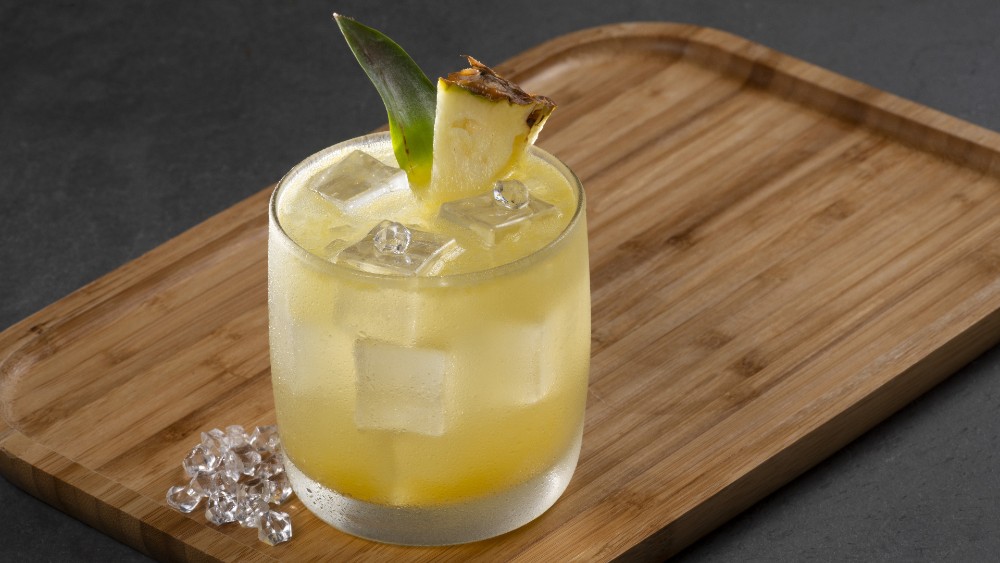 Everybody knows what the Piña Colada is for.

Imagine you’ve got one now. The glass is cold in your hand, the slush already turning liquid around the rim, a tall straw emerging beyond a few colorful garnishes. You take a sip, and get sweet, creamy, and strong, in that order. Now, where are you? And what are you wearing? Everyone’s answer is always the same. The Piña Colada isn’t for a vacation, it is a vacation. That’s why it smells like sunscreen, or rather, sunscreen smells like it: It’s transportive. You could be in Winnipeg, but start drinking a Piña Colada, and for those 10 minutes, you’ll hear waves gently lapping on a white sandy shore.

In Puerto Rico, there’s a tiny colorful island right off the north coast of the capital called Isleta de San Juan, on the western end of which is a restaurant called Barrachina. A marble plaque out front that reads, “The house where in 1963 the Piña Colada was created by Don Ramon Portas Mingot.” People flock in great numbers to this restaurant to try the “original” Piña Colada, and the creation story is repeated on their colorful menu, on the website and by the bartenders who work there about a hundred times a day. Which all seems simple enough.

It is complicated, slightly, by the fact that if you were to walk out the front door of that restaurant and head about about two miles east to the other tip of this little island, you’d find the Caribe Hilton, “The Birthplace of the Piña Colada” they’ll tell you, with ample literature and black and white photographs asserting that it was Ramón “Monchito” Marrero who developed the recipe there, in fact, in 1954. This, in turn, is complicated still by an article in the New York Times from April 16, 1950, four years before, in which the author talks about what to eat and drink in the Caribbean: “Drinks in the West Indies” she writes, “range from Martinique’s famous rum punch to Cuba’s piña colada (rum, pineapple and coconut milk).” Or perhaps it was the early 19th century pirate Roberto Cofresi, who, according to legend, wanted to “breathe courage” into his men by dosing them with a concoction of his own design, made of coconut, pineapple, and rum?

One begs forgiveness for finding the history uncompelling. Who had the bright idea to combine rum, coconut, and pineapple? Probably all of them, and many more. These things both grow together and go together, and it is, with respect to these gentlemen of history, a fairly obvious combination of flavors. It is worth noting, though, that what makes a Piña Colada a Piña Colada is not just coconut but the sweetened Cream of Coconut, the production of which was invented as Coco Lopez in the late ’40s in Puerto Rico, a time and place that lends authenticity to the Mr. “Monchito’s” claim. Indeed, if you had to pick one, the Caribe Hilton’s has governmental endorsement: In 2004, the Governor of Puerto Rico presented the hotel with a proclamation celebrating the cocktail’s 50th anniversary.

Whoever made it, the other thing everyone knows about the Piña Colada is that it’s an exceptionally charming drink. It’s the cocktail equivalent of the guy at the bar wearing a Hawaiian shirt who keeps trying to strike up conversations with everyone, and whom you end up liking despite yourself. There’s no pretension in the Piña Colada, because trying to take yourself super seriously while making a Piña Colada would be both hilarious and absurd. It’s a crowd pleaser, practically a milkshake — even bad ones are pretty good, and good ones are phenomenal. Indulging in a Piña Colada is by far the cheapest, easiest, and under the circumstances, safest way to take a vacation. Treat yourself to a beach, wherever you might be.

If using pebble ice: Add all ingredients to a cocktail shaker with a handful of pebble ice, and “whip” to mix everything together. Dump contents into a festive glass and pack in as much more ice as will fit.

If using a blender: Add liquid ingredients and about 6-8oz ice to a blender, and blend on high for about 10 seconds. Empty into a festive glass.

In both cases, garnish with pineapple leaves, an orange slice, and a little colorful umbrella, if you’ve got it.

Rum: The classic calls for white rum, or occasionally you’ll get someone insisting on Puerto Rican rum for the Puerto Rican cocktail, and both choices are just fine — anodyne, perhaps, but still quite good. In my opinion, though, never has a cocktail so benefitted from a rich, deeply flavored, English-style aged rum. If I could pick any single bottle, it would be the Hamilton 86-proof Demerara Rum, from Guyana. That might be a little niche depending on the market—if you can’t find it, aged products from El Dorado, the 8 or 12 year in particular, would be wonderful. If you really want to get precious with it, it also greatly benefits with a half ounce of funky Jamaican rum either subbed into part of the Guyanese rum or just added to it in addition, depending on what kind of a party you’re trying to have.

Lime Juice: Use 0.25-0.5oz lime juice, depending on your preferred tartness level. The classic recipe omits lime, and many modern ones follow suit. I don’t know what to say about that. Maybe their pineapples are less ripe than mine, or more acidic? I don’t know. To me, making this drink without lime juice is insane. Lime not only goes perfectly with all these flavors but helps to fight what is otherwise obviously too much sweetness.

Pineapple Juice: It’s not vital that your pineapple juice be fresh, but it makes the drink significantly better. I wouldn’t drink, say, a Daiquiri without fresh lime juice, but you can make dynamite Piña Coladas with cans of pineapple juice, so while it’s worth the effort, don’t sweat it if you can’t get the fresh stuff.

Cream of Coconut: As mentioned, the original Cream of Coconut is Coco Lopez, the canned, artificial looking goo with about seven too many ingredients and a label it looks like they haven’t changed since the ’40s. Every mixological impulse one has says to not use this stuff, and yet—try it side by side with a coconut syrup made from unsweetened organic coconut milk and organic evaporated cane sugar, and Coco Lopez wins every time. There’s a persistence to the flavor that’s difficult to beat.

What to do? Well, you could just use Coco Lopez, which makes a great drink. Darcy O’Neil does the DIY version with some coconut powder, which he says intensifies the coconut flavor. Bars where I’ve worked have added simple syrup and sweetened condensed milk (2:2:1 Coco Lopez to Simple to Milk) which is pretty damn good. I hear great things about scraping and blending coconut meat from an actual coconut, though it isn’t really feasible for most people. In my trials, what came out on top was a trick I picked up from the Death & Co guys in the truly excellent Cocktail Codex, which is to mix 4 parts Coco Lopez to 1 part unsweetened coconut cream. It’s got that trademark sunscreen tropical intensity of the Coco Lopez, tempered with the natural midtones from real coconut. Fantastic.

Ice (Blending vs. Shaking): If you’ve got crushed pebble ice, feel free to shake. If you don’t but want to get some, you can pulse your freezer ice in a food processor or blender, wrap it in a dishtowel and smash it with something, or go buy some at a Sonic or your local ice company. Otherwise, blend—the cocktail needs a good healthy amount of dilution to pull off its transporting magic.