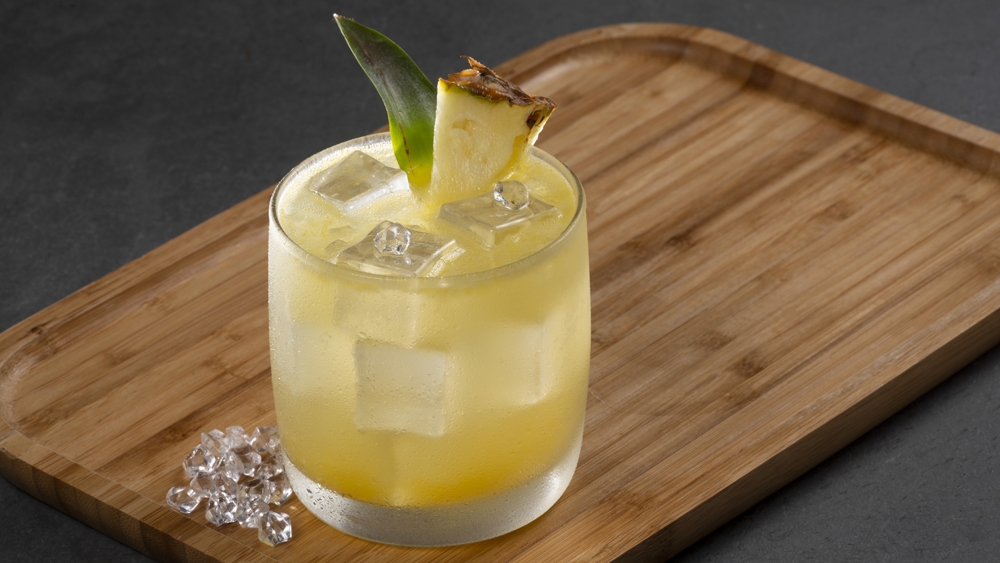 In 1889, the English author and journalist Rudyard Kipling toured America and wrote a series of essays about his experience, bound and published under the title From Sea to Sea. His chapter about San Francisco is, to put it mildly, unkind. Between critiques of our politics and an anecdote in which he apparently witnesses a murder, he makes sure to carve out space to hit San Francisco where it hurts: It’s eating and drinking culture.

There’s some prissy rhetorical musings (“Why people who in most cases cannot hold their liquor should play with it so recklessly I leave to others to decide”) and some bourgeois judgement (“the American does not drink at meals as a sensible man should. Indeed, he has no meals. He stuffs for ten minutes thrice a day”) but right there in the middle, lonely praise in a sea of insults, is a description of a cocktail that impressed him while he was there, what he called “the highest and noblest product of the age.” He reports, “no man but one knows what is in it. I have a theory that it is compounded of the shavings of cherubs’ wings, the glory of a tropical dawn, the red clouds of sunset and the fragments of lost epics by dead masters.”

And what is this magic cocktail of which he speaks, liquid gold in late 1800s San Francisco? Is it a Cognac sour? A Mint Julep? A Sazerac? No, the cocktail he was raving about is the same cocktail all travelers to San Francisco had been raving about since the late 1850s, the unlikely and delicious combination of Peruvian grape brandy and pineapples called the Pisco Punch.

At first blush, 1850s San Francisco seems like a strange place to find something as exotic as pisco, a spirit that, frankly, is considered exotic by many Americans in 2021. As a frontier mining town, it seems like the kind of place you’d buy an unlabeled bottle of whiskey with a single heavy coin, To understand the connection, you have to appreciate how explosively wealthy a town San Francisco became in the middle of that century. In 1847, “Yerba Buena,” as it was then called, had a population of 700. Within two years, it had ballooned to 25,000. It’s estimated some 300,000 prospectors set out west to make their fortunes in the 1849 Gold Rush, and as the saying goes, everyone made money but the miners. Merchants made a killing, hotels and restaurants cleaned up, and real estate commanded the kind of stratospheric prices with which current residents of San Francisco would surely identify.

This was an opportunity for South America as much as anyone. Before the Panama Canal was dug out in 1914, a ship from Peru, seeking American consumers, would have to head south around the Strait of Magellan, nearly 10,000 nautical miles before hitting New York. But San Francisco, where the spirit of drink was in the air and everyone had money to burn, was a cool 4,000 miles up the Pacific coast. It was easier to get pisco to the Bay Area than it was to get whiskey over the mountains, and with the radically shortened journey, the Peruvians could throw pineapples on the boat as well, and at least some of them wouldn’t rot before they got there. Cocktail author and pisco brand owner Duggan McDonnell says that, once arrived and assembled, a Pisco Punch would’ve cost $25 in today’s money. “Only in the richest city in the world,” he says, “would you take that sweet magical fruit and put it in a cocktail, for God’s sake.”

If San Francisco was the global epicenter of Pisco Punch consumption, which it very much was, the Bank Exchange Saloon was the center of it in San Francisco. At the corner of Montgomery and Washington Streets, in the plot now occupied by the iconic Transamerica Pyramid, the Bank Exchange was the picture of elegance, “marble paved and splendidly decorated.” Kipling’s “no man but one” who knew the recipe wasn’t hyperbole: That man was Duncan Nicol, bartender and proprietor of the Bank Exchange, who mixed them in secret in the off hours and, once Prohibition shut down his bar in 1919, ultimately took the recipe to his grave. So we don’t 100 percent know what was in the original Pisco Punch, though many have made educated guesses (more on that below).

What we do know is that they’re made with pisco and pineapples and citrus, and that they’re absolutely delicious, universally lauded, the lush tropical pineapple gorgeously suited to complement the wild florals of the spirit, good enough to make writers like Thomas Wallace Knox say this kind thing in 1877: “The first glass satisfied me that San Francisco was, and is, a nice place to visit… The second glass was sufficient, and I felt that I could face small-pox, all the fevers known to the faculty, and the Asiatic Cholera, combined, if need be.”

Add all ingredients to a cocktail shaker with ice, and shake well on for 8 to 12 seconds. Strain over fresh ice and garnish with a pineapple wedge.

Pisco: Pisco’s a bit of a mixed bag. It can come from either Chile or Peru, for starters, and there’s different regulations in the two countries. Chile has lots of good pisco, but if I could choose, I’d go Peruvian: The laws are stricter, so you have a better sense of what you’ll be getting. Additionally, it can be made from any of eight allowed grapes, and some of those eight, like Moscatel, are pretty aggressively floral. This isn’t necessarily bad, but if given the option, I recommend finding an “Acholado” (blend), in which the producer has chosen a mix of grapes for good all-around balance. If you are at the store and looking at the single brand of pisco that store carries, I’m sure that will be fine. If it’s good enough to make it to our shelves, it’s almost certainly good enough for this drink.

Citrus: The original recipe called for lemon juice, but in fairness, the original recipe was in 1856 and it’s very unlikely they had the luxury of both lemons and limes, to choose at their fancy. Lemons work, but personally, I much prefer lime juice, the tart zesty finish a welcome contrast to the generous sweetness of the pineapple.

Pineapple Syrup: There was serious work put in to decoding Nicol’s recipe after he died, and the most laudable effort reported that it was made from pisco, lemon, distilled water and pineapple-flavored gum syrup. Gum syrup is a simple syrup combined with gum arabic, a powder derived from the Acacia tree which gives a silky body to cocktails. The effect is subtle but pleasant, and if you have the opportunity, San Francisco’s own Small Hands Foods makes a lovely Pineapple Gum Syrup. If you can’t be bothered, it’s ok, either soak a simple syrup overnight in diced pineapple chunks (for a subtle flavor) or make a pineapple syrup by combining and dissolving equal parts sugar into fresh pineapple juice (for a bolder flavor).

Other Ingredients? Some cocktail people, puzzled about Kipling’s crimson imagery in his “tropical dawn” and “red clouds of sunset,” have deduced that the secret ingredient that made everyone both fall in love with the cocktail and not be able to stop talking about it was, as it turns out, cocaine. Vin Mariani was a Bordeaux-based fortified red wine that was infused with coca leaves, and several historians claim that this was the secret ingredient, the “red clouds” in the Pisco Punch. Lillet Rouge (another fortified red wine from Bordeaux, though this time without the narcotic infusion) is probably the closest thing, and it does indeed mix well in the Pisco Punch, its lush red fruit filling out the more piquant florals from the spirit. It’s certainly interesting to try, though at the end of the day, I feel like it brings more noise than signal.