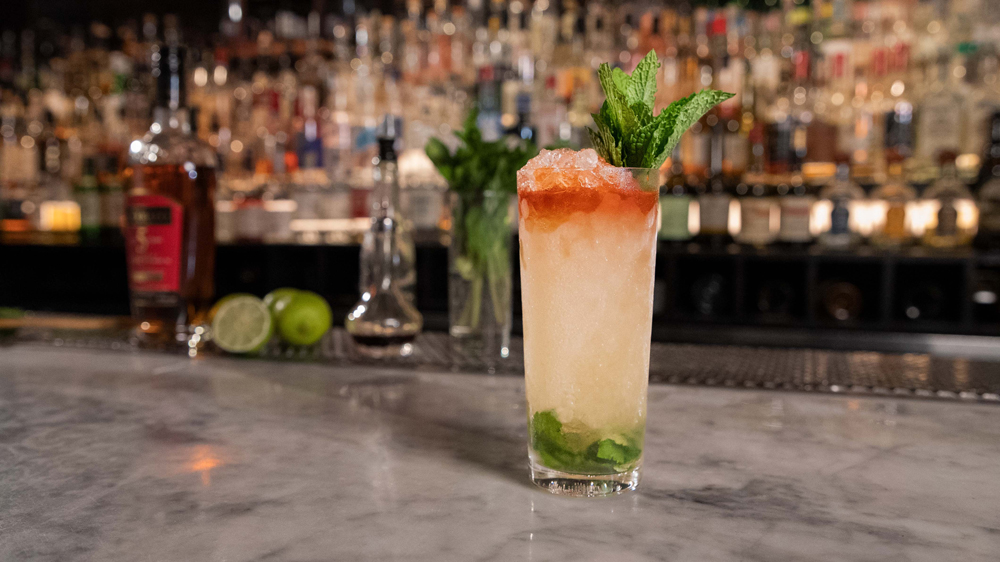 The Queen’s Park Swizzle, for its apparent simplicity, is somewhat difficult to describe. You really just have to try it.

The easiest way to think of the Queen’s Park Swizzle is as a type of Mojito, but that doesn’t quite capture it. It’s not a variety of Mojito so much as it’s the Mojito’s alter ego, or it’s dark twin. If the Mojito is like a lovely evening with your spouse, the Queen’s Park Swizzle is like a beautiful stranger leading you by the hand down a dark hallway towards the sounds of a party you can’t yet see. They do have something in common, but as far as experiences go, it’s a different type of thrill.

The Queen’s Park Swizzle was invented, like so many magnificent old classics, at one of the grand old hotels of the British Empire. Wherever the British set up a colony (at one point covering some 25 percent of the globe), there would tend to be an elegant colonial hotel, to keep the gentry in the aristocratic style to which they had become accustomed. These hotels invariably held bars, and from those stately ruins of empire we take a number of liquid artifacts: In Burma (now Myanmar) was the Pegu Club, where the cocktail of same name was created; in Singapore still stands the Raffles Hotel, from which we get the Singapore Sling; and from the Queen’s Park Hotel in Trinidad comes the Queen’s Park Swizzle, arguably the best of them all.

As mentioned, it has a lot in common with the classic Mojito. They both start with mint, muddled in the glass. Both use lime for acidity and sugar to balance. Both use rum, but importantly, the style of rum differs—the Mojito uses a clean white rum to elevate the mint, while the Queen’s Park Swizzle achieves its best and broodiest self with an aged rum, which gives an indulgent vanilla-spiced depth that first asks for your attention and then holds it. And finally, fully distancing itself from its Cuban brother, the Queen’s Park is finished with a shock of the inimitable Angostura Bitters, sitting rust-red on top of the crushed ice and dominating the nose with mint and spice.

“If you like to make and drink a real doozer of a rum drink that really is a rum drink, try this,” wrote “Trader” Vic Bergeron in his 1972 Bartender’s Guide. This as much as anything highlights the apparent limitations of language—Bergeron knew as much about rum cocktails as anyone on earth, and yet that sentence makes him seem like a buffoon. Much better was his note some 30 years earlier, in his Trader Vic’s Book of Food and Drink where he, seeing forest instead of trees, simply said that the “Queen’s Park Swizzle is the most delightful form of anesthesia given out today.”

Add mint leaves to a tall glass. Add simple syrup and gently muddle mint into the syrup. Add crushed ice two-thirds or so full and agitate (either swizzle back and forth with a swizzle stick or a barspoon, or else just stir) until the glass begins to frost. Add crushed ice to fill and decorate the top with two to three dashes of Angostura Bitters. Garnish with a mint sprig and serve with a straw.

Rum: What rum to use varies pretty wildly, even among experts. Occasionally someone will call for using white rum, which is good but honestly too much like a Mojito. Most everyone, including the earliest available recipes, call for aged rum, and usually from Guyana or Jamaica or both.

My go-to choice here is the so-called “Demerara” rum from Guyana—flagship bottles here are the El Dorado 8 Year, or the Hamilton’s 86 Demerara Rum. Jamaican Rum is good, but the funkiness, for me, draws too much attention without contributing to the whole, like a basketball player who refuses to pass. Another good choice are the light Spanish-style rums which will double down on the vanilla depth, like the Don Q Reserva, or Angostura’s own 5 or 7 year rums. And as far as quantity is concerned, many of the original recipes call for 3 oz. (Bergeron’s “doozer of a rum drink”) which is 50% too much. I’ve brought it down to standard levels.

Demerara Syrup: This drink is at its best when it gets texture and depth from the syrup as well as the rum. This comes from making a simple syrup with less-refined sugar—demerara or turbinado or “Sugar in the Raw,” it’s sometimes called—as opposed to white sugar. If all you have is white sugar you can still make the drink, but Demerara Syrup will add a bit more to the final product.

Either way, combine equal parts sugar and hot water, and stir to dissolve. Keep in the fridge and the syrup should last a month or so.

Bitters: Angostura Bitters are from Trinidad, where the Queen’s Park Hotel was located, and are classic here. They’re also ubiquitous and amazing, and there’s very little reason to make this with anything else. I’ll only note that some very talented people, like the Death & Co. cocktail book, choose to append the Angostura float with a dash of Peychaud’s Bitters. While it certainly doesn’t hurt (it clashed with Jamaican Rum, but you shouldn’t be using that anyway), the only time I thought it actually helped was when the rum was especially vanilla-forward, as with Bacardi’s 8 or something like Zaya Gran Reserva.

Ice: Aside from the Mint Julep, I can’t think of a drink in the classic cocktail canon that so needs crushed ice. To “swizzle” requires it. The flavors all work if you shake it like a normal Mojito or something, but it’s really worth investing the effort to crush some ice: Either buy a bag at your local Ice Company (or Sonic Drive-In, which sells bags for cheap), hammer it yourself with a Lewis Bag & Mallet, pulse it in the blender, wrap it in a tea towel and smash it with a rolling pin, whatever. Crushed ice will dilute quickly, which we want, and helps the bitters stay on top for the presentation.

Layering: Like all layered drinks, you can choose your own plan of attack—you can sip from the top, which is mostly bitters, or sip from the straw, which is no bitters. Personally, after doing one of each just to see what it’s like, I prefer to mix it all together. It’s worth layering just for the look, but once served, the cocktail is at it’s best when you get a bit of everything.