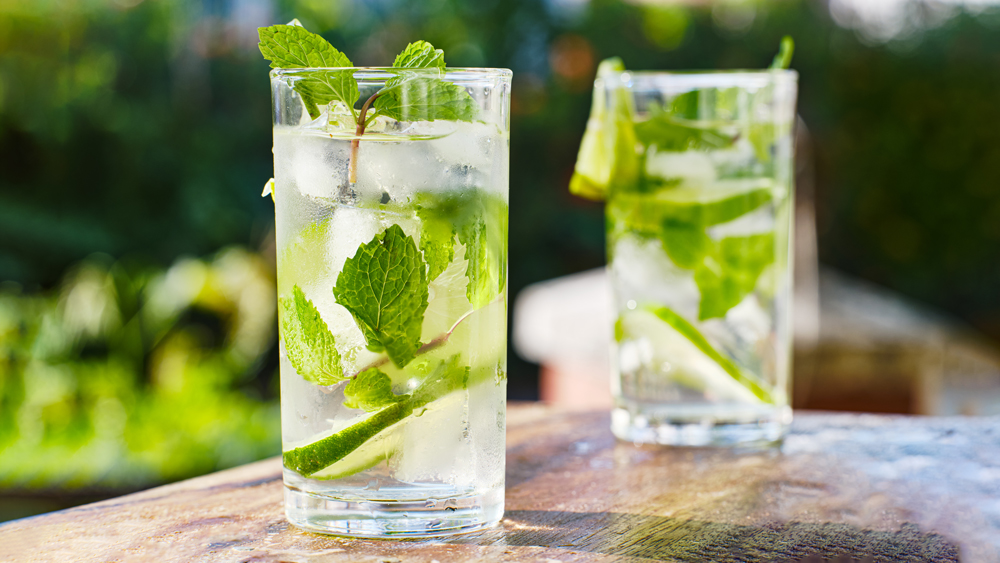 No matter where you are in the country right now—no matter what town you’re in, on what time of what day—the answer to that question is almost certainly, yes. Imagine someone places an icy Mojito into your hand, condensation already beading on the glass, the bright mentholated aroma reaching up to invite you to take a sip. What are you going to say? No?

Rum is the ultimate summer spirit. There are some spirits, like gin, that can easily wear summer clothes, and others, like whiskey, that require a bit more mixological magic to get them to vibe with the sunshine, but rum doesn’t need so much as a raised eyebrow. Rum was born in the sun. Molded by it. There’s some fair disagreement about where specifically rum was invented—some say Barbados in the mid 1600s, while others point to earlier versions in both Indonesia and Brazil—but no matter where it’s from, one thing those places all have in common is that even the winters are hot.

Rum drinks have also gained a reputation for being big buckets of juice. This is understandable, but unjust. Their inextricability from tropical vacations is a double-edged sword because the bars at these places tend to use sugar as a substitute for freshness, precision or training. Fortunately for everyone, properly made rum drinks are never too sweet and are a late-summer revelation—whether it’s the bracing tartness of the traditional Mai Tai or the sultry texture of an Old Cuban, here are eight rum cocktails to get you to through the dog days of summer.

There are two Daiquiris, and for our purposes, we can divide them into the right kind and the wrong kind—and if you believe Daiquiris to be blended concoctions of sour mix spiked with rum so cheap they don’t sell it in liquor stores, I regret to inform you that you’ve only had the wrong kind. “One is the neon slushy you’d get in Cancun that’s so sweet you involuntarily lick the air after you taste it,” we’ve warned you of previously, “and the other is one of the greatest simple cocktails of all time.” A proper Daiquiri is simply rum, lime and sugar—find out why it’s a great litmus test of a bartender’s skill here, or just make one, below.

Add ingredients to shaker tin, add ice and shake hard for 10 to 12 seconds. Strain off ice into a stemmed coupe glass. Garnish with a thin lime wheel or honestly nothing at all and enjoy while reflecting that the best things are often the simplest.

The Queen’s Park Swizzle is like the alter ego of the Mojito, it’s dark twin. “If the Mojito is like a lovely evening with your spouse,” we write, “the Queen’s Park Swizzle is like a beautiful stranger leading you by the hand down a dark hallway towards the sounds of a party you can’t yet see.” They share a build—rum, lime, simple syrup and mint—but the Queen’s Park trades the Mojito’s easy brightness of light rum for the indulgent vanilla notes of an aged rum, and adds a spicy shock of Angostura Bitters on top, all supercharged by the chilling power of crushed ice. Make one with the recipe below, or click here to find out who called the cocktail “ the most delightful form of anesthesia given out today.”

Add mint leaves to a tall glass. Add simple syrup and gently muddle mint into the syrup. Add crushed ice two-thirds or so full and agitate (either swizzle back and forth with a swizzle stick or a barspoon, or else just stir) until the glass begins to frost. Add crushed ice to fill and decorate the top with two to three dashes of Angostura Bitters. Garnish with a mint sprig and serve with a straw.

The Piña Colada is a vacation in itself, “the cocktail equivalent,” we say, “of the guy at the bar wearing a Hawaiian shirt who keeps trying to strike up conversations with everyone, and whom you end up liking despite yourself.” It is as much as anything responsible for the sugary reputation of rum drinks, but with a lighter hand on the coconut and a little added lime juice, it can be transcendent. Honestly, even bad ones are pretty good, and good ones are phenomenal. Find out which of the three competing origin stores has the most truth to it here, or just make one, below.

If using pebble ice: Add all ingredients to a cocktail shaker with a handful of pebble ice and “whip” to mix everything together. Dump contents into a festive glass and pack in as much more ice as will fit.

If using a blender: Add liquid ingredients and about 6-8 oz. ice to a blender and blend on high for about 10 seconds. Empty into a festive glass.

In both cases, garnish with pineapple leaves, an orange slice and a little colorful umbrella, if you’ve got it.

It was at the bar La Floridita, in Havana, where Ernest Hemingway commissioned this unusual little Daiquiri variation in 1939. Lead barman Constantino Ribalaigua had created the excellent Daiquiri #3, with grapefruit and maraschino liqueur. Hemingway—both a diabetic and a savage alcoholic—didn’t like sugar in his drinks, so he threw out most of the sweetness and, just for fun, doubled the rum. This puts us in a bind, we write: “Hemingway’s version is, simply put, unacceptable,” both too tart and too strong, and “no one even considers making it his way.” Check out the three ways modern bartenders adapt this recipe here, or just make our favorite, below.

Combine ingredients in a cocktail shaker with ice, shake well for 10 seconds, and strain into a stemmed glass. Garnish with a Maraschino cherry.

“Across the entire classic cocktail universe,” we claim, “no drink has suffered more indignity—had more liquid crimes done in its name—than the Mai Tai.” Like the Daiquiri, you might think you know what the Mai Tai is about, but if you’re picturing a deathly sweet, over-juiced concoction, you’re picturing the wrong one. The original 1944 Mai Tai is just rum, lime, orange liqueur and almond—tart and bracing, and among the strongest of the classic cocktails. Find out what Mai Tai means (and how it became the sugar-embalmed zombie version of itself) here or make one for yourself with the recipe below.

Add all ingredients together in a tin with crushed ice. Shake briefly, about five seconds and empty contents into a tropical-looking 14 oz.-ish glass. Pack with more crushed ice and garnish with a juiced lime husk and a sprig of mint, so it looks like a palm tree on a small green island.

The Old Cuban—aged rum, lime, simple syrup, and mint, with Angostura Bitters and Champagne—is very often described as a combination of a French 75 and a Mojito, but we think that’s not quite right. Both of those latter cocktails are pure brightness, while the vanilla from the aged rum and the spice from the bitters in the Old Cuban “moves it from poolside to inside,” we write, “as if under a slowly twisting ceiling fan in a smoky room, long narrow beams of light through the wooden shutters.” It is the darker side of refreshing, the more alluring and seductive side, and has our vote for one of the best cocktails invented in the last 20 years. Try one out below, or find out why it is, in fact, neither old nor Cuban, here.

Add all ingredients except wine to a cocktail shaker with ice, shake well for 10 to 12 seconds and strain into a flute or stemmed cocktail glass. Top with wine and garnish with a mint leaf or sprig.

The Painkiller is one of only a handful of drinks that has been patented by a liquor company, so legally speaking, there’s only one recipe we’re allowed to say is a Painkiller, and unfortunately, it isn’t all that good. But Painkiller-adjacent recipes can be phenomenal—some incorporate lime and/or passionfruit to shock the whole thing to life, and some just use a different rum to add richness. Either way, it’s a template too good to be ignored—find out the sordid history of the drink, involving corporate espionage and a run in with the Royal Navy here, or just make one according to the recipe below.

Shake on crushed or cracked ice for four to six seconds and dump contents into a tall glass or tiki mug. Top with more crushed ice. Garnish with a grind of nutmeg if you have it, or a slice or orange, or pineapple leaves, or all three.

And, of course, the Mojito, the drink that’s like a beachy Cuban summer in a glass. It’s light, bright, effervescent and fresh. There was a time when the Mojito was the bane of bartenders back in the early aughts when the drink was popular but the craft cocktail movement hadn’t really found its sea legs yet. So that usually meant this drink felt like a chore to make during an era of Jack and cokes and vodka-sodas. But once we introduced fresh ingredients and proper technique across the world of cocktails, it was time to reclaim the Mojito’s honor. We share some techniques here to make yours better, or go by the simple instructions below.

Add all ingredients to cocktail shaker and shake. In a tall glass, gently muddle an additional three to five mint leaves. Shake the cocktail and strain into the glass over fresh ice. Top with 1 to 2 oz. soda water. Garnish with two mint crowns (the top of the plant) twisted together to form a bushy mint explosion on top.

Every week bartender Jason O’Bryan shares his favorite drinks recipes. If you missed it, catch up on last week’s featured cocktail.